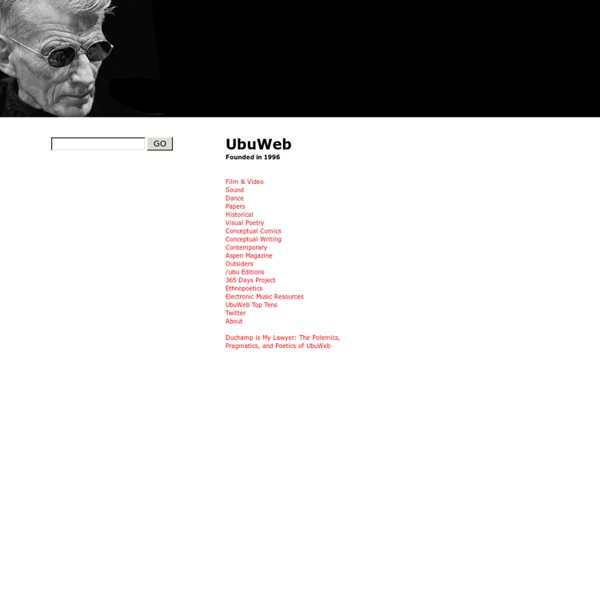 UbuWeb | Spring 2014 Robert Ashley, 1930-2014 UbuWeb mourns the passing of the great American composer Robert Ashley. You can listen to his music and invterviews here, watch his films here, read about him here. If you're unfamiliar with his work, the best place to start is Peter Greenaway's documentary Four American Composers: Robert Ashley (1983). His most well-known video work is Perfect Lives (1978-83), a television opera in seven parts. He interviewed composers such as Terry Riley, Philip Glass, Alvin Lucier, Pauline Oliveros, David Behrman, and Gordon Mumma in his epic video series, Music With Roots in the Aether, where interviews are followed by performances.

Fifteen Million Merits 2nd episode of the first season of Black Mirror "Fifteen Million Merits" is the second and penultimate episode of the first series of British science fiction anthology series Black Mirror. It was written by series creator and showrunner Charlie Brooker and his wife Konnie Huq (credited as Kanak Huq) and directed by Euros Lyn, and first aired on Channel 4 on 11 December 2011. In a world where most of society must cycle on exercise bikes in order to power their surroundings and earn currency called "Merits", the episode tells the story of Bing (Daniel Kaluuya), who meets Abi (Jessica Brown Findlay) and convinces her to participate in a talent game show to escape the slave-like world around them.

Controversial artist Richard Prince sued for copyright infringement Richard Prince, a New York-based artist whose work often involves appropriating that of others, has been sued for copyright infringement by Donald Graham, a photographer who claims Prince knowingly reproduced his photo Rastafarian Smoking a Joint without seeking permission. Artnet reports that Graham filed a complaint on 30 December against Prince, the Gagosian Gallery – where Prince’s New Portraits exhibition ran between September and October 2014 – and Lawrence Gagosian, the gallery owner. The New Portraits collection featured 37 inkjet prints on canvas of what Prince called “screen saves” of Instagram posts, according to the complaint.

Warhol & The Computer I don’t tend to associate legendary Pop artist Andy Warhol with the computer. My first thoughts go to Campbell Soup cans, Marilyn Monroe, and his film works. While most of Warhol’s creative output happened in the 1960s, when only a few serious artists had access to and used computers, he continued to paint and create artworks up until his death in 1987. Towards the end of his life, he began to create works using Amiga computers. It should be no surprise that Warhol was interested in computers; he’d been fascinated with popular culture for decades and computers had moved beyond being mysterious tools to become items encountered in everyday life.

Tarkovsky Films Now Free Online Andrei Tarkovsky (1932-1986) firmly positioned himself as the finest Soviet director of the post-War period. But his influence extended well beyond the Soviet Union. The Cahiers du cinéma consistently ranked his films on their top ten annual lists. Ingmar Bergman went so far as to say, "Tarkovsky for me is the greatest [director], the one who invented a new language, true to the nature of film, as it captures life as a reflection, life as a dream." And Akira Kurosawa acknowledged his influence too, adding, "I love all of Tarkovsky's films. I love his personality and all his works.

PennSound PoemTalk 75: on Will Alexander's "Compound Hibernation" Posted 4/8/2014 Today saw the release of the landmark seventy-fifth episode in the PoemTalk Podcast series — an exploration of Will Alexander's poem, "Complete Hibernation," which was first published in Zen Monster before appearing in the 2011 collection, Compression & Purity. Why the Web Won't Be Nirvana After two decades online, I'm perplexed. It's not that I haven't had a gas of a good time on the Internet. I've met great people and even caught a hacker or two. Richard Prince Moves to Dismiss Lawsuit—artnet News Donald Graham’s photograph, left, and Richard Prince’s appropriation of it. Appropriation artist Richard Prince hopes a court will throw out the latest copyright infringement lawsuit against him, and has filed a motion to dismiss the case. Photographer Donald Graham filed suit against Prince in January, asserting that one of the works in Prince’s 2014 exhibition “New Portraits,” at New York’s Gagosian Gallery, improperly used one of his photographs, showing a bare-chested Rastafarian man with long dreadlocks smoking a joint.

Using digital images You are permitted to use images from the British Museum website subject to our terms of use. If you require a higher resolution image (with the longest edge at 2,500 pixels, which will appear at a maximum of 21 cm when printed at 300 dpi), you can request it using the free image service below. You will need to register with your name, address and email address, and the image will be sent to you as an email attachment. The image will be released to you under a Creative Commons Attribution-NonCommercial-ShareAlike 4.0 International (CC BY-NC-SA 4.0) license. You can read more about the British Museum and Creative Commons here.

Grant Morrison’s 18 Days From Grant Morrison, the acclaimed writer of Batman, and superstar artist, Mukesh Singh comes “18 Days”, the story of three generations of super- warriors, meeting for the final battle of their age. 18 Days is a re-imagining of the great myth, the Mahabharata and follows the course of the climactic war that concludes the age of the gods and begins the age of man. 18 DAYS is the prototype for every war ever fought. The scale is epic, wherein the biggest armies ever conceived of face one another across the ultimate battlefield to decide the fate of the future. This hardcover illustrated book and digital e-book from Graphic India will allow readers a first glimpse into the mythic animated series being developed by Morrison. The book reveals the inner workings of the acclaimed writer’s process and features the original animation scripts, story bibles, character descriptions and commentaries.