How to Finish Your Work, One Bite at a Time 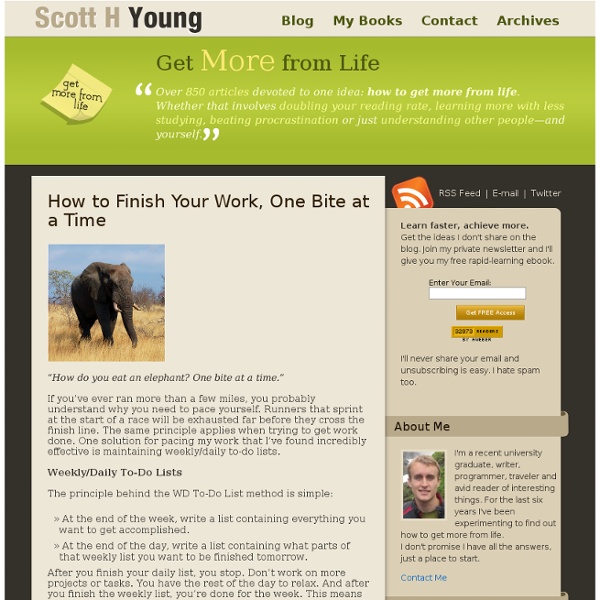 “How do you eat an elephant? One bite at a time.” If you’ve ever ran more than a few miles, you probably understand why you need to pace yourself. Runners that sprint at the start of a race will be exhausted far before they cross the finish line. The same principle applies when trying to get work done. Weekly/Daily To-Do Lists The principle behind the WD To-Do List method is simple: At the end of the week, write a list containing everything you want to get accomplished.At the end of the day, write a list containing what parts of that weekly list you want to be finished tomorrow. After you finish your daily list, you stop. Although this technique might sound obvious (and it is), there are some key advantages using a WD system has over the typical, Getting Things Done approach of keeping Next Action or project lists. Why the Weekly/Daily To-Do List System Rocks: After using this method for several months, I’ve found it beats the other systems in a few key places: Focus on the Daily List

This 15-Minute Activity Will Make You More Successful At Work 8 Things Everybody Ought to Know About Concentrating “Music helps me concentrate,” Mike said to me glancing briefly over his shoulder. Mike was in his room writing a paper for his U.S. History class. On his desk next to his computer sat crunched Red Bulls, empty Gatorade bottles, some extra pocket change and scattered pieces of paper. Mike made a shift about every thirty seconds between all of the above. Do you know a person like this? The Science Behind Concentration In the above account, Mike’s obviously stuck in a routine that many of us may have found ourselves in, yet in the moment we feel it’s almost an impossible routine to get out of. When we constantly multitask to get things done, we’re not multitasking, we’re rapidly shifting our attention. Phase 1: Blood Rush Alert When Mike decides to start writing his History essay, blood rushes to his anterior prefrontal cortex. Phase 2: Find and Execute Phase 3: Disengagement While in this state, Mike then hears an email notification. The process repeats itself sequentially. 1. 2. 3. 4. 5. 6.

Time Management Tips: How to Find the Right Mindset to Succeed With Time Management | The Best Time Management Tips For the past several years I have worked with time management techniques such as lists, prioritization, planning and so on. But it wasn’t until I adopted a Quadrant 2 mindset that I really started seeing results. The phrase “Quadrant 2” comes from Stephen Coveys book The 7 Habits of Highly Effective People . 1. How to tackle the different tasks Each task needs to be tackled in a specific way, at a specific time and handled right. them the repercussions could be bad. tasks as you do when working in Quadrant 1 but without all the stress and pressure of the first quadrant. working on time management I want you to remember this mindset, use all the exercises we discuss to further increase the time you spend in Quadrant 2 and decrease the time you spend in the other Quadrants. on how to become efficient you should join The Time Management Expert Course. system that can save you over 2000 hours/year, time that can be put to better things, like living life! Need More Time In Your Life? Comments

The Myth of Multitasking Christine Rosen In one of the many letters he wrote to his son in the 1740s, Lord Chesterfield offered the following advice: “There is time enough for everything in the course of the day, if you do but one thing at once, but there is not time enough in the year, if you will do two things at a time.” To Chesterfield, singular focus was not merely a practical way to structure one’s time; it was a mark of intelligence. “This steady and undissipated attention to one object, is a sure mark of a superior genius; as hurry, bustle, and agitation, are the never-failing symptoms of a weak and frivolous mind.” In modern times, hurry, bustle, and agitation have become a regular way of life for many people — so much so that we have embraced a word to describe our efforts to respond to the many pressing demands on our time: multitasking. In the late 1990s and early 2000s, one sensed a kind of exuberance about the possibilities of multitasking. Dr. Changing Our Brains Other experts aren’t so sure.

Dubstep Music: Here to remind you why it's cool to have ears 17 Small Productivity Habits The Mini-Habit The idea behind mini habits is that you can get to a larger habit if you start small, create simple goals, and aim for consistency. In his book Mini Habits: Small Habits, Bigger Results, Stephen Guise gives the example of “The One Pushup Challenge.” In Habit Stacking: 97 Small Life Changes That Take Five Minutes or Less, author S. The core idea behind the mini-habits concept is that you can build a major habit by thinking small enough to get started. Habit-Stacking The purpose of habit-stacking is to create simple and repeatable routines (managed by a checklist). According to Scott there are 8 Elements of a habit-stacking routine. Each habit takes less than five minutes to complete.It’s a complete habit.It improves your life.It’s simple to complete.The entire routine takes less than 30 minutes.It follows a logical process.It follows a checklist.It fits your life. 17 Small Productivity Habits #1 Drink a Large Glass of Water #2. #3. #4. #5. #6. #7. #8. #9. #10. #11. #12. #13.

NEW YORK NIGHT TRAIN The Brain-Based Secret to Personal Productivity By now, you've probably already broken most of your New Year's resolutions. You're not alone: Only about 8 percent of those who make them keep them. But it may not be that you'll never lose weight or learn a foreign language. If you aren't being productive or if you feel off track, it could simply be because you haven't set yourself up for success in a way that suits your individuality. Take a typical New Year's resolution like running. Let's apply this to work. In my work, we've uncovered four ways of thinking that every person exhibits. Here's your challenge: Find which way of thinking (or what combination of ways) fits you. Structural. Analytical. Social. Conceptual. In all four scenarios, the goal is the same: getting things done. Imagine Jack vowing to "be a little less rigid this year, maybe a little more like Natalie." Behavioral preferences, such as expressiveness, assertiveness, and flexibility, will also play a key role in your productivity this year.

Monotasking Is The New Multitasking We all know multitasking is inefficient. A classic 2007 study of Microsoft workers found that when they responded to email or instant messaging alerts, it took them, on average, nearly 10 minutes to deal with their inboxes or messages, and another 10-15 minutes to really get back into their original tasks. That means that a mere three distractions per hour can preclude you from getting anything else done. Then there’s the relationship “inefficiency” that comes from multitasking. We know this, yet we keep doing it. No human activity is immune. Fortunately, there are ways to learn to focus. Live right There are many reasons to exercise, hydrate, and get enough sleep--and the ability to fight distractions is one of them. Tie yourself to the mast To resist the original siren song, Odysseus bound himself to his ship so he couldn’t pursue these tempting creatures. Play offense Don’t tolerate boredom Bregman once spent a week consciously avoiding multitasking. Plan Accept your limits

Demolition Songs: Bruce Springsteen, Gillian Welch and the “Wrecking Ball” Tradition In January, an insider “earwitness” told the Hollywood Reporter that Bruce Springsteen’s forthcoming album Wrecking Ball will represent the 62-year old’s “angriest yet.” Since history has found Springsteen at his most vitriolic when writing from headlines, it seems safe to assume that album 17 will find the Boss in topical-mode. His exact targets, however, remain a mystery. Contrary to initial speculation, the record was completed months before the Occupy movement started gaining traction. If the Reporter’s source is accurate (lead single “We Take Care of Our Own” struck us as more anthemic than angsty), Springsteen will join a veritable demolition crew of American artists who have carved frustrated statements out of albums and songs entitled “Wrecking Ball.” It’s a tradition that began in 1995, when country legend Emmylou Harris employed the title on an album that would signify a major turning point in her career. The mid-nineties marked a rough period for country’s elder stateswomen.