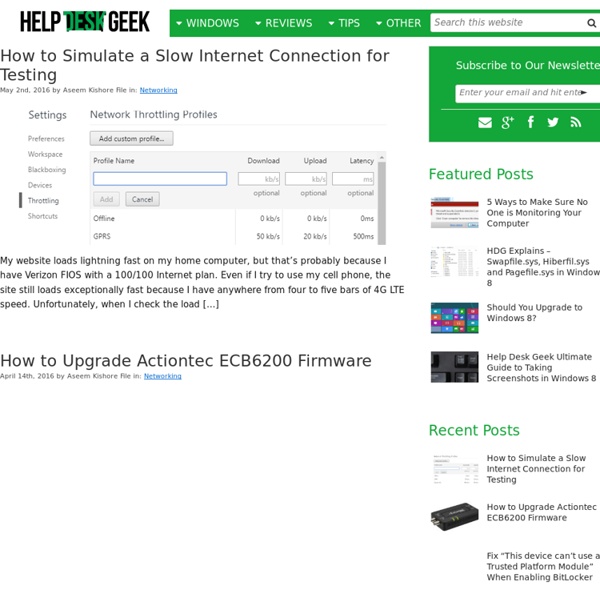 I recently tried to enable BitLocker on an old Windows 8.1 PC at home and got an error message that I found would be extremely cryptic to anyone who isn’t a computer geek. Here was the message: This device can’t use a Trusted Platform Module. Your administrator must select the “Allow BitLocker without a compatible […] If you’ve been on sites like YouTube while using your new shiny Windows 8 computer running IE 11, you might have run into a very annoying issue where the browser crashes or freezes for no apparent reason. Actually, it’s mostly related to IE 11 because I’ve had several clients complain about the browser crashing on […] Microsoft loves to confuse their users as most people have found out using Windows 8.

Change the Windows 7 Login Screen Background Image When you login to your Windows 7 computer (assuming you haven’t used something like this tutorial to turn on automatic login), you’ll generally see a login window with a background looking something like this. It’s fine; there’s nothing wrong with it. But sometimes a change is good so in this article we’ll show you how to change the background image behind the login screen to anything you want. The first step is to open up the Start Menu by clicking the orb in the lower left corner of the screen. Orbot: Tor for Android – Guardian Project Orbot is a free proxy app that empowers other apps to use the internet more securely. Orbot uses Tor to encrypt your Internet traffic and then hides it by bouncing through a series of computers around the world. Tor is free software and an open network that helps you defend against a form of network surveillance that threatens personal freedom and privacy, confidential business activities and relationships, and state security known as traffic analysis.

HTML 5 Cheat Sheet - Including Free PDF Download Posted at 13:04h in Web Cheat Sheets by Jamie Cheat sheets; don’t you just love them? I love them as they offer me a simple way to recall a software program or help me to learn a new skill. Plus there’s always a useful keyboard shortcut to forget, a command you will just fail to remember, a newly introduced function that slips your mind or element you cease to think of. So to get things rolling with my up and coming series of HTML5 tutorials and guides which I will be sharing on MakeaWebsiteHub.com I have spent the last few days creating this HTML 5 “Mega” cheat sheet for all you front end types to get your little hands on. So whether you are a web design novice or a seasoned grizzly veteran this will hopefully come in use for your next project.

Remote Desktop Manager - Add On Instructions Download the add-on you want or use the Add-on Manager from the application Unzip the files in the installation folder of Remote Desktop Manager Restart Remote Desktop Manager Create a new session with the newly installed add-on type Suggest An Add-on Translate Take Ownership Of Files & Folder And Change Permissions In Windows 8 Like its predecessors, Windows 8 imposes strict access permissions on system-wide locations, folders and files. These access permissions restrict unauthorized users (including clients on network, and standard and guest users on local PC), and external sources (malicious scripts, viruses, malwares etc), from accessing core system folders and files. You may know that, when a malicious script attacks a system, it attempts to gain admin or root access to the system to exploit security vulnerabilities. In contrast to previous Windows versions, Windows 8 comes with an enhanced, and robust Advanced Security Settings, making it difficult for a novice users to gain complete control over the system locations, folders and files. The file permission is a pre-defined rule that is associated with numerous system objects/users, preventing unauthenticated objects from taking full control over the system files. To begin, move to location where system file that you want to modify, is residing.

20 Windows Keyboard Shortcuts You Might Not Know Mastering the keyboard will not only increase your navigation speed but it can also help with wrist fatigue. Here are some lesser known Windows shortcuts to help you become a keyboard ninja. Image by Remko van Dokkum Global Windows Shortcuts Win+1, 2, 3, 4, etc. will launch each program in your taskbar. Hot Keys 101 – Learning Technologies and Consulting So, you’re typing along and think, “Ok, I should save this.” What do you do? If you’re like most of us, you move your hand off the keys to the mouse or trackpad, move the cursor up to the button, then move your hand back the to the keys.

Tools of Creation - Like many kids, my own children would spend endless hours with their Wii or their Nintendo DS systems. Unfortunately for my own children, they have mean parents who restrict their time, kick them outside to play (one of the advantages of living in a small town) and who won’t let them play World of Warcraft, Medal of Honour, (inset other random shoot ‘em up game). But, being a geek, I’m always interested in what they are playing, what’s hot, and what’s coming out. One thing that I’ve noticed more and more is that s lot of the games they buy are not only gaming platforms, but they can be used as engines of creation as well. This isn’t new.

Interface with Remote Power Sockets – Final Version « Rayshobby In previous blog posts, I’ve described two ways to use an Arduino to interface with an off-the-shelf remote power sockets / switches. The first method uses transistors to simulate button presses. It involves some soldering and hacking the remote control unit. Completely Uninstall Programs And More With Revo Uninstaller Don’t you hate it when you try to uninstall a program it either does not include an uninstaller or when using Add / Remove Programs in Windows, there are several traces of the software left? It is definitely one of my bigger pet peeves … just check out my iTunes uninstall rant. I came across a cool little program the other day that claims to do a much better job of uninstalling applications and all of the tidbits and left-overs associated with them. Revo Uninstaller.