Do Cell Phones Belong in the Classroom? 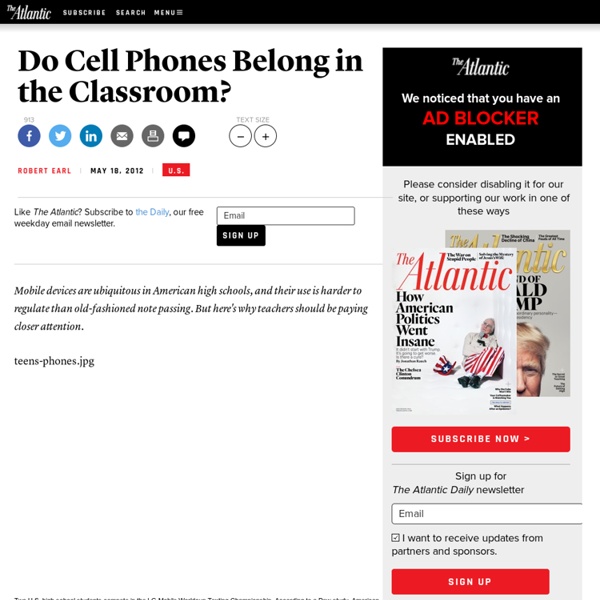 Mobile devices are ubiquitous in American high schools, and their use is harder to regulate than old-fashioned note passing. But here's why teachers should be paying closer attention. Two U.S. high school students compete in the LG Mobile Worldcup Texting Championship. According to a Pew study, American teenage girls send an average of 100 messages a day. (Reuters) If you were to drop in on most any American high school these days, what would you see? Most schools allow students to have cell phones for safety -- a reaction to the Littleton, Colorado, high school shooting incident of 1999. At a time when middle-class homes are filled with computers and mobile devices, schools are grappling with the question of how much technology to bring into the classroom. But whatever a school's approach to technology, cell phones seem to be nearly ubiquitous. In some cases, schools have actually embraced cell phones and incorporated them into their teaching. So what's the solution?

Lift the Cell Phone Ban Cell phones could become the next big learning tool in the classroom. So why have schools been so slow to embrace them? Without a doubt, cell phones can cause serious disruption in the classroom. From urgent text messages flying across the room to lessons interrupted by rap-song ringtones, these gadgets are responsible for nationwide frustration among educators. And, in extreme cases, students have used their cell phones to cheat on tests and harass other students, even during class time. Cell Phone Solution between the alarms, calls, and text-messaging, it’s easy to see why some classrooms have implemented a no-cell phone policy. Craik’s program started with a discussion in the staff room between the school’s principal, Gord Taylor, and teacher Carla Dolman. Testing the Watersinitially, only about 40 percent of the class had cell phones, but kids who had them were willing to share. Principal Taylor agrees. Taylor’s colleagues have been more enthusiastic.

Cell Phones at School: The Debate of Legitimacy | Christian School Solutions | Articles | BJU Press <<< Christian School Solutions Articles On at least one school issue, many parents find themselves agreeing with their children rather than their teachers: that is the permissible use of cell phones at school. Many parents and students vigorously support the legitimacy of allowing cell phones in the classroom, but most teachers still oppose the practice. Proponents on both sides of the issue advance compelling arguments. The Advantages School safety—Many parents adamantly defend cell phones at school for safety purposes. The Disadvantages Distraction—Those who oppose cell phones in the classroom cite the reality that cell phones distract students from their studies. The Solutions Prohibition—Some schools ban cell phone use altogether from the classroom. It seems clear that cell phone technology is here to stay. Dr.

N.J. schools go BYOD: Students get green light to use cellphones in class Come September, High Point Regional High School is going BYOD. Short for Bring Your Own Device, BYOD is a fast-growing business trend quickly taking root in schools. Just as businesses allow employees to use their own mobile devices, school officials are giving students the opportunity to use their phones, tablets or laptops in class. "We’re changing the way we teach," said Robert Zywicki, director of curriculum, instruction and technology at the Sussex County district. "It’s about getting the kids access to the tools they need to compete in our global society." High Point Regional is one of the state’s newest members of a growing BYOD club. It’s a dramatic departure from the previous approach that banished student smartphones to lockers and backpacks. But it comes with some tricky issues. School is the perfect place for these lessons, proponents say. "We are teaching digital citizenship. "To ignore (the devices) seems almost silly," he said.

Using Smartphones in the Classroom By Edward Graham Found in: Advice and Support Ken Halla knows a thing or two about using technology in the classroom. For the past 5 years, the 22-year teaching veteran has worked to transition his ninth-grade World History and AP Government classrooms into a mobile device-friendly environment where students can incorporate the latest technology into the learning process. “Not every classroom can get a laptop every day, so [devices like smartphones], even if you have to pair up, become something useful for teachers,” Halla says. “The number of kids with phones has just been blown out of the water the last couple of years,” he adds. According to data compiled by the research firm Nielsen, 58 percent of American children from 13- to 17-years-old owned a smartphone as of July 2012—an increase of more than 60 percent over the previous year. Here are Halla’s top tips for using mobile devices effectively in the classroom. Ensuring it stays academic Apps for the social sciences

Cell Phones in the Classroom: What’s Your Policy? April 15, 2013 By: Sydney Fulbright, PhD in Effective Classroom Management Are we old fuddy-duddies when we ask (demand) students to put away their cell phones in the classroom or clinical areas? Research has indicated that student performance is significantly correlated with cell phone use. So what is the answer to this new form of passing notes in class? Once the instructor has a clear understanding of the potential positive or negative impact of allowing cell phone use, he or she must clearly state policies in the syllabus. Most universities do not have a campus-wide policy concerning cell phones in the classroom. References: Duncan, D., Hoekstra, A., & Wilcox, B. (2012). Tindell, D. & Bohlander, R. (2011). Sydney Fulbright, PhD, MSN, RN, CNOR, is an associate professor in the College of Health Sciences at the University of Arkansas – Fort Smith. Tags: cell phones in college classrooms, classroom distractions, classroom management, writing an effective syllabus

30 Futuristic Phones We Wish Were Real Mobile phone business is one of the most rapid growing industries. Not so long ago, the popular check phone was Nokia 3310 with mere basic functions: call, text messaging and the only bearable game, snake. However, significant improvement has been made since then. We now have so many variety of phones that surpasses the basic function, smart phones for example allows you to connect to social media conveniently, GPS, video conferencing etc. What will be next? What we can expect from the next generation of handsets that will be available in the next 10 year? In this article we want to show you a list of creative and interesting futuristic phone concepts. Kyocera’s Flexible, Folding Phone ConceptKyocera’s EOS folding concept phone incorporates a flexible OLED screen, changing its form from a clamshell into something resembling a wallet or clutch-purse. Multimedia Concept PhoneDesigner Jakub Lekeš tries to push the limits of phone designing with his concept.

Learn2luvcell: A Powerful Multipurpose Mechanism for Learning Query most secondary school teachers on the subject of cell phones, and you're likely to get an impassioned rant about the device's insidious ability to provoke distraction in the classroom. All that giggly sub rosa texting not only robs students of attentiveness, they say, but also presents an inveterate disciplinary problem. It's why most school districts have strict cell phone policies, and most teachers are grateful for it. But some forward-looking educators have begun to push the subversive idea that the high tech wizardry of mobile phones can be a powerful multipurpose mechanism for learning. Podcasts, video interviews, polling, quizzes, even homework assignments, can all be accomplished via cell phone to enhance students' learning experience, while the phone can also act as a versatile electronic aid to the teacher. Kolb cites the example of a student studying ecosystems in science class. This could prove a hard sell to teachers who see cells only as a bane to good order.

Innovative Ideas for Using Cell Phones to Summarize and Take Notes Editor's note: This is part two in series of posts focused on the nine instructional strategies that are most likely to improve student achievement across all content areas from the book Classroom Instruction That Works by Robert Marzano, Debra Pickering, and Jane Pollock. Summarizing and note taking promote greater comprehension by asking students to analyze a subject and determine what is most important and share that information in a new way that makes sense given the task at hand. According to research, this requires substituting, deleting, and keeping some information while having an awareness of the basic structure of the information presented. To do this students must be able to analyze information at a deep level. Here are some ideas for ways that strategies to summarize and take notes can be enriched with cell phones. Classroom Practice in Summarizing: The "Rule-Based" Strategy Classroom Practice in Summarizing: Summary Frames Classroom Practice in Note Taking

Cellphones in the Classroom: Distraction or Tool? The final version of the National Education Technology Plan (NETP) was released last week, setting forth the Obama Administration's plan for improving access to and integration of technologies for teaching and learning. Among the recommendations the Department of Education makes in the NETP is a call for support for "efforts to ensure that all students and educators have 24/7 access to the Internet via devices, including mobile devices, and that states, districts, and schools adopt technologies and policies to enable leveraging the technology that students already have." The push for "24/7 access to the Internet" falls under another the auspices of yet another endeavor, the National Broadband Plan. But the call for better access to Internet-ready devices, particularly utilizing tools the students already possess is an interesting one. Because the device that is ubiquitous for American students isn't the desktop computer or the notebook or the netbook or the iPad. It's the cellphone.

Robert, Earl (2012). Do cell phones belong in the classroom. Retrieved from by estherpepin Mar 9