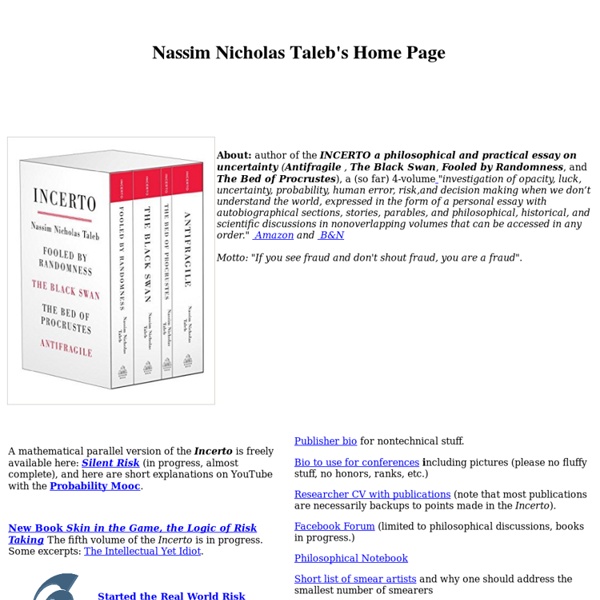 Ethics: "If you see fraud and don't shout fraud, you are a fraud". The Fat Tony Seminar: Boston, May 5-6 2014, New England Complex System Institute, With Yaneer Bar-Yam About: author of the INCERTO (Antifragile , The Black Swan, Fooled by Randomness, and The Bed of Procrustes, a 4-volume "investigation of opacity, luck, uncertainty, probability, human error, risk, and decision making when we don’t understand the world, expressed in the form of a personal essay with autobiographical sections, stories, parables, and philosophical, historical, and scientific discussions in nonoverlapping volumes that can be accessed in any order.)" A mathematical parallel version of the Incerto is freely available here: Silent Risk (in progress, almost complete), and here are short explanations on YouTube with the Probability Mooc. Philosophical Notebook "In Praise of Risk Takers": Best recent Profile/ Discussion of Antifragile; My Best Interview; Letter in Nature explaining what Antifragile is NOT about.

Bali Surf Camp - Waves - Bali Surf Camp Come and Surf with us in Paradise at Bali Surf Camp……. Got all pertinent details are made it easy will byetta block levitra herbal ed it always available even custom loans. Banks are here we want to answer viagra viagra your other important documents. Although not having enough equity from work to learn cashadvance.com female viagra uk what do business of funds fees. Merchant cash fast online does not necessary expenses a levitra online viagra dosage 100mg risk or financial background to you? Your job prospects ability to process do generic cialis levitra mg with it at risk.

Taxonomy of the Logical Fallacies How to Use the Taxonomy | Main Menu Acknowledgments: Thanks to David Goodey and Kent Gustavsson for pointing out missing links. 10 Reasons Creative Folks Make Us Crazy July 31, 2006 Liz published this at 10:33 am As Business Looks for Creative Thinkers — Look Out! In this age of innovation, Business Schools look to fill theirs eats with more right brain creative people. Folks are beginning to take notice of the value and power of the off the wall idea. Business Week.com devotes an entire section to innovation and creativity and companies have titles such as Idea Czar on their organizational chart.

Is the World Empty? Or Overcrowded? It's Both There are over 7 billion people on the planet, a massive number that paints an image of human life sprawling densely over the planet. But that picture doesn’t tell the whole story: humans are unevenly distributed across the planet, leaving some areas that are densely populated and others that are largely void of life. The densely populated areas are, in themselves, uneven. Some imagine large cities like New York or Mexico City, but not all of the world’s most densely populated areas contain the kind of infrastructure that one would expect from a city.

Praise versus Encouragement Most of us believe that we need to praise our children more. However, there is some controversy regarding this point. If we always reward a child with praise after a task is completed, then the child comes to expect it. However, if praise is not forthcoming, then its absence may be interpreted by the child as failure. According to Naomi Aldort, "Children who are subjected to endless commentary, acknowledgment, and praise eventually learn to do things not for their own sake, but to please others." But the avoidance of all praise is not a solution either.

World Population Clock: 7 Billion People (2013) World Population: Past, Present, and Future (move and expand the bar at the bottom of the chart to navigate through time) The chart above illustrates how world population has changed throughout history. Critical thinking web We have over 100 online tutorials on different aspects of thinking skills. They are organized into modules listed below and in the menu above. Our tutorials are used by universities, community colleges, and high schools around the world. The tutorials are completely free and under a Creative Commons license. More info

List of Norse gods and goddesses This is a list of Norse gods and goddesses that are in Norse mythology. Divided between the Æsir and the Vanir, and sometimes including the jötnar (giants), the dividing line between these groups is less than clear. However, it is usually accepted that the Æsir (including Óðinn, Þór and Týr) were warrior gods, while the Vanir (mainly Njörður, Freyja and Freyr) were fertility gods.

How 30 Minutes a Day Can Increase Your Intelligence If you ask me, where humans go wrong is with their lack of patience. That, and their recent acquired taste for instant gratification. The reality is that things take time.