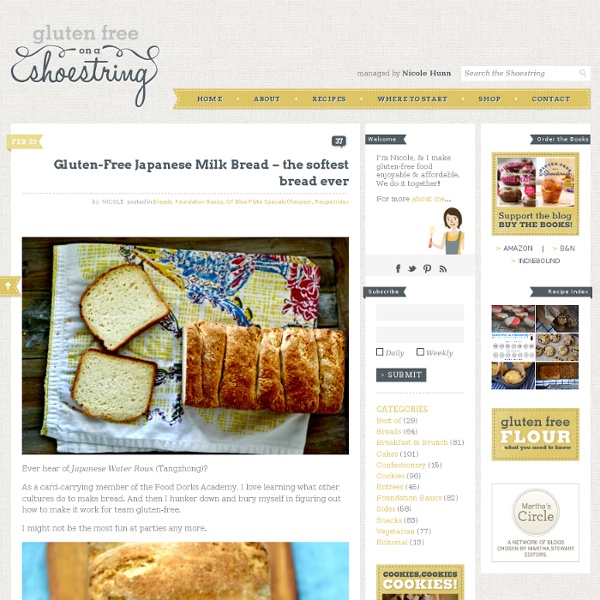 This is about to knock your gluten free socks off: a loaf of super soft gluten free bread that is easy to make, and doesn’t intimidate (I’m here for you!). BOOM! Have you ever heard of Japanese Water Roux (Tangzhong)? As a card-carrying member of the Food Dorks Academy, I love learning what other cultures do to make bread. And then I hunker down and bury myself in figuring out how to make it into gluten free bread for us. I might not be the most fun at parties any more. But if you make this supersoft gluten free bread that stays fresh forever, you might just see that I’m tons of fun in the kitchen. This is what it looks like. To make the water roux, I placed 47 grams (about 1/3 cup) all-purpose gluten-free flour and 1 cup water in a small saucepan and whisked to combine well. Then let it cool. The dough is shaggy. Then roll each piece out into a disk about 1/2 inch thick. Loosely stack the folded pieces of dough in a loaf pan. Softest Gluten-Free Bread: Japanese Milk Bread Prep time:

Gluten-Free Diet Review: Foods You Can Eat and More Why do I need to register or sign in for WebMD to save? We will provide you with a dropdown of all your saved articles when you are registered and signed in. The Promise What if avoiding gluten could change your health? It happened for Elisabeth Hasselbeck, author of The G-Free Diet and a former co-host on The View. The Best Gluten Free Bread: Top 10 Secrets To Baking It RightGluten-Free on a... [pinit] *ETA: I now have a WHOLE BOOK on gluten free bread! It’s called Gluten-Free on a Shoestring Bakes Bread, and it’s filled with full color photos and step-by-steps, and a recipe for every sort of shaped bread and loaf you could ever want! Gluten free bread will NEVER be the same! Soft Gluten Free Sandwich Bread Recipe that's Easy to Make! The words ‘Soft’ and ‘Gluten Free’ are rarely used in the same sentence – and for good reason… Most gluten free baked goods are dry, crumbly and taste like recycled rice cakes. Why for the love of Pete (whoever he is), can we put a man on the moon, but can’t make a gluten free bread that doesn’t require toasting it first so we can eat it without falling apart?! Good news my friends… Soft, Gluten Free Sandwich Bread, Pizza Crusts & Hamburger Buns do exist! It starts with having the right combination of my ‘Erika’s All Purpose Gluten Free Flour Mix‘ paired with the perfect ratio of other ingredients and a careful cooking method. But that doesn’t mean you need to be a rocket scientist to make it… in fact this recipe is so easy, my kids help me with it all of the time and it still turns out great! The special tools featured in this recipe are:

Is Gluten Bad for Your Body? Jamie Chung Chelsea Clinton's wedding got a lot of press play for the gorgeous locale, the esteemed guests, and her beautiful dress. But what also took the cake in terms of media coverage was, well, the cake. The gluten-free cake. Just 10 years ago, barely anyone knew what the word gluten meant, let alone gave any thought to avoiding it. Top 20 Gluten-Free Bread Recipes ... Yes, Really! Bountiful Bread Basket, Part 1: Top 20 Gluten-Free Bread Recipes—Loaves Without a doubt, one of the top requests that I receive is for gluten-free bread recipes. Not just any bread recipes, mind you, but great gluten-free bread recipes. Well, usually the request is more in the form of a plea. And a heartfelt one for sure … “Can you ple-e-e-s-e give me some great gluten-free bread recipes?” You might have even beseeched me for such or pleaded the same to another gluten-free blogger.

11 Gluten-Free Asian Noodles A friend of ours who embarked on a gluten-free diet was heard complaining about wheat-free pastas that are gummy, mushy, and just plain unappetizing. We suggested exploring Asian noodles, instead. Although noodles made from ingredients like acorns, mung beans, and sweet potatoes might not work with your favorite marinara sauce, they do offer wonderful textures and flavors of their own. Their appeal isn't just limited to those on gluten-free diets, either. Going gluten-free just because? Here's what you need to know - Harvard Health Publications After being confined to health-food stores for years, gluten-free foods have become the latest food fad. Supermarket aisles abound with products proudly labeled “Gluten free,” and many restaurants now offer gluten-free options. For people who can’t tolerate gluten, a protein found in wheat, rye, and barley, this abundance is a blessing. But lately it’s become hip to go gluten-free. Based on little or no evidence other than testimonials in the media, people have been switching to gluten-free diets to lose weight, boost energy, treat autism, or generally feel healthier.

Girl with Spoon: Gluten-Free Asian Dumplings Wrappers I love dumplings of all kinds: Chinese potstickers, Japanese gyoza, Polish pierogi. Dumplings have been one of the hardest things for me to give up on my gluten-free diet. Also, unlike gluten-free pasta and pizza, which is easy to find in many supermarkets and even restaurants these days, g-free and allergen-free dumplings and dumpling wrappers are evasive. and some Whole Foods, but the fillings contain soy and sesame, which are verboten for many people with allergies. (I'll include a soy and sesame-free dumpling filling in a later post!) They were excellent starting points and include many great tips on working with the dough, which I'll share with you below. Which Asian Noodles Are Gluten Free – And Which Are Not? 5 Jun I’m sure you have the same problem I have at Asian restaurants: which noodles can I eat and which have wheat? I hate looking at all those lovely noodle dishes on the menu and deciding not to have any, just to be on the safe side. So I’ve compiled a checklist of the most common types of noodles found in Asian restaurants.

Gluten-free diet: What's allowed, what's not A gluten-free diet is a diet that excludes the protein gluten. Gluten is found in grains such as wheat, barley, rye and triticale (a cross between wheat and rye). A gluten-free diet is used to treat celiac disease. Gluten causes inflammation in the small intestines of people with celiac disease. Hortus Natural Cooking – Naturally Italian. Baking basics – Understanding Flo... Here I made a list of various kinds of flours used in baking and pasta making. It is a very approximate summary, and I encourage you to do further research on each kind of flour to better understand their nutritional properties. Still, this list serves as a good sum-it-up to navigate the vast sea of baking ingredients.

Gluten Free Salmon Cakes I live in grocery store heaven. Seriously, no joke. For years Austin has been a mecca of health food stores, thanks to being the headquarters for Whole Foods. But now things are even better with more affordable options like Sprouts, and more recently Trader Joe’s. I almost wet my pants when I found out Trader Joe’s was moving into town. And ever since it opened I have been a regular. Why 80 Percent of People Worldwide Will Soon Stop Eating Wheat The future of wheat is certain, and it’s toxic. There are as many health risks associated with the consumption of wheat as there are nutritional benefits claimed by the wheat industry. Why is there such a strong emphasis on the development of wheat products all over the world when there are so many adverse and crippling effects such as neurological impairment, dementia, heart disease, cataracts, diabetes, arthritis and visceral fat accumulation, not to mention the full range of intolerances and bloating now experienced by millions of people? Approximately 700 million tons of wheat are now cultivated worldwide making it the second most-produced grain after maize. It is grown on more land area than any other commercial crop and is considered a staple food for humans.