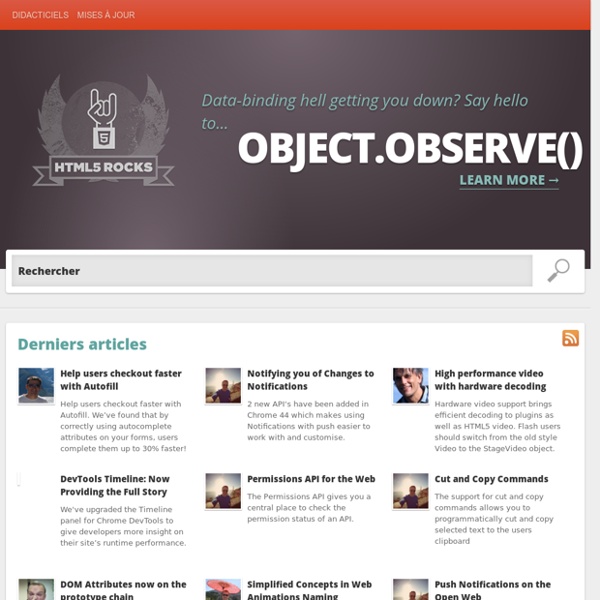 HTML5 Studio ⧉ Info Drag n Drop Photos Drag files in from your machine, get an instant preview HTML5 Drag 'n Drop FileReader API Your browser appears to support these features. View SourceDownload Sample Blowing up HTML5 video and mapping it into 3D space « Craftymind I’ve been doing a bit of experimenting with the Canvas and Video tags in HTML5 lately, and found some cool features hiding in plain sight. One of those is the Canvas.drawImage() api call. Here is the description on the draft site. 3.10 Images To draw images onto the canvas, the drawImage CSS Font-Size: em vs. px vs. pt vs. percent One of the most confusing aspects of CSS styling is the application of the font-size attribute for text scaling. In CSS, you’re given four different units by which you can measure the size of text as it’s displayed in the web browser. Which of these four units is best suited for the web? It’s a question that’s spawned a diverse variety of debate and criticism. Finding a definitive answer can be difficult, most likely because the question, itself, is so difficult to answer.

Google's Guide To Designing With Empathy With a price tag that's already set records by being $1.6 billion over-budget, mass outbreaks of the Zika virus, and water-sport venues that are allegedly teeming with human excrement, the Rio 2016 Olympic Games are already looking like the biggest planning disaster in IOC history—and this, just two years after Sochi. But it's not all bad. As part of the $12 billion budget attached to the Olympic Games, Rio has built 11 new sports facilities, ranging from a whitewater water park and a bitchin' BMX stadium to a massive new tennis center and a trio of multi-use sports arenas. And unlike past Olympic games, most of these structures will be permanently integrated into Rio's urban fabric, giving Brazilian athletes, students, and the general public places to swim and play for years to come. Ahead of today's torch-lighting ceremony, here are the 11 new stadiums, parks, and venues you'll be getting to know over the course of this year's Summer Olympic and Paralympic games.

Why Cloud Computing is the Future of Mobile The term "cloud computing" is being bandied about a lot these days, mainly in the context of the "future of the web." But cloud computing's potential doesn't begin and end with the personal computer's transformation into a thin client - the mobile platform is going to be heavily impacted by this technology as well. At least that's the analysis being put forth by ABI Research. Their recent report, Mobile Cloud Computing, theorizes that the cloud will soon become a disruptive force in the mobile world, eventually becoming the dominant way in which mobile applications operate. You may be wondering: what does the term "mobile cloud computing" really mean? Basically, it refers to an infrastructure where both the data storage and the data processing happen outside of the mobile device.

Top 10 Things to Know about TypeScript Introduction TypeScript is a superset of JavaScript that provides typed nature to your code. TypeScript can be used for cross-browser development and is an open source project.