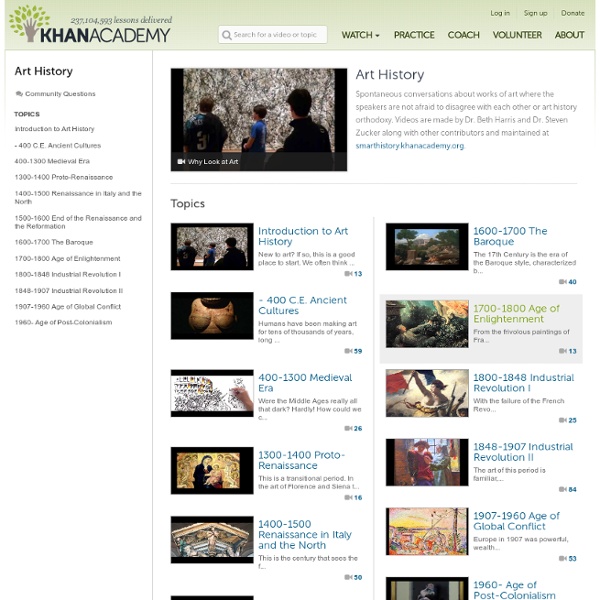 Ancient Architecture of the World - The History of Architecture Ancient ArchitectureThe Art History Archive - Architecture This Website is Best Viewed Using Firefox By Charles Moffat - December 2007. Even at an early stage mankind strove to build higher and higher. Some of our most impressive structures are actually incredibly old and difficult to determine the precise dates they were built. We still don't have a clue how the Great Pyramid of Giza was built, or its precise purpose. As is the technology used and the matter of how multiple cultures in Africa, the Middle East and Central America all built pyramids around roughly the same time. Why do we aspire to such grand heights? In some cases we might not have much choice but to build upwards if the population grows very dense and land close to water and food is scarce. We thrive in some of the most inhospitable places on the Earth, and always we build upwards. There is no precise beginning for the history of architecture either. Likewise, there was no precise ending of the ice age. Ancient Africa

Understanding Formal Analysis The elements of art are components or parts of a work of art that can be isolated and defined. They are the building blocks used to create a work of art. The list below describes each element of art. Learn about the principles of design here. Download a student handout containing a list of the elements of art and their definitions. Line A line is an identifiable path created by a point moving in space. Horizontal lines suggest a feeling of rest or repose because objects parallel to the earth are at rest. Vertical lines often communicate a sense of height because they are perpendicular to the earth, extending upwards toward the sky. Horizontal and vertical lines used in combination communicate stability and solidity. Diagonal lines convey a feeling of movement. The curve of a line can convey energy. Shape and form Shape and form define objects in space. Shape has only height and width. Form has depth as well as width and height. Space Real space is three-dimensional. Color Texture

Western Philosophy Tiki Taane | Sofia Minson Oil Painting | New Zealand Artwork Original painting Sold, 850 x 1800mm, oil on canvas, 2011 Limited edition print available - scroll down and click 'add to cart' This work is part of an ongoing series of contemporary Maori portraits, in which Sofia shines a light on creative and inspiring Maori people who are helping to evolve today's culture through their art or roles society. This oil portrait of New Zealand musician Tiki Taane with painted face moko brings clearly to view the connection he forges between himself and his whakapapa. Minson explains how she and the chart-topping musician came to know each other: "We were in the same issue of Mana Magazine a few years ago and Tiki emailed me to say that he liked my art and that we should think of a way to collaborate together in the future, perhaps through album artwork or merchandise for his music. Minson's mixed Maori (Ngati Porou), Swedish, English and Irish ancestry has sparked her interest in how we relate to the culture of our ancestors in a contemporary world. 1. 2.

Home Intro : Imagination: Creating the Future of Education & Work The creative adult is the child who has survived - Ursula Le Guin RSA Animate – Changing Education Paradigms In February 2011, every teacher in Providence, Rhode Island was pink slipped. Not all 1,926 of them will get fired, of course, but with the district facing a $40 million deficit, anything is possible. “This is beyond insane,” Providence Teachers Union President Steve Smith told the Providence Journal. Every school district in the United States faces its own version of what’s happening in Providence. Americans are currently faced with a shortage of jobs, but by 2018 the nation will be faced with a shortage of educated workers. Can that be prevented, and if so, how? Since 2007, the directors of this project have been collaborating on the development of imagination as the driving force behind this shift. Imagination is required to envision the skills demanded by the future as the rate of transformation continues to increase. Yes. This project is dedicated to Dr. Follow Rita J.