Jean-Baptiste Michel: The mathematics of history 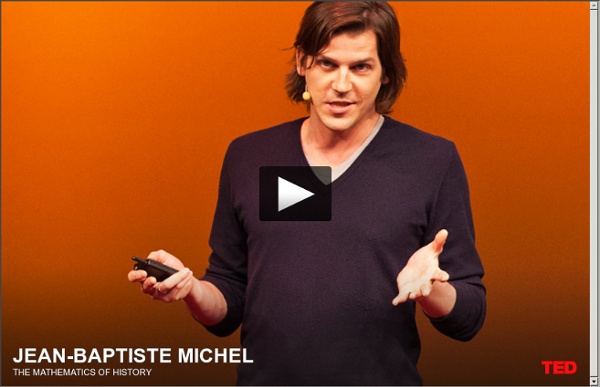 anthropologist: When Same-Sex Marriage Was a Christian Rite Contrary to myth, Christianity's concept of marriage has not been set in stone since the days of Christ, but has constantly evolved as a concept and ritual. Prof. John Boswell, the late Chairman of Yale University’s history department, discovered that in addition to heterosexual marriage ceremonies in ancient Christian church liturgical documents, there were also ceremonies called the "Office of Same-Sex Union" (10th and 11th century), and the "Order for Uniting Two Men" (11th and 12th century). These church rites had all the symbols of a heterosexual marriage: the whole community gathered in a church, a blessing of the couple before the altar was conducted with their right hands joined, holy vows were exchanged, a priest officiatied in the taking of the Eucharist and a wedding feast for the guests was celebrated afterwards. Original Article or A Kiev art museum contains a curious icon from St. Is the icon suggesting that a gay "wedding" is being sanctified by Christ himself? Prof.

Conspiracy theorists claim Newtown school shooting a hoax WASHINGTON The United States has long been a breeding ground for conspiracy theorists, spurred by an often violent history riddled, in particular, with shadowy political assassinations. But the latest conspiracy movement seems custom-made to underscore the need for a national debate on mental illness. Some of the Sandy Hook truthers, as they’ve been dubbed, believe last month’s school shooting in Newtown, Conn., was a hoax. The Obama administration perpetrated the hoax, the conspiracy theorists claim, in order to ratchet up support for tougher gun control measures. They call themselves Operation Terror, and many of the movement’s adherents appear to have ties to the so-called 9/11 truthers who have long held that the terrorist attacks of Sept. 11, 2001, were an inside job by the George W. Their theories on the Dec. 14 shooting in Sandy Hook appear to lack any basis in fact, reality or common sense. In fact, it’s the dead girl’s little sister. Police are investigating the harassment.

Visualising China: explore historical photos of China The Greatest Speeches In Modern History I Am Prepared To Die, Nelson Mandela One of the most memorable speeches in modern history comes from Nelson Mandela, the man who fought tirelessly against South African apartheid. His revolutionary work, however, had him wrongfully arrested in 1962 on charges of treason and for inciting the public to strike against the government. Mandela was sentenced to life in prison but delivered this great speech during his trial. One-liner: “I have cherished the ideal of a democratic and free society in which all persons live together in harmony and with equal opportunities. Greatest Modern History Speeches: Quit India, Mahatma Gandhi Suppressed under British rule for almost a century, the Quit India movement and Mahatma Gandhi’s subsequent speech prompted the Indian people to fight for their freedom. “In the democracy which I have envisaged, a democracy established by non-violence, there will be equal freedom for all.

Hiroshima: Was It Absolutely Necessary? By Doug Long This article is copyright Doug Long. No duplication by any means without express permission of the author. Mr. (Sources for abbreviations are listed at the end of the article). 50 years ago nuclear weapons were exploded upon the people of Hiroshima and Nagasaki in Japan. For some who are accustomed to the popular beliefs about this matter, this study may be discomforting, although that is not its intent. The Tide Turns As the war with Germany drew closer to the end, the Allies waged an increasingly effective war against Japan. The Marianas had been a key area within Japan's defense perimeter; now Japan would be within range of bombing runs from Pacific Ocean locations that were superior to the China bases that had been used for bombing missions (Akira Iriye, Power and Culture: The Japanese-American War, 1941-1945, pg. 174; Michael Sherry, The Rise of American Air Power, pg. 176). Although fighting fanatically, Japan had lost a string of high-casualty battles (U.S. No Surrender

A glimpse of teenage life in ancient Rome - Ray Laurence What Thomas Kuhn Really Thought about Scientific “Truth” | Cross-Check In 1991, when I was a staff writer for Scientific American, I wrote a letter to Thomas Kuhn, then at MIT. I said I wanted to profile him for Scientific American and “tell readers how you developed your views of the process of science.” When he didn’t respond, I called. Kuhn was reluctant to do the interview. He distrusted journalists, and he was still peeved by an old Scientific American review of his 1962 book The Structure of Scientific Revolutions. I finally wore Kuhn down, and in February 1991 I interviewed him for more than three hours in his cluttered office. To commemorate the 50th anniversary of Structure, I’m posting an edited version of my write-up of Kuhn in The End of Science (Addison Wesley, 1996), which draws heavily on my meeting with him. The Structure of Thomas Kuhn “Look,” Thomas Kuhn said. “The book” was The Structure of Scientific Revolutions, which may be the most influential treatise ever written on how science does (or does not) proceed. Photo credit: Frieze.com

Edward Steers Jr.: 6 Biggest Hoaxes In History Napoleon Bonaparte once famously observed "history is a set of lies agreed upon." For those who look for the truth, it is often far too easy to believe in fraudulent history and science when they tell us what we want to hear. These six hoaxes demonstrate two major factors involved in the success of a hoax or forgery--greed and the desire to believe. It is important to tackle history's enduring questions, examining the evidence behind each and dispelling lingering myths in order to explore the interplay of history and science to uncover how facts and falsehoods vie for belief. There are two kinds of myths that one finds in history: those that arise spontaneously, and those that are manufactured. The line between these two is extremely fine and can often become confused. The success of these frauds and so many alike highlights the disturbing fact that if true history fails to entertain the public, it is likely to be ignored or forgotten. Close Not All Facts lead to the Right Conclusion

Home | AC History Units AC History Units presents 8 units developed by the History Teachers' Association of Australia to support teachers in the implementation of the Australian Curriculum: History The development of these units has been guided by a number of ideas: Unit 1, Teaching History, is a foundation unit, providing a brief introduction to the discipline of history. It 'unpacks' the skills and concepts, surveys approaches to teaching and provides an essential framework for the other units. Units 2-8 focus on topics relevant to particular year levels and are designed to provide very practical support in the form of teaching programs, sample 'learning sequences', a wide range of resources and assessment ideas. A learning sequence is a sequence of lessons (as opposed to separate learning activities) designed to give students an opportunity to develop skills and understanding in some depth.

What Vikings really looked like The fine decoration of the Oseberg ship in Norway, which was buried in the year 834, provides clues to what Vikings looked like. Inside the ship were two women and the archaeologists believe the ship has served as a sarcophagus. (Photo: Annie Dalbéra) There’s no shortage of myths about the appearance of our notorious Viking ancestors. To find out more about these myths, ScienceNordic’s Danish partner site, videnskab.dk, asked its Facebook readers to list their favourite myths about what the Vikings looked like. We have picked out five myths from the resulting debate and asked researchers to help us confirm or bust these myths. Armed with this information, our graphic designer then took a shot at drawing some examples of our infamous forefathers, which you can see in our picture gallery. The five myths are: MYTH 1: Vikings were dirty and unkempt Unwashed, rough warriors with froth hanging out of the corners of the mouth. But that’s unlikely to be true: It wasn’t enough just to be clean.

Andrew Bacevich: Naming Our Nameless War How Many Years Will It Be? Cross-posted with TomDispatch.com For well over a decade now the United States has been “a nation at war.” Does that war have a name? It did at the outset. After 9/11, George W. Upon succeeding to the presidency in 2009, however, Barack Obama without fanfare junked Bush’s formulation (as he did again in a speech at the National Defense University last week). Does it matter that ours has become and remains a nameless war? Names bestow meaning. With rare exceptions, Americans today characterize the horrendous fraternal bloodletting of 1861-1865 as the Civil War . Schoolbooks tell us that the Spanish-American War began in April 1898 and ended in August of that same year. Yet the Cubans were not exactly bystanders in that drama. Strange as it may seem, Europeans once referred to the calamitous events of 1914-1918 as the Great War . In September 1939 -- presto chango ! Does World War II accurately capture the events it purports to encompass? Andrew J.

History in The Making Journal Chain Letter Evolution Letter from Heaven (top), 1795. Above title. Send-a-Dime money chain letter, 1935. Lead to section 4.1. Acknowledgments I could not have conducted this study without the assistance and friendship of Dr. Special thanks also go to Alan E. I have received much needed help with foreign language chain letters. Though I am solely responsible for the approach and presentation here, this effort was sustained because a few people expressed interest. A list of those who provided one or more paper chain letters appears on the information page for the archive. 1-1 Introduction. Seeking paper chain letters. Overview. Using a collection of 750 dated paper chain letters, I have identified types and variations that appear and disappear over the years. Subtle methods that increase replication include: The use of ambiguity and obfuscation to deal with such questions as: Does simply passing on the received letter avoid bad luck? Auxiliary Files and Conventions. Religion. Charity. Luck.

Epistemology of History undefined It would probably be remiss of me to not mention my views about the epistemology of historical truth, and my views about history in general. So, I state my views in brief here. I do not believe that history can always be fully reconstructed. What happened in the past often left different impressions on different people, both contemporaneous and of succeeding generations. Up to history of Bengal