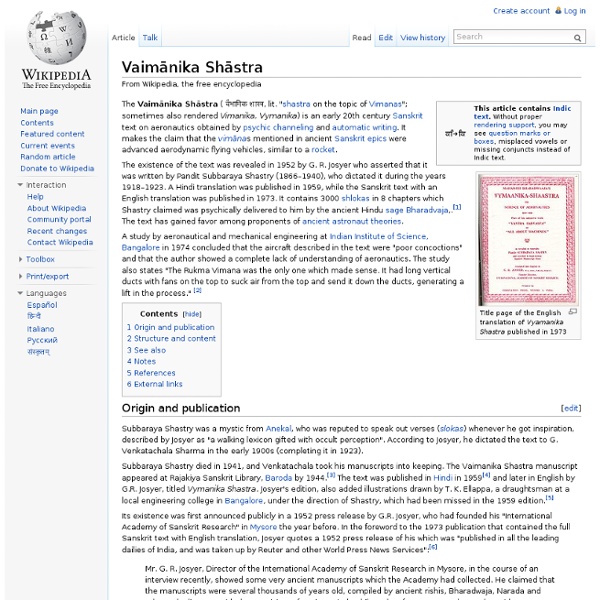 Title page of the English translation of Vyamanika Shastra published in 1973 The Vaimānika Shāstra ( वैमानिक शास्त्र, lit. "shastra on the topic of Vimanas"; sometimes also rendered Vimanika, Vymanika) is an early 20th-century Sanskrit text on aerospace technology obtained by psychic channeling and automatic writing. It makes the claim that the vimānas mentioned in ancient Sanskrit epics were advanced aerodynamic flying vehicles, similar to a rocket. The existence of the text was revealed in 1952 by G. R. A study by aeronautical and mechanical engineering at the Indian Institute of Science, Bangalore in 1974 concluded that the aircraft described in the text were "poor concoctions" and that the author showed a complete lack of understanding of aeronautics. Origin and publication[edit] Subbaraya Shastry was a mystic from Anekal, who was reputed to speak out verses (slokas) whenever he got inspiration, described by Josyer as "a walking lexicon gifted with occult perception". Mr. J.

10 monster traffic jams from around the world 30 September 2012Last updated at 19:15 ET The story of traffic problems in Brazil's biggest city, Sao Paulo, which suffers jams of up to 180km at some points in the week, brought a worldwide response from readers. Here are 10 of their gridlock stories - plus one that's traffic-free. Bangkok's traffic problem has been getting worse since the government introduced a policy to refund tax for first-time car buyers. Coupled with the Thai aspiration to own a car and get some status, this policy has resulted in five million vehicles in a city which can only cope with less than two million cars. Once I got into a jam in downtown Bangkok, when I spent almost two hours moving less than a kilometre. Two or three weeks ago, travelling from Pathum Thani to central Bangkok, it took four and a half hours for a journey which usually takes less than an hour. Indonesians living in Jakarta have their own word for traffic jam - the inevitable "macet". Continue reading the main story Allan Bell's commute

Valdivia culture The Valdivia Culture is one of the oldest settled cultures recorded in the Americas. It emerged from the earlier Las Vegas culture and thrived on the Santa Elena peninsula near the modern-day town of Valdivia, Ecuador between 3500 BC and 1800 BC. map of Valdivia Culture Valdivian pottery is the oldest in America. Valdivian pottery in the Museo de La Plata (Argentina). Mortar, Jaguar Valdivia, South Coast ( 4000 to 1500 B.C). Mortar, Parrot Valdivia, South Coast (4000 a 1500 BC). The Valdivia culture was discovered in 1956 by the Ecuadorian archeologist Emilio Estrada. Recently, geneticists have published evidence from haplogroup studies that support the theory of Japanese-Valdivian contact.[1] Valdivian pottery initially was rough and practical, but it became splendid, delicate and large over time. There is a display of Valdivian artifacts in Guayaquil, Ecuador at UEES. References[edit] External links[edit] Ecuadorian Archaeology External links[edit]

Robinson Crusoe: Life on the real island 1 October 2012Last updated at 18:46 ET By Gideon Long BBC News, Santiago Gideon Long explores the island that inspired Defoe's famous novel Daniel Defoe's famous novel was inspired by the true story of an 18th Century castaway, but the real Robinson Crusoe island bears little resemblance to its fictional counterpart. Think of the island on which Robinson Crusoe is shipwrecked in Daniel Defoe's famous book and you're likely to think of a sun-drenched Caribbean idyll with sandy beaches and palm trees. But the island that supposedly inspired the book is nothing like that. Robinson Crusoe Island is the largest of the Juan Fernandez Islands, a tiny archipelago that is now Chilean territory. The ship was leaking badly and its crew was sick and exhausted. Continue reading the main story Gone native Alexander Selkirk (depicted above), spent more than four years on the Juan Fernandez islands after a dispute with the captain of the ship on which he was serving. What happened next is unclear.

Uxmal Uxmal (Yucatec Maya: Óoxmáal [óˑʃmáˑl]) is an ancient Maya city of the classical period in present-day Mexico. It is considered one of the most important archaeological sites of Maya culture, along with Chichen Itza in Mexico; Caracol and Xunantunich in Belize, and Tikal in Guatemala. It is located in the Puuc region and is considered one of the Maya cities most representative of the region's dominant architectural style. It is located 62 km south of Mérida, capital of Yucatán state in Mexico. Its buildings are typical of the Puuc style, with smooth low walls that open on ornate friezes based on representations of typical Maya huts. The buildings take advantage of the terrain to gain height and acquire important volumes, including the Pyramid of the Magician, with five levels, and the Governor's Palace, which covers an area of more than 1,200 m2 (12,917 sq ft). Toponymy[edit] The present name seems to derive from Oxmal, meaning "three times built". Ancient history[edit] Sylvanus G.

Oregon farmer eaten by his pigs 2 October 2012Last updated at 10:52 ET Pigs are omnivorous Authorities are investigating how a farmer in the US state of Oregon was devoured by his pigs. Terry Vance Garner, 69, went to feed his animals last Wednesday on his farm by the coast, but never returned. His dentures and pieces of his body were found by a family member in the pig enclosure, but the rest of his remains had been consumed. The Coos County district attorney's office said that one of the animals had previously bitten Garner. The animals are estimated by the authorities to each weigh about 700lb (320kg). 'Good-hearted guy' Investigators say it is possible that the hogs knocked Garner over before killing and eating him. But they have not ruled out the possibility that the farmer could have collapsed from a medical emergency, such as a heart attack. A pathologist was unable to determine the cause of Garner's death and his remains have been sent to the University of Oregon to be analysed by a forensic anthropologist.

Varuna In the Vedas[edit] Varuna and Mitra are the gods of the societal affairs including the oath, and are often twinned Mitra-Varuna (a dvandva compound). Varuna is also twinned with Indra in the Rigveda, as Indra-Varuna (when both cooperate at New Year in re-establishing order [1]). The Rigveda and Atharvaveda[2] portrays Varuna as omniscient, catching liars in his snares. Similarities with other gods[edit] In the Ramayana[edit] Faced with the dilemma of how to cross the ocean to Lanka, where his abducted wife Sita is held captive by the demon king Ravana, Rama (an Avatar of Vishnu) performs a penance (tapasya) to Varuna, the Lord of Oceans, fasting and meditating in perfect dhyana for three days and three nights. In Contemporary Hinduism[edit] Worship of Varuna is an integral part of the evening ritual of the Sandhyavandanam, of a dvija Hindu. In Zoroastrianism[edit] "Varun" is one of 101 names of Ahura Mazda, meaning "Deliverer from evil". Varuna is not attested in the texts of the Avesta.

Researchers grow teeth from gum cells 8 March 2013Last updated at 20:12 ET Researchers combined cells from human gums and cells from mice to create the new teeth Dentists may one day be able to replace missing teeth with ones newly grown from gum cells, say UK researchers. The team from King's College London took cells from adult human gum tissue and combined them with another type of cell from mice to grow a tooth. They say using a readily available source of cells pushes the technology a step nearer to being available to patients. But it is still likely to be many years before dentists can use the method. Other work has focused on using embryonic stem cells to create "bioteeth". It proved it could be done but is expensive and impractical for use in the clinic, the researchers said. In the latest study they took human epithelial cells from the gums of human patients, grew more of them in the lab and mixed them with mesenchyme cells from mice. Next steps An example of the hybrid human/mouse biotooth grown by researchers

Vengeful ghost The spirit of the vengeful priest Raigo returns as a plague of rats and destroys the Mii Temple. Tsukioka Yoshitoshi 1891 As a husband passes by the place where his pregnant wife was brutally murdered, her ghost appears and hands their child to him. She then tells him the story of her murder and assists him as he takes revenge for her death. Utagawa Kuniyoshi 1845 In mythology and folklore, a vengeful ghost or vengeful spirit is said to be the spirit of a deceased person who returns from the afterlife to seek revenge for a cruel, unnatural or unjust death. Cultural background[edit] The concept of a vengeful ghost goes back to ancient times and is part of many cultures. Exorcisms and appeasement are among the religious and social customs practiced by various cultures in relation to the vengeful ghost. List of vengeful ghosts[edit] Ancient Rome[edit] Ancient Greece[edit] British Isles[edit] China[edit] Indian Subcontinent[edit] Japan[edit] Onryō. Latin America[edit] North America[edit] Chindi.

Future - Health - A stroke of insight Synopsis Jill Bolte Taylor got a research opportunity few brain scientists would wish for: she had a massive stroke, and watched as her brain functions - motion, speech, self-awareness - shut down one by one. An astonishing story. Talk recorded 27 February 2008. About the Speaker Brain researcher Jill Bolte Taylor studied her own stroke as it happened -- and has become a powerful voice for brain recovery. Amazed to find herself alive, Taylor spent eight years recovering her ability to think, walk and talk. Ventarron Researchers named the temple structure Ventarrón. Located in a valley, the complex, covers about 2500 square meters (27,000 square feet).[2] The temple and murals were radio carbon dated to 2000 B.C., and are thought to be the oldest discovered in the Americas. One mural on two walls depicts a deer caught in a net; another has an abstract design in red and white.[3] The temple was constructed of bricks of river sediment rather than the stone or adobe later to be traditional in the area; its construction is unique for the northern coast. It contains a stairway leading to a fire altar. Walter Alva, the Peruvian archaeologist making the discovery, commented on the findings: "What's surprising are the construction methods, the architectural design and most of all the existence of murals that could be the oldest in the Americas. Alva and his team worked three months on the excavation. Coordinates:

From child bride to multi-millionaire in India 25 May 2012Last updated at 00:50 GMT Kalpana Saroj heads Kamani Tubes, a company worth more than $100m An Indian Dalit (formerly untouchable) woman, who once attempted suicide to escape discrimination, poverty and physical abuse, becomes the CEO of a multi-million dollar company. The BBC's Rajini Vaidyanathan in Mumbai captures Kalpana Saroj's journey - a symbol of the Dalit struggle to mark their arrival at the top. Her life reads like the plot of a Bollywood film, with a narrative which has defied so many obstacles, to conclude with a happy ending. The "rags to riches" cliche can be overused, but it goes some way in describing the story of Kalpana Saroj, a woman who struggled on so many occasions on her way to the top. Born into a low-caste Dalit family, she was bullied at school, forced into marriage at the age of 12, fought social pressures to leave her husband, before she tried to take her own life. Today, she is a multi-millionaire. Continue reading the main story “Start Quote