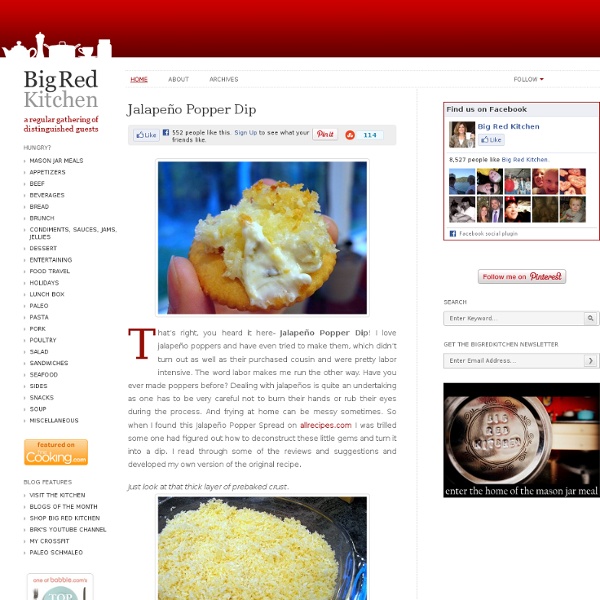 That’s right, you heard it here- Jalapeño Popper Dip! I love jalapeño poppers and have even tried to make them, which didn’t turn out as well as their purchased cousin and were pretty labor intensive. The word labor makes me run the other way. Have you ever made poppers before? Dealing with jalapeños is quite an undertaking as one has to be very careful not to burn their hands or rub their eyes during the process. Just look at that thick layer of prebaked crust. I took this appetizer to a neighborhood gathering last Saturday and everyone really liked it- a lot. Look at that beautiful golden crust atop a bubbly creamy and flavorful base. Jalapeño Popper Dip2- 8 ounce packages cream cheese, room temp1 cup mayonnaise1 cup shredded Mexican blend cheese1/2 cup Parmesan cheese1- 4 ounce can chopped green chilies1- 4 ounce can sliced jalapeños- double if you like heat 1 cup panko bread crumbs1/2 cup Parmesan cheese1/2 stick butter, melted For other delicious dips and spreads:

Secret Recipes and Hummus We all have our secret recipes. Recipes that we are proud of, that we offer to bring to get togethers, and that everyone adores and coos over. After the party is over the bowl has been scraped clean and everyone is asking - nay begging- for your recipe. Naturally you are flattered that everyone has loved it so much to not only finish it all but to beg for the recipe, and you begin sharing the recipe with everyone. Except when it is a secret recipe. Thousands of dollars funding my education in political science has helped me self-diagnose myself as a 'realist' who believes in 'zero-sum gain', as in they feel like only one person can win while everyone else loses. So, I have concluded that I am probably insane, and like most insane people I need to rehabilitate back into normal society. Especially since it seems that when I share my secret recipes everyone else seems to love them as much as I do! Today I am sharing with you my 'secret' but now not so secret hummus recipe. Directions: 1.

what goes into making chocolate bowls Leave it up to me to mess up every recipe in the world... but on the flipside, by experiencing everything that goes wrong, I end up learning the most.I had seen these bowls from Stephanie's Kitchen, and decided it was a fantastic idea for my food independent study. ingredients: chocolate, and balloons! first, a giant bar of chocolate all the way from taiwan! (i actually tried to pipe pretty lacy chocolate bowls first, but uh, that completely failed so i moved on. plus i don't like that pink fake chocolate.) balloons! tip number 2, after you have melted your chocolate in a double broiler and poured it into a bowl for dipping, let it cool before you dip your balloons. because although you are really excited to dip them and set them down like this... five seconds later you shall hear a POP and you (as well as your kitchen) will be covered in chocolate because apparently latex doesn't like heat. edit: thanks to a lovely comment, there is a reason that makes more sense!

French Fries: The No-Guilt Version There’s nothing like a french fried potato. The taste, the texture, the dip-ability; it’s probably one of my favorite go-to comfort foods. However, I don’t need the fat of an actual deep fried potato, and I certainly do not favor processed french fries that come from the frozen food section of the grocery store. Enter: Healthy French Fries* Step 1: Peel your ‘taters. Step 2: Cut them into strips. Step 3: Place potatoes in colander and rinse the starch off of them. Step 4: Pat down the potatoes. Step 5: Drizzle Olive Oil over potatoes. Step 6: Salt those babies up. Step 7: Mix them up so they all get coated with the olive oil and salt. Step 8: Arrange them, on a baking sheet, in a single layer Step 9: Add anything else you like. Step 10: Place the potatoes into your preheated oven for 20 minutes. Step 11: Flip and continue to bake for 5-10 minutes. And then, voila… Healthy French Fries *I usually do the same thing with sweet potatoes. Enjoy!

Spanakopita Bites Buttery, flaky phyllo appetizers are especially popular in my family. I guess I can't blame them since who can resist buttery, flaky phyllo dough anyway?! My mother in law requested these Spanakopita Bites as an appetizer for the birthday party she was throwing for her husband. They were a hit with no leftovers, which is no surprise. I firmly believe that anything paired with butter and phyllo dough would be hard to resist...right? These spanakopita bites are a twist on the classic spanakopita recipe I tend to make. Spanakopita Bites recipe adapted from CBSrecipe yields 60-72 mini muffin sized bites 1 Tablespoon vegetable oil 1 small onion, chopped 3 green onions, chopped 10 ounces frozen chopped spinach. thawed and squeezed dry 4 to 6 ounces domestic feta cheese, crumbled 1 cup cottage cheese OR ricotta cheese OR cream cheese 1 egg Salt and pepper to taste 1 pound phyllo, thawed 8 tablespoons butter (1 stick), melted 2 tablespoons vegetable oil Preheat oven to 375 degrees

Homemade Oreos I almost never repeat recipes. I have soooo many recipes bookmarked and dog eared that it just doesn't make sense to bake the same thing twice. This recipe is the exception. These cookies are the most demanded item that I bake. As a matter of fact you probably won't even believe me if I tell you who requested these cookies. I first saw these cookies on Smitten Kitchen (one of my absolute favorite blogs, ever!) The filling is a dead ringer for the oreo filling. These will definitely impress anyone you make them for.

Garlic Butter Rolls › shutterbean For those of you who swoon over garlic twisty bread but can’t bring yourself to order whole pizza to make the delivery worthwhile, this one’s for you! They are scrumptious! Dip some in marinara or serve them with a salad and pasta! You could also eat them alone, directly from your kitchen counter. No one will know. To push them over the edge of deliciousness, I am going to tuck a little bit of Parmesan cheese in the middle of each roll before I form them into little dough balls next time! I used Trader Joe’s plain pizza dough for this batch! Start by mincing 4 cloves of garlic. While your dough is getting to room temp, get your muffin tin ready and put some oil in a little bowl. Cut the dough into 12 pieces. Put a pinch of garlic on top. Brush the tops with olive oil and place in the oven for 15-18 mins. Here’s what they look like after 17 minutes in my oven. Dip them in a bowl of melted butter and parsley. You have yourself a very delicious little garlic knot/roll. Makes 12

Saturdays with Rachael Ray - Pack-It-In Pizza Heros | I am a slacker. My taxes still aren’t filed. I had planned on working on 4 new recipes yesterday, cleaning all of my bathrooms, and hoped to get a grasp on my overflowing email inbox. And then I noticed the date. So instead of all of the things on my list that I needed to get done, I worked on taxes. And when the day was coming to a close, all I wanted was a simple dinner. I’ve been hitting the recipe jackpot lately – at least according to my husband. What is your favorite go-to meal when you’ve had a crazy day? Change up pizza night by turning your pizza into a sandwich!! Ingredients 1 pound pizza dough, quartered 1/4 cup extra virgin olive oil, plus more for brushing 1 pound crimini mushrooms, sliced salt and pepper 8 oz thinly sliced pepperoni 8 oz mozzarella, shredded 8 slices swiss cheese marinara sauce, for serving Instructions Lightly flour a work surface. Recipe from www.tasteandtellblog.com

Homemade Peanut Butter Cups I’ve always wanted to make my own chocolate and peanut butter cups. The recipes are so easy, I’m not sure why I’ve never gotten around to it until now. They really took no time at all, in nearly 30 minutes I was already sinking my teeth into these oh-so-rich peanut butter cups. I looked at a few recipes and skipped on most of them. Some of them used shortening, or called for ingredients I didn’t have. I used the recipe from Have Cake, Will Travel; they looked like the perfect ones. My notes: I took the advice from Have Cake, Will Travel and added 2 tablespoons of peanut butter to the melted chocolate; I did not add extra salt; I melted the chocolate in a heavy-bottom saucepan rather than the microwave; I used regular sized cupcake liners, not minis, so mine are closer to Reese’s Peanut Butter Cups size; I used the freezer instead of the refrigerator to set up the chocolate on the bottom. They are so delicious. Homemade Chocolate Peanut Butter CupsAdapted from Have Cake, Will TravelMakes 12

Pepperoni Pizza Monkey Bread Recipe Kids can be frustratingly picky eaters. They can also have highly entertaining quirks. My niece used to ask for pepperoni pizza and then proceed to discard all of the pepperoni. But don’t you dare suggest that she order plain cheese pizza! Un-Pepperoni Pizza. But when you wrap pepperoni pizza into a fun, savory, pull-apart style bread, it’s no longer “icky” pepperoni pizza. I’ve had these Pizza Bites bookmarked for ages, so when I finally found an excuse to make them, I wanted to take it in a slightly different direction: a savory monkey bread. A very light coating of garlicky butter-covered pepperoni pizza bites, piled into a bundt cake pan, makes for a very fun Pepperoni Pizza. Or Pepperoni Un-Pizza. You can take the long route and make your favorite pizza dough and marinara sauce, or the short route and pick up your favorite pizza dough and red sauce from the store. Ingredients Instructions Heat garlic and butter over medium heat just until the garlic begins to brown. Notes