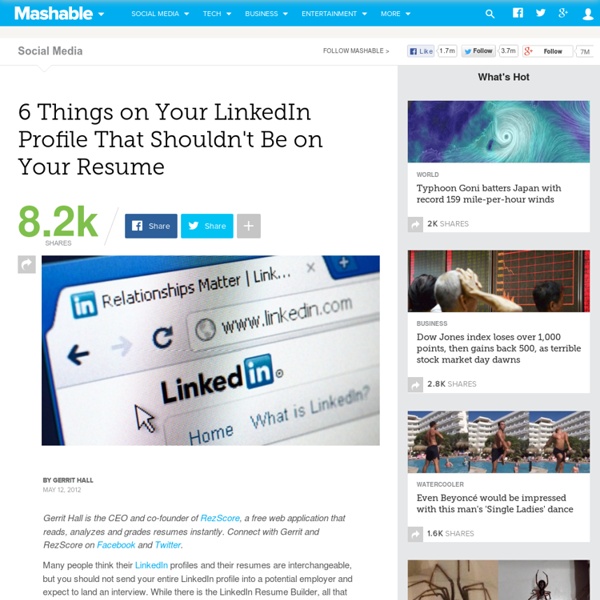 Gerrit Hall is the CEO and co-founder of RezScore, a free web application that reads, analyzes and grades resumes instantly. Connect with Gerrit and RezScore on Facebook and Twitter. Many people think their LinkedIn profiles and their resumes are interchangeable, but you should not send your entire LinkedIn profile into a potential employer and expect to land an interview. Sure, LinkedIn and your resume have a lot in common. 1. That job you held in high school is likely not applicable to your career path five years post-graduation, so don’t include it on your resume. For example, if you were applying for a job in social media, you’d want to include your internship at a local news station where you helped create a Facebook Page for the company. 2. It’s true that a potential employer might want to see your work portfolio or samples, but including links to everything you’ve ever written on your resume is unnecessary. 3. 4. 5. 6. Your personal life is your personal life. Sr.

Lessons Learned in Dakar Two weeks ago, I was getting on a plane to Dakar, Senegal and a week after that, I was helping to launch the first conference on Child Protection Systems Strengthening in Sub-Saharan Africa. In that short time frame, I have learned an amazing amount about child protection and the unique issues its pioneers strive to overcome; the challenges of bringing new technologies to sub-Saharan Africa; the power of technology for global communication; and even a bit about the city of Dakar. Working out of the UNICEF office in the days leading up to the conference. Before I delve into some of the amazing experiences I had in Dakar, I’ll give you a little more background about what I was doing there in the first place. Working as a Technology and Education Consultant for Wellspring Advisors, LLC, I have been designing a social media campaign and building a wikispace to house the discussions and documents related to this conference over the past few months. Like this: Like Loading... Related

Huntsy: A Dashboard for Your Job Search Ask any job seeker, and he'll tell you that looking for a job is, in and of itself, a job. It's time-consuming to prep your cover letter, tweak your resume, follow up and plan your interview, especially when you're applying for multiple positions. Sure, you could make an intense, color-coded spreadsheet — but most of us aren't that Type A. That's where Huntsy comes in — it's like HootSuite for your job search. Huntsy's dashboard offer's a bird's eye view (hence the owl logo) of your job hunt, offering a bird's-eye view of your professional prospects. "People are applying to many different places — Huntsy is our way to make it easy for them," says Cezary Pietrzak, Huntsy's director of marketing. Huntsy's cleaning it off with a slick UI and an organized and social approach to the intimidating job search. The bookmarklet in action Once you click "Add to Huntsy," the job will be added to your dashboard, which looks like this: The dashboard Image courtesy of iStockphoto, JulNichols

Facebook vs Pinterest (Infographic) Some of the biggest social media platforms today include integrated giants Facebook and newcomers Pinterest. Some organisations, even those who trade online, are still a little dubious over what social media can do for them. Boticca, artisan jewelry design e-commerce site, have grabbed the online media scenario with both hands and have really managed to wield the potential power modern social media can give to a company. This is really good news for the emerging jewellery designers they represent. Not only have www.boticca.com jumped in the social pool with both feet they have already been producing some really interesting, marketing relevant insights into the world they have seemed to have mastered. The infographic below shows consumer trends on the afore mentioned platforms and what Boticca have learned from their comparatively short sample space chosen. Have a read through, it’s really interesting stuff! Jewellery and Social Media – A New Study was researched and compiled by Boticca.

Women in Entertainment Empowerment Network Home » The WEEN career center is a portal where members can search and apply for various jobs, volunteer and internship opportunities inside and outside of the entertainment industry. In addition to searching for jobs, members are also allowed to post positions in which they may be trying to fill in their own company, organization or private firm. If you'd like to submit a job to be posted, please send an email to jobs@weenonline.org. **WEEN is not responsible for forwarding or validating any resumes from this portal. Design/animate/edit promos/gfx pckgs. Growing multimedia sports co. seeks experienced TV ad sales rep. Proactive, detail-oriented, creative, team player. 7+ yrs exp. with cable or BC sales team req'd. Looking for a talented Executive Assistant to support the Pres of Syfy. Resp. for acq, trking and forecasting of consumer info in support of corp. directives. 8+ yrs of primary and second rsch exp in media a must. Non-fic theatrical product, giant screen films & documentaries.

Facebook Finally Lets Page Admins Schedule Posts, Have Different Roles Third-party apps like HootSuite just got a little less relevant with an update from Facebook that lets Page admins schedule posts. A new help center page from Facebook also outlines how brand pages can now dole out specific duties to multiple page admins, each with varying degrees of permissions. The chart below outlines the new roles of manager, content creator, moderator, advertiser and insights analyst. A separate help center page from Facebook also provides an answer to one question many Facebook Page admins have been asking for some time: How do I schedule a post to appear later? Posts can be scheduled up to six months in advance at 15-minute intervals. SEE ALSO: 5 ways these new scheduling feature falls short

12 Ways to Optimize Your Resume for Applicant Tracking Systems Mona Abdel-Halim is the co-founder of Resunate.com, a job application tool that tailors and optimizes your resume for a specific job. You can find Mona and Resunate on Facebook, Twitter, and Google+. You filled out the job application, updated your resume and clicked “Submit.” But as the days or weeks pass, you never receive a phone call or email from the employer. What happened? Unbeknownst to many job seekers, a whopping 72% of resumes are never seen by human eyes. Wondering how you can optimize your resume and rank highly in the employer’s ATS? 1. 2. 3. 4. 5. 6. 7. 8. 9. 10. 11. 12. Unless you know your highly stylized resume won’t be taking a trip through an ATS, it’s best to save your infographic resume for the in-person interview and upload a .doc or PDF instead. Do you use the above tricks to avoid the resume “black hole”? Every week we post a list of social media and web job opportunities. Image courtesy of iStockphoto, vicky_81

'I Care' Facebook Button Shows Support For Causes Ever hesitate to "Like" that tragic story or update on Facebook? Now, those misstated sentiments can be be better explained with an embeddable "I Care" button on Facebook. "The 'I Care' button seeks to serve as an appropriate complement to the 'Like' button and can be easily leveraged by individuals and organizations alike to exhibit and inspire social activism," Matt Eastwood, chief creative officer of DDB New York -- the advertising agency that created the button -- said in a press release. "Now people will be able to do more with a button than just 'Like' something. The first "I Care" button went live last week on MTV Voices, an international social platform for young people. The average Facebook "Like" on a nonprofit's page can be translated to a value of $214.81 over 12 months, according to the 2012 Nonprofit Social Networking Report. "In the rush to 'go social,' many nonprofits are failing to think through their strategy," the authors note in the study.

What Is Your Best Job Interview Question? Congratulations, graduates! All those early-morning classes and late-night cramming sessions and what's your reward? A lousy job market. Sure, we've seen a steady, albeit modest, drop in the unemployment rate over the past several months, but the job market remains anything but robust. Just ask the millions who are still desperately looking for work. For them, and for new job seekers, the key question remains, "How can I stand out?" Resumes, of course, still matter. Here's the good news. So what is the person on the other side of that desk really looking for? JJ Ramberg Host, MSNBC's Your Business and Co-Founder, GoodSearch "The Host" "Would you be willing to put together an IKEA bookshelf?" Tom Szaky Founder, TerraCycle "The Eco-Capitalist" "What do you want out of this role and the company? Tate Chalk Founder and CEO, Nfinity "The Matador" "Why us?" Clint Greenleaf Founder and CEO, Greenleaf Book Group "The Cowboy" "When I call your old boss, what will she say about you?"

Maryland Bans Employers from Asking for Facebook Passwords Maryland has officially become the first state in the U.S. to ban employers from asking job applicants to surrender their user names and passwords for social media accounts, just weeks after two U.S. senators called for a federal investigation of the practice, calling it an invasion of privacy. Under the new bill, employers in both the public and private sectors will be prohibited from requesting or requiring current employees or job applicants to provide user names and passwords for social media sites like Facebook. The American Civil Liberties Union (ACLU) of Maryland said it is the “nation's first bill” that bans the practice. “Along with every other new law, we need to carefully weigh the pros and cons before we can make a commitment one way or another,” said Maryland’s Chief Innovation Officer Bryan Sivak in an emailed statement. Both the state House and Senate passed the bill last week after a much publicized incident in Maryland shed light on the issue. But last month, U.S.

As Job Growth Slows, Will Republicans Double Down On Austerity? By Pat Garofalo on June 1, 2012 at 10:05 am "As Job Growth Slows, Will Republicans Double Down On Austerity?" The Bureau of Labor Statistics today reported that the economy created a disappointing 69,000 jobs last month, and that the unemployment rate increased to 8.2 percent. At the same time, borrowing rates for the U.S. government have hit lows never before seen: Investors stampeded into U.S. government bonds Thursday, driving the interest rate on the 10-year Treasury note as low as 1.54 percent, a record…The record low rate beat the previous mark of 1.55 percent, which was set in November 1945. As Nobel Prize-winning economist Paul Krugman explained today, “When the private sector is frantically trying to pay down debt, the public sector should do the opposite, spending when the private sector can’t or won’t. Instead, Congress, driven by a cut-happy Republican House, has pursued austerity, leading to hundreds of thousands of public sector job losses.