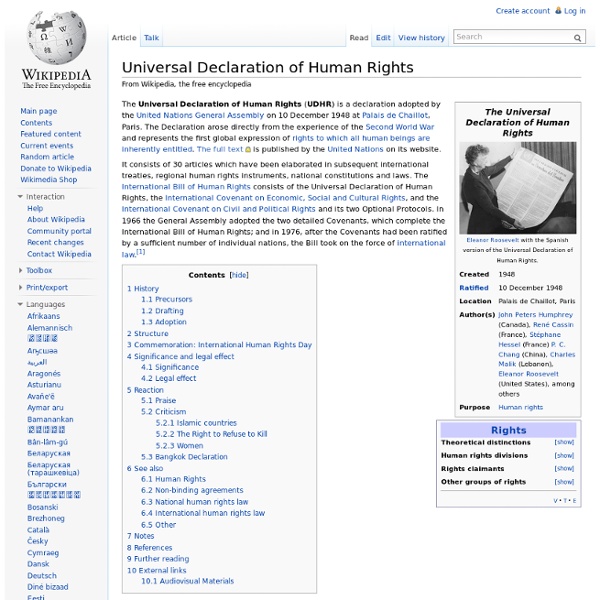 Four Freedoms The Four Freedoms were goals articulated by United States President Franklin D. Roosevelt on January 6, 1941. In an address known as the Four Freedoms speech (technically the 1941 State of the Union address), he proposed four fundamental freedoms that people "everywhere in the world" ought to enjoy: Roosevelt delivered his speech 11 months before the United States declared war on Japan, December 8, 1941. In that context, he summarized the values of democracy behind the bipartisan consensus on international involvement that existed at the time. Historical context[edit] When World War II began in 1939 with Germany’s invasion of Poland, the United States was still committed to its non-interventionist ideals. The 1939 New York World's Fair had celebrated Four Freedoms: religion, speech, press and assembly. Declarations[edit] The Four Freedoms Speech was given on January 6, 1941. The speech delivered by President Roosevelt incorporated the following text, known as the Four Freedoms: Notes[edit]

A history of the New World Order — Part II (Part I, in the previous issue, covered the years 1776-1928) 1928 – “The Open Conspiracy: Blue Prints for a World Revolution” by H. G. Wells is published. A former Fabian socialist, Wells writes: “The political world of the Open Conspiracy must weaken, efface, incorporate, and supersede existing governments. The Open Conspiracy is the natural inheritor of socialist and communist enthusiasms; it may be in control of Moscow before it is in control of New York. 1933 – “The Shape of Things to Come” by H. Nov. 21, 1933 – In a letter to Col. March 1942 – An article in “TIME” magazine chronicles the Federal Council of Churches [which later becomes the National Council of Churches, a part of the World Council of Churches] lending its weight to efforts to establish a global authority. June 28, 1945 – U.S. October 24, 1945 – The United Nations Charter becomes effective. 1961 – The U.S. April 1972 – In his keynote address to the Association for Childhood Education International, Chester M.

1960 AUSCANNZUKUS AUSCANNZUKUS History Early in World War II the lack of communications interoperability between Allied Forces became a matter of concern for all nations. During March 1941 the first high-level proposals to formally structure combined operations between the United States and the United Kingdom were considered. These discussions were the genesis of the current Combined Communications Electronics Board (CCEB). The origins of the AUSCANNZUKUS (A-Z) organization arose from dialogue between Admiral Burke, USN, and Admiral Lord Mountbatten, RN, in 1960. 1946 UKUSA Agreement The United Kingdom – United States of America Agreement (UKUSA, /juːkuːˈsɑː/ ew-koo-SAH)[1][2] is a multilateral agreement for cooperation in signals intelligence between the United Kingdom, the United States, Canada, Australia, and New Zealand. The alliance of intelligence operations is also known as Five Eyes.[3][4][5][6][7] In classification markings this is abbreviated as FVEY or the countries are listed like AUS, CAN, GBR, NZL, USA.[8] Emerging from an informal agreement related to the 1941 Atlantic Charter, the secret treaty was renewed with the passage of the 1943 BRUSA Agreement, before being officially enacted on 5 March 1946 by the United Kingdom and the United States. Currently, the global surveillance disclosure by Edward Snowden has shown that the intelligence-sharing activities between the First World allies of the Cold War are rapidly shifting into the digital realm of the World Wide Web.[15][16][17] History[edit] Origins (1940s–1950s)[edit] Investigations (1970-90s)[edit]

1943 BRUSA Agreement The 1943 BRUSA Agreement was an agreement between the British and US governments to facilitate co-operation between the US War Department and the British Government Code and Cypher School (GC&CS). It followed the Holden Agreement of October 1942. This led to the signing of the 1943 BRUSA Agreement on 17 May, which was a formal agreement to share intelligence information. It covered: the exchange of personneljoint regulations for the handling and distribution of the highly sensitive material The security regulations, procedures and protocols for co-operation formed the basis for all SIGINT activities of both the US National Security Agency and the British GCHQ. See also[edit] References[edit]

1941 Atlantic Charter The Atlantic Charter was a pivotal policy statement issued in August 14, 1941 that, early in World War II, defined the Allied goals for the post-war world. It was drafted by the leaders of Britain and the United States, and later agreed to by all the Allies. The Charter stated the ideal goals of the war: no territorial aggrandizement; no territorial changes made against the wishes of the people; restoration of self-government to those deprived of it; reduction of trade restrictions; global cooperation to secure better economic and social conditions for all; freedom from fear and want; freedom of the seas; and abandonment of the use of force, as well as disarmament of aggressor nations. In the "Declaration by United Nations" of 1 January 1942, the Allies of World War II pledged adherence to this charter's principles. The Atlantic Charter set goals for the post-war world and inspired many of the international agreements that shaped the world thereafter. Origin[edit] British Empire[edit]

1942 New World Map Outline of the Post-War New World Map. Published 1942, Philadelphia, PA The map was self-published by Gomberg and offered for sale for $1 in magazines such as American Teacher in 1942 and Survey Graphic in 1944 (seen here). The Outline of the Post-War New World Map was a map completed before the attack on Pearl Harbor[1] and self-published on February 25, 1942[2] by Maurice Gomberg of Philadelphia. It shows a proposed political division of the world after World War II in the event of an Allied victory in which the United States of America, the United Kingdom, and the Soviet Union would rule. The map includes a manifesto describing a "New World Moral Order", along with quotes from Roosevelt's Four Freedoms speech. Description of proposed territories on map[edit] The map proposes a total of 14 independent sovereign states, 13 of them democracies and 10 of them demilitarized. United States[edit] Port "Peace-security bases": Dakar and Freetown on the Atlantic coast of Africa Éire[edit]