Move Over Harvard And MIT, Stanford Has The Real “Revolution In Education” 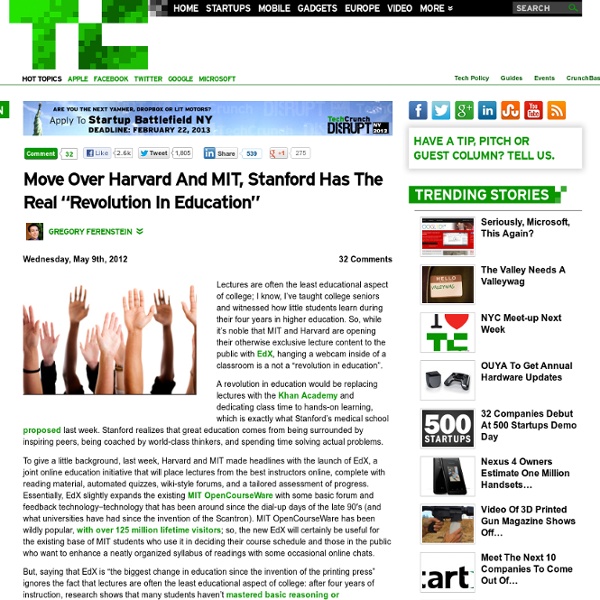 Lectures are often the least educational aspect of college; I know, I’ve taught college seniors and witnessed how little students learn during their four years in higher education. So, while it’s noble that MIT and Harvard are opening their otherwise exclusive lecture content to the public with EdX, hanging a webcam inside of a classroom is a not a “revolution in education”. A revolution in education would be replacing lectures with the Khan Academy and dedicating class time to hands-on learning, which is exactly what Stanford’s medical school proposed last week. Stanford realizes that great education comes from being surrounded by inspiring peers, being coached by world-class thinkers, and spending time solving actual problems. So, last week, two Stanford professors made a courageous proposal to ditch lectures in the medical school. Skeptical readers may argue that Khan Academy can’t compete with lectures from the world’s great thinkers. [Image via the University of Waterloo.] Related:  MCHS SCIENCE

Ending the 'tyranny of the lecture' Harvard professor Eric Mazur reveals how he uses peer instruction to make learning more dynamic—and how new software can facilitate this process By Dennis Pierce, Editor Read more by Dennis Pierce July 27th, 2011 Students need to assimilate information before they can apply it to a different context, Mazur said. At an educational technology conference in Boston July 27, Harvard University physics professor Eric Mazur explained how he uses “peer instruction” to help his students engage in deeper learning than traditional lectures can provide—and he unveiled a brand-new ed-tech service that can help educators take this concept to a whole new level. Mazur used a simple experiment to drive home his point that lecturing is an outdated—and largely ineffective—strategy for imparting knowledge. While the responses from the crowd varied—some cited practice or experience, while others said trial and error—no one answered “lecture,” Mazur noted wryly.

EdX Online Learning Project Announced By Harvard, MIT CAMBRIDGE, Mass. — Harvard and the Massachusetts Institute of Technology have joined forces to offer free online courses in a project aimed at attracting millions of online learners around the world, the universities announced Wednesday. Beginning this fall, a variety of courses developed by faculty at both institutions will be available online through the new $60 million partnership, known as "edX." "Anyone with an Internet connection anywhere in the world can have access," Harvard President Drew Faust said during a news conference to announce the initiative. MIT has offered a program called OpenCourseWare for a decade that makes materials from more than 2,000 classes available free online. It has been used by more than 100 million people. In December, the school announced it also would begin offering a special credential, known as MITx, for people who complete the online version of certain courses. Harvard has long offered courses to a wider community through its extension program.

Mass Incarceration and Criminal Justice in America A prison is a trap for catching time. Good reporting appears often about the inner life of the American prison, but the catch is that American prison life is mostly undramatic—the reported stories fail to grab us, because, for the most part, nothing happens. One day in the life of Ivan Denisovich is all you need to know about Ivan Denisovich, because the idea that anyone could live for a minute in such circumstances seems impossible; one day in the life of an American prison means much less, because the force of it is that one day typically stretches out for decades. It isn’t the horror of the time at hand but the unimaginable sameness of the time ahead that makes prisons unendurable for their inmates. That’s why no one who has been inside a prison, if only for a day, can ever forget the feeling. For most privileged, professional people, the experience of confinement is a mere brush, encountered after a kid’s arrest, say.

ABC Science Hot tags Weather Climate Change Planets and Asteroids Archaeology Fossils Editor's choice Sunday, 15 January 2017 RN Offtrack Counting birds to save the Murray-Darling Friday, 18 November 2016 Professor Richard Kingsford has spent much of his life counting birds: a critical body of work that shows Australia's rivers are under threat. Great Moments in Science The earworms you can't get out of your head Tuesday, 29 November 2016If you've ever had a song stuck in your head, you'll know it's annoying. Photos Incredible inner space Venture into the micro world of human anatomy and animals with teeth reinforced with iron, scales that reflect light and velvet 'fingers' on their skin captured by scientists from the Australian Microscopy and Microanalysis Research Facility. More galleries Science Quizzes Aussie birds quiz Can you tell the difference between a cuckoo and a cockatoo, or a peregrine and a penguin? Chemistry quiz Is your chemistry knowledge as light as helium or as heavy as plutonium?

100 Coolest Science Experiments on YouTube - X-Ray Technician Schools Although YouTube has something of a reputation as a repository for the inane mental diarrhea of stunted man-children injuring each other for cheap laughs or shrill teenage drama queens shrieking like harpies over the latest bland, interchangeable lump passing as the epitome of masculine beauty, many others thankfully take advantage of its services as a portal to share their knowledge and educate viewers. While few of the scientific offerings formally follow the scientific method or test an explicitly stated hypothesis, even those videos veering more towards demonstrating various principles, theories, and laws still offer visitors a chance to learn something about how the world around them operates. By this point, it should go without saying that many of the following videos contain procedures that may be dangerous to perform at home or without the proper equipment and/or training. Please do not duplicate any of these experiments unless assured that they are entirely safe for amateurs.