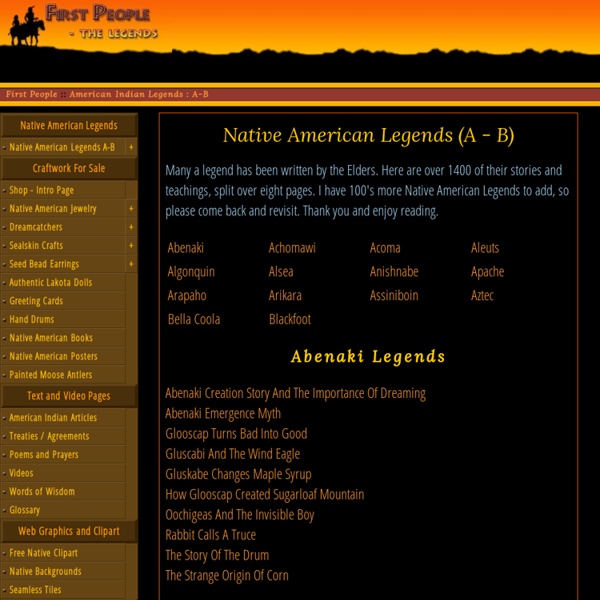 Creation Stories First Nations Native Creation < style="font-family: arial;">Note: the traditional words or names are underlined because the reading level drops when they are omitted Iroquois - Earth Diver (Reading Level: 7.1) The first people were the Sky People, they lived beyond the sky because there was no earth beneath.

How to Lucid Dream And Direct Your Night-Time Fantasies Imagine a world where you can easily conquer your biggest fears, travel at will to any location on the planet…or elsewhere, live out exciting, unbelievable adventures and even seduce a hopelessly sexy lover. It sounds like fantasy, but the impossible is in fact very possible through lucid dreaming. In this guide we are going to walk you through all the ins and outs of the fantastical, yet accessible, world of lucid dreaming. You’ll learn all about the benefits and how to lucid dream.We’ll answer the most common questions about lucid dreaming and discuss techniques that you can start trying today and tips and tricks for beginners.In this guide, you’re going to discover everything you need to know to start lucid dreaming. Get ready, because you’re about to begin an exciting adventure where walking on the sun is a piece of cake and monsters turn into friends. In the world of lucid dreaming, the laws of physics are turned upside down and there are no limits to the possibilities.

Native American populations descend from three key migrations, scientists say Scientists have found that Native American populations -- from Canada to the southern tip of Chile -- arose from at least three migrations, with the majority descended entirely from a single group of First American migrants that crossed over through Beringia, a land bridge between Asia and America that existed during the ice ages, more than 15,000 years ago. By studying variations in Native American DNA sequences, the international team found that while most of the Native American populations arose from the first migration, two subsequent migrations also made important genetic contributions. The paper is published in the journal Nature July 11. Storytelling Overview from the First Nations Pedagogy Online Project Storytelling First Nations, Inuit, and Metis cultures have long passed on knowledge from generation to generation through oral traditions, including storytelling. Storytelling is a traditional method used to teach about cultural beliefs, values, customs, rituals, history, practices, relationships, and ways of life. First Nations storytelling is a foundation for holistic learning, relationship building, and experiential learning. “The most important qualities of our culture are our language and our stories. In oral traditions such as ours, telling stories is how we pass on the history and the teachings of our ancestors.

Extinction of early natives by Europeans A new DNA study gravely illustrates the extent of the demise Native American populations suffered due to the arrival of Europeans. The large-scale study consisted of researchers reconstructing a genetic history of indigenous populations in the Americas by sequencing whole mitochondrial genomes extracted from bone and teeth samples of 92 pre-Columbian mummies and skeletons, each between 500 and 8600 years old. The study revealed a complete extinction of early American natives after the arrival of the Spanish in late 1400s. ”Surprisingly, none of the genetic lineages we found in almost 100 ancient humans were present, or showed evidence of descendants, in today's Indigenous populations," says joint lead author Dr Bastien Llamas, Senior Research Associate at Adelaide's Australian Centre for Ancient DNA (ACAD), which led the study. What happened to the first Americans? The atrocities carried out by the conquistadors and subsequent European arrivals are becoming more well-known.

The Learning Circle: Classroom Activities on First Nations in Canada - Ages 4 to 7 Crow and Little Bear A long time ago, there was a crow who lived by a big river. It was a very big river, with a strong rushing current and fierce rapids. The river was full of fish, but the current was too fast for Crow to attempt fishing. If she fell in the river, she would be swept downstream. One morning, Crow awoke to find a little bear on the beach by the river.

Hidden codex may reveal secrets of life in Mexico before Spanish conquest One of the rarest manuscripts in the world has been revealed hidden beneath the pages of an equally rare but later Mexican codex, thanks to hi-tech imaging techniques. The Codex Selden, a book of concertina-folded pages made out of a five-metre strip of deerhide, is one of a handful of illustrated books of history and mythology that survived wholesale destruction by Spanish conquerors and missionaries in the 16th century. Researchers using hyperspectral imaging, a technique originally used for geological research and astrophysics, discovered the underlying images hidden beneath a layer of gesso, a plaster made from ground gypsum and chalk, without damaging the priceless later manuscript. The underlying images must be older than the codex on top, which is believed to have been made about 1560 and was donated to Oxford’s Bodleian library in the 17th century by the scholar and collector John Selden.

In Search of the Lost Empire of the Maya This story appears in the September 2016 issue of National Geographic magazine. Your National Geographic Society membership helped fund recent excavations at Holmul and La Corona, Guatemala. The ancient city of Holmul isn’t much to look at. To the casual observer it’s just a series of steep, forested hills in the middle of the jungle in northern Guatemala, near the Mexican border. The jungle here in the Petén Basin is thick and warm but drier than you might expect. The Mohawks Who Built Manhattan (Photos) For generations, Mohawk Indians have left their reservations in or near Canada to raise skyscrapers in the heart of New York City. High atop a New York University building one bright September day, Mohawk ironworkers were just setting some steel when the head of the crew heard a big rumble to the north. Suddenly a jet roared overhead, barely 50 feet from the crane they were using to set the steel girders in place. “I looked up and I could see the rivets on the plane, I could read the serial numbers it was so low, and I thought ‘What is he doing going down Broadway?’”