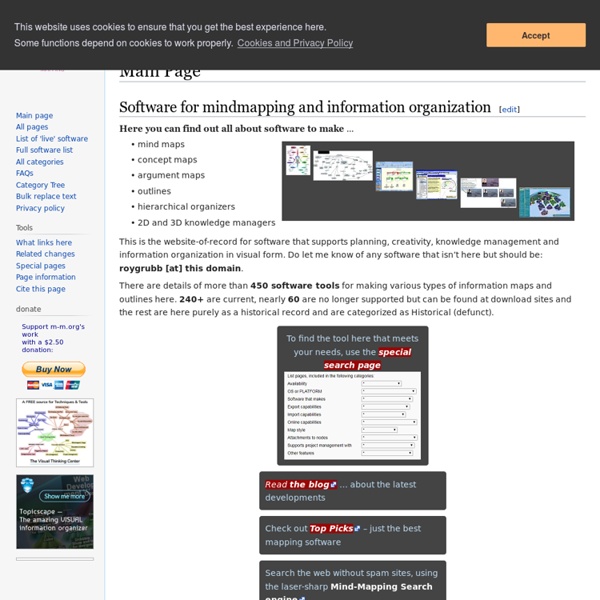 " 3D Topicscape: The information organizer for mindmappers and others.A flexible way to plan new projects and manage information. It's like concept mapping or mindmapping, but in 3D. You can even import FreeMind mind maps to build a 3D view from work you've already done in 2D (and export them again). - take in your To Do lists with just a glance at your 3D landscape; zoom in on part of the landscape and go back instantly; make live links to Outlook tasks, contacts, etc. (in Pro). - use the information organizer developed for mindmappers and project managers, easy for all to use

Poetry for Everyday Life The sentence is only worth quoting because in 28 words it contains four metaphors. Economies don’t really gain traction, like a tractor. Momentum doesn’t literally get snuffed out, like a cigarette. List of concept- and mind-mapping software Concept-mapping and mind-mapping software are used to create diagrams of relationships between concepts, ideas or other pieces of information. It has been suggested that the mind mapping technique can improve learning/study efficiency up to 15% over conventional note taking.[1] There are a number of software packages and websites that allow the creation of, or otherwise support mind maps. File format[edit] Using a standard file format allows interchange of files between various programs. Many of the programs listed below support the mm format used by FreeMind.

Mind-Map Search MindMapSearch.Org was founded in 2007 and is a sister site of Mind-Mapping.Org. I update it from time to time, but now it has just had a soup-to-nuts review and update. This, if you haven’t come across it yet, is a categorized source of all the authority mind mapping sites together with a focused mind mapping search engine. There are so many worthless web pages that claim to deal with mind mapping but have obviously been thrown together to attract clicks to the adverts on the page. They are recognizable, apart from the awful content, because they don’t even include a mind map! I got fed up with this and set up MindMapSearch to provide search results only from the sites that I know that deal with mind mapping well.

Using FreeMind Using FreeMind In this tutorial, we'll look at creating a mind map. Just to remind you, a mind map is a hierarchical set of nodes, connected together by edges (lines), which are displayed as a graphical map. The guide's choice of mind mapping software is FreeMind, an open source program, by Jörg Müller. If you haven't already downloaded and installed this program, the guide's article FreeMind – Mind Mapping will show you what to do.

Mind Map on Wikipedia A mind map about educational technology A mind map is a diagram used to visually organize information. A mind map is hierarchical and shows relationships among pieces of the whole.[1] It is often created around a single concept, drawn as an image in the center of a blank page, to which associated representations of ideas such as images, words and parts of words are added. Incredibly Detailed Shadow Sculptures by Diet Wiegman Artist Diet Wiegman manages to sculpt mounds of irregularly shaped structures that are transformed into an intricately detailed silhouette when a light shines on it from a precise angle. Similar to the light and shadow sculptures of artistic duo Tim Noble and Sue Webster, Wiegman leaves audiences in awe with his puzzling ability to cast remarkably figurative shadows from heaps of seemingly abstract sculptures. An oddly configured work that branches out unpredictably is, in fact, meticulously sculpted to cast a shadow that realistically resembles Michael Jackson.

Visual Thinking Evolution A mind map is a diagram used to represent words, ideas, tasks, or other items linked to and arranged around a central key word or idea. Especially in British English, the terms spidergram and spidergraph are more common,[1] but they can cause confusion with the term spider diagram used in mathematics and logic. Mind maps are used to generate, visualize, structure, and classify ideas, and as an aid to studying and organizing information, solving problems, making decisions, and writing. The elements of a given mind map are arranged intuitively according to the importance of the concepts, and are classified into groupings, branches, or areas, with the goal of representing semantic or other connections between portions of information.

MindTools A Powerful Approach to Note-Taking (Also known as Mind Mapping, Concept Mapping, Spray Diagrams, and Spider Diagrams) "Mind Map" is a trademark of the Buzan Organization (see www.buzan.com). iMindMap - Basic People within organisations and educational institutions around the world are already seeing the benefits of iMindMap – start discovering them yourself today. “Your Mind Mapping software has transformed our business & become a part of our cultural DNA.” Wheaton Wealth Partners, USA The Ultimate Guide to Mind Maps and Mind Mapping Tools What Are Mind Maps? Mind Maps are a way of visually organizing information that help you identify and understand the structure of a subject at a glance. They allow you to create logical connections between concepts that show how pieces of information fit together, providing you with a “map” of your ideas, processes, and concepts. You can use mind maps for many things such as outlining presentations, ebooks, and content plans, engaging in logical problem solving, and mapping out user experiences online and in the real world. Popularized by British psychologist Tony Buzan, mind maps differ from conventional note taking or planning by presenting a non-linear form, which is moe akin to brain storming and the way the mind creates. Buzan posits that mind mapping is the most superior form of note taking because it helps avoid the “semi-hypnotic trance” state that other methods induce, i.e., it’s a lot less boring to use than Word.

Christopher Alexander - a theory of incremental design You probably know Christopher Alexander, at least indirectly. Christopher Alexander is an architect. But not a J2EE architect, you geek! 15 common mind map elements Jul 3rd, 2012 | By Chuck Frey | Category: Resources If you’re new to the world of mind mapping software, you may not realize all of the types of content you can include in a software-produced visual map. So I created a mind map to summarize what’s possible.

mind-mapping.org software search engine... has a wide variety of software for information visualization. by jerryp Oct 11