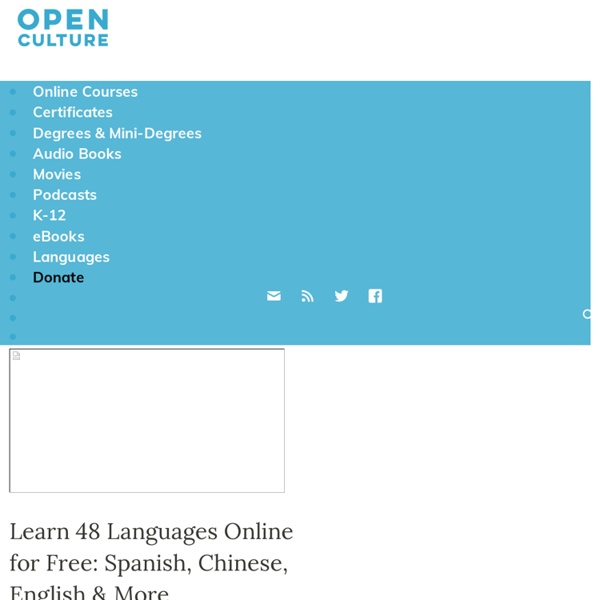 Experimenting with English (Part 2) – Activities for learners to do outside the classroom [26 and counting!] In my blog post Experimenting with English: scaffolding learner autonomy, I discussed how I approached helping my learners to use English outside the classroom, drawing on learner autonomy theory and methodology (e.g. Benson, 2011; Oxford, 2003; Smith 2003). Central to that project, alongside the very important element of discussion, was a handout I created for my learners. The LOC Launches the National Screening Room Online The Library of Congress has a new online collection called the National Screening Room. The National Screening Room currently contains 287 videos. The videos are digital copies of films made in the 19th and 20th centuries. You can browse the collection by date, location of the filming, and subject. You can also search for videos that are parts of other LOC collections. All of the videos in the National Screening Room can be viewed online and or downloaded as MP4 files.

Free Language Tutorials: Basic Phrases, Vocabulary, Grammar, and Pronunciation in 20 Languages Currently, twenty languages are available: 17 Indo-European and 3 non-Indo-European. There are also Foreign Service Institute (FSI) courses available in HTML format as well as two comparative tutorials for those who want to learn two languages simultaneously. Lists of vocabulary and verb conjugations are available for some Romance and Germanic languages, as well as other helpful ideas, resources and links for learning foreign languages. Some of the tutorials also include audio resources and online exercises, indicated by the headphones and notebooks below. The following pages are not language-specific tutorials, but instead focus on learning languages in general:

Learning Arabic from Egypt’s Revolution When you move to another country as an adult, the language flows around you like a river. Perhaps a child can immediately abandon himself to the current, but most older people will begin by picking out the words and phrases that seem to matter most, which is what I did after my family moved to Cairo, in October of 2011. It was the first fall after the Arab Spring; Hosni Mubarak, the former President, had been forced to resign the previous February. Every weekday, my wife, Leslie, and I met with a tutor for two hours at a language school called Kalimat, where we studied Egyptian Arabic. At the end of each session, we made a vocabulary list. In early December, following the first round of the nation’s parliamentary elections, which had been dominated by the Muslim Brotherhood, my language notebook read:

What My Connected Students Taught Me about Motivation After eight years of teaching in a technology driven high school and after attending workshops, seminars and conferences worldwide, I thought it was about time I challenged both my students and myself. I wanted to see if it was possible to find a project that could engage every student in my 9th grade class of English learners and learn if they all could work together as a team. Most of all, I wanted to see if they could produce an end product that would be authentic and involve collaboration with educators and students globally.

Listen to English around the World. Click on any of the flags below to hear accents from some of the main English-speaking countries. Hear more English accents. One of the best ways of improving your English is to listen to radio news and discussion in English on your computer. Historic Maps Welcome to ETC's collection of historic maps. Here you will find over 5,000 maps representing many different time periods. A friendly license allows teachers and students to use up to 25 maps in non-commercial school projects without further permission.

German Online Interactive This website is for people who want to learn German online; for teachers who want materials and webexercises to supplement their teaching curriculum; for speakers of German to find resources for news, humor, travel, and business events; and for anyone interested in the use of the Internet to learn and maintain German as a foreign language. To support this website, and to keep all the resources free, please consider purchasing your books and other media through the following pages: Books | Audio CDs and Cassettes | DVDs and Video tapes | Software | Games | Magnets

List of languages by time of extinction This is a list of extinct languages sorted by their time of extinction. When the exact time of death of the last remaining speaker is not known, either an approximate time or the date when the language was last being recorded is given. However, the list is not complete. List[edit] Typing Games Ms. Sapkarov, you type FAST! Yes, my friends, I really do. We're reading Rebecca Stead's When You Reach Me in one of my 5th grades and taking notes on the characters at the end of each class. By building these character profiles, we can understand the story better by looking at individual motivation and personality traits.

Recipes for the EFL classroom Not sure what to do with a listening text coming up soon in the unit? Don’t like the comprehension questions in the book? Want some ideas to liven it up? Pre-listening Prediction work can be a really useful pre-listening activity, preparing the students for what they are about to hear.