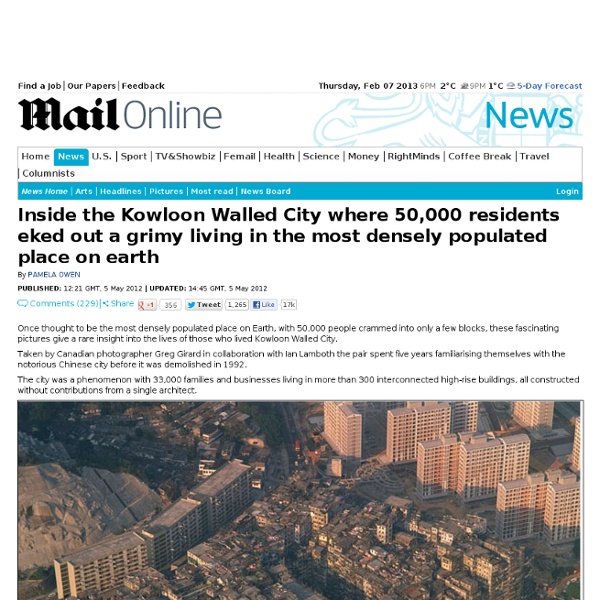 By Pamela Owen Published: 12:21 GMT, 5 May 2012 | Updated: 14:45 GMT, 5 May 2012 Once thought to be the most densely populated place on Earth, with 50,000 people crammed into only a few blocks, these fascinating pictures give a rare insight into the lives of those who lived Kowloon Walled City. Taken by Canadian photographer Greg Girard in collaboration with Ian Lamboth the pair spent five years familiarising themselves with the notorious Chinese city before it was demolished in 1992. The city was a phenomenon with 33,000 families and businesses living in more than 300 interconnected high-rise buildings, all constructed without contributions from a single architect. Kowloon Walled City was notorious for drugs and crime but many of its 50,000 residents lived their lives peacefully until it was demolished in the early 90s Canadian photographer Greg Girard and Ian Lambot spent five years getting to know the residents and taking pictures of the densely populated buildings Related:  Technopoetique • musings (and other fun things)

Queen's Diamond Jubilee marked by amazing aerial pictures showing Britain from above By Daily Mail Reporter Published: 11:18 GMT, 6 May 2012 | Updated: 09:01 GMT, 8 May 2012 This brilliant new collection of aerial photographs giving a spectacular bird's eye view of Britain from above has been released to mark the Queen's Jubilee year. Bustling cities contrast with serene stretches of glorious countryside as sites that might seem ubiquitous from the ground are transformed into unique and wonderful images when viewed from above. The heart-stopping shots are the work of dedicated aerial photographer Jason Hawkes who developed a real love of Britain's varied landscape since taking his first flying lesson 20 years ago. Britain From Above Month by Month, by Jason Hawkes, published by DK, £20, Also available as an e-book from the iBookstore. Perfect location: The Glenfinnan Viaduct in Scotland featured in the Harry Potter films Jubilee year: Buckingham Palace dominates the landscape in this aerial view of London Field of dreams: The Oval cricket pitch in South London at night

Freedom’s Ring: King’s “I Have a Dream” Speech I'm a shut-in. This is my story. Once Upon a Time in Dubai - An FP Slide Show Today, Dubai is known as a gleaming, glittering cosmopolitan oasis, crowned by the world's tallest building, the Burj Khalifa. But it was not long ago that the city was as familiar with camels and dhows as it is now with Ferraris and indoor ski slopes. The regional oil boom changed everything: As the Gulf states found themselves flush with trillions in petrodollars, the tiny emirate positioned itself as a financial entrepot and regional hub for construction and tourism. While the global recession hit it hard, leading many to speculate about a " Dubai bubble ," the emirate has rebounded nicely -- its economy is projected to grow by more than 4 percent this year after reinventing itself as a financial safe haven amid the Arab Spring, earning a spot on what the I nternational Herald Tribune calls the New Silk Road . The following pictures, taken in the late 1960s and early 1970s, show a society just on the cusp of the ambitious development that would soon be its hallmark.

Funerals for Fallen Robots - Megan Garber New research explores the deep bonds that can develop between soldiers and the machines that help keep them alive. When Boomer was lost on the battlefield in Taji, Iraq, his brothers in arms gave him a funeral. The tribute involved a 21-gun salute, and the awarding of both a Purple Heart and a Bronze Star Medal. It was a funeral that was typical in every way but one: Boomer was a machine. The little bastards do save lives. That's according to research conducted by Julie Carpenter, a researcher at the University of Washington who studies the emotional relationships that humans can develop with machines. Carpenter's work follows in a long tradition of academic research that has sought to understand whether -- and, more accurately, how -- human empathy extends to inanimate objects. From that perspective, it makes sense that the tools that do so much work in the high-stakes environment of the battlefield would engender devotion from the people they benefit. Indeed. Everyone survived.

Giant wasps' nest found growing on single bed in spare bedroom | Environment Giant wasps' nest found in Winchester home. Pest controller John Birkett said: 'In 45 years I have never seen anything like it.' Photograph: John Birkett/Longwood Services Pest Control A man who went into a rarely used spare room in his mother's home was shocked to discover that 5,000 wasps had made a giant nest in the bed. The nest, 3ft wide x 1.5ft deep, was still expanding and the insects had chewed through the mattress and pillows to build it. When pest controller John Birkett was called to the scene he realised it had been growing for several months. Birkett, of Longwood Services, said: "We got a call as we normally do … but a bedroom – I thought that was unusual. "In 45 years I have never seen anything like it. "I got dressed up like a spaceman and tried to destroy as many as I could with the workers flying around the room. He said the only nest he had previously found in a room was about the size of a tennis ball.

Iconic ‘napalm girl’ photo from Vietnam War turns 40  NICK UT/AP Kim Phuc, center, with her clothes torn off, flees with other South Vietnamese children after a misdirected American aerial napalm attack on June 8, 1972. TRANG BANG, Vietnam — In the picture, the girl will always be 9 years old and wailing “Too hot! Too hot!” as she runs down the road away from her burning Vietnamese village. She will always be naked after blobs of sticky napalm melted through her clothes and layers of skin like jellied lava. She will always be a victim without a name. It only took a second for Associated Press photographer Huynh Cong “Nick” Ut to snap the iconic black-and-white image 40 years ago. But beneath the photo lies a lesser-known story. “I really wanted to escape from that little girl,” says Kim Phuc, now 49. AP photographer Huynh Cong Ut takes a picture of Phan Thi Kim Phuc as she sits on a seawall in Havana in this August 1989 photo. It was June 8, 1972, when Phuc heard the soldier’s scream: “We have to run out of this place! “Ba-boom!

Rice Bucket Challenge Rules: How to Participate in India's Version of Ice Bucket Challenge Indians have started the Rice Bucket Challenge after being inspired by the success of the Ice Bucket Challenge in the United States. The Facebook page promoting the challenge says that the rules are simple–donate one bucket full of rice to the poor. “If you too think you can make a difference, you can make the world a better place for everyone then i challenge you to donate one bucket full of rice to the poor. “The original idea of indian version is conceptualized by Manju Latha Kalanidhi and is so inspiring that it needs to spread across India! The journalist Kalanidhi, 38, told QZ that she thought it was senseless to copy the Ice Bucket Challenge in India because of reasons including clean water is hard to come by. “The idea of dunking oneself in icy cold water, shrieking in horror and then uploading the bizarre video felt preposterous.