How to Supercharge Your Dropbox or Google Drive with Wappwolf 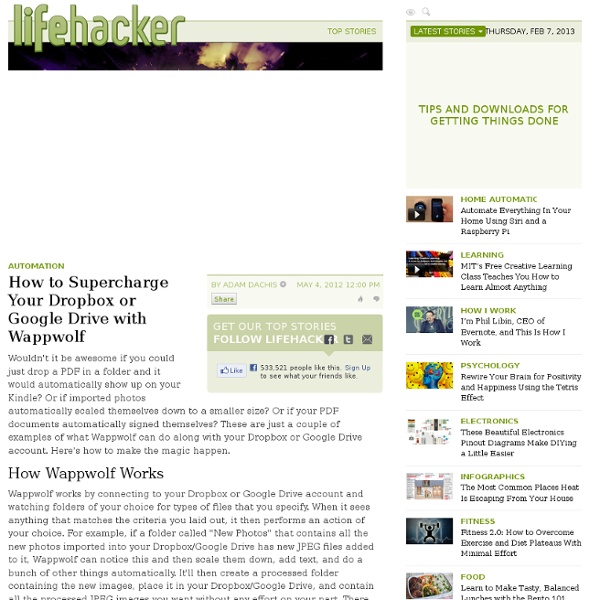 Automation News, Videos, Reviews and Gossip - Gizmodo SExpand @macrumpton: Click the image for the full size to see what I'm talking about. Here's a side-by-side shot of Miro and MPC, both playing the same frame of "Pioneer One" S01E01 720p (h264) mkv file. Even if you don't want to go the media center route, and are content with Miro for downloading, I highly suggest you get a good graphics card (if you need one) and a separate program to decode and play back the files. Miro is not comparable to a true Media Center by any stretch of the imagination. Things Miro is lacking: • Good support for remotes and internet/eventserver based control for phones. • Proper databasing (sort by name, aired date, release date, actor, genre, MPAA/TV rating, duration...) • Auto-discovery of missing supplemental media (Fanart, screen caps, cover art, subtitles and lyrics etc.) • Boot as an OS for HTPCs • User login with parental controls • Scripting and skinning extensability • Media flagging

Spotify - Large Scale, Low Latency, P2P Music-on-Demand Streaming by Gunnar Kreitz, Fredrik Niemelä Published in Proceedings of IEEE P2P'10 Abstract Spotify is a music streaming service offering low-latency access to a library of over 8 million music tracks. The service currently has a user base of over 7 million and has been available in six European countries since October 2008. Download Automation News, Videos, Reviews and Gossip - Gizmodo @Domo: That's what he gets for being too slow! @Navin R Johnson: Couple of flaws with that. 1. They can take off their mask and get more 2. @BigCanada: 1. 2. I envision a system that recognizes that a group has arrived, estimates the number of people (erring on the high side) and dispenses candy. Voice prompting from the system will help the trick-or-treators to know what to do. Multiple trips to the door will result in multiple candies, yes.

Automation News, Videos, Reviews and Gossip - Gizmodo @hahn: I don't know about all that. With the right safeguards in place, I think this would be secure enough for my tastes: 1. 2. 3. 4. 5. 6. Believe it or not, I'd feel a bit more secure with this system (with some tweaks) than a traditional lock-and-key system for the same reason I feel better about having extraneous cards in my wallet: If my phone (or overstuffed wallet) is missing, I'm going to know it.

Automation News, Videos, Reviews and Gossip - Gizmodo I appreciate what you're saying here, but I tend to disagree with most of it. I think things like text expansion actually offer an alternative to the shorthand writing conventions that have been ushered in with the era of SMS and Twitter. Text expansion is able to yield identical results in fewer keystrokes. This promotes efficiency, not laziness. In fact, I would argue that text expansion actually serves to mitigate some of the adverse effects of laziness. Naturally, I would expect you to respond that there are certain circumstances and modes of communication among which "laziness" is excusable, if not appropriate, and I'd have to agree. I can't agree with your comparing the writer to a musician playing an improper chord either. k thx 4 reading thru that ^ =p lol P.S. Yes, writing is crafting sentences and love of language and fashioning patterns and weeping over beauty. Lighten up, Mr Angsty One True Writer. I can see your point.

Automation News, Videos, Reviews and Gossip - Gizmodo Agreed. Linux users get no love from LH :( Most linux users don't need any love;) Sorry, that came in mind when I'd read your comment. The author didn't want to have to bring up KDE's "activity" support that lets you change background, widgets, multple desktops, running programs, etc. all at once according to an assigned "activity". "A user likes web comics so they add their favorite web comics via the comics widget. The user now has a full desktop activity dedicated to their favorite web comics. -KDE user guide Windows users would get jealous, OSX users' reality distortion field would collapse, and Ubuntu users... well, they're still trying to figure out their new user interface so they probably haven't been able to read this article yet. :-) So, for the greater good a Linux version had to be omitted. :-)

Automation News, Videos, Reviews and Gossip - Gizmodo For door locks, I went with the medium-tech approach: electronic keypad locks. Schlage, for example, makes a line of electronic keypad locks that can generally fit into existing door lock holes. For me, it was a simple matter of unscrew/remove old lock, screw in/install new lock, and program new lock. However, possible downsides include (this is for the Schlage electronic deadbolt that I use): * The visible parts of the locks are a bit big/wide. * It's a keypad: if someone sees you enter your combination, you're screwed. * Unlocking with a key is slightly funky: insert key while holding handle, turn key 90 degrees without turning handle, push key in, turn handle to lock/unlock.