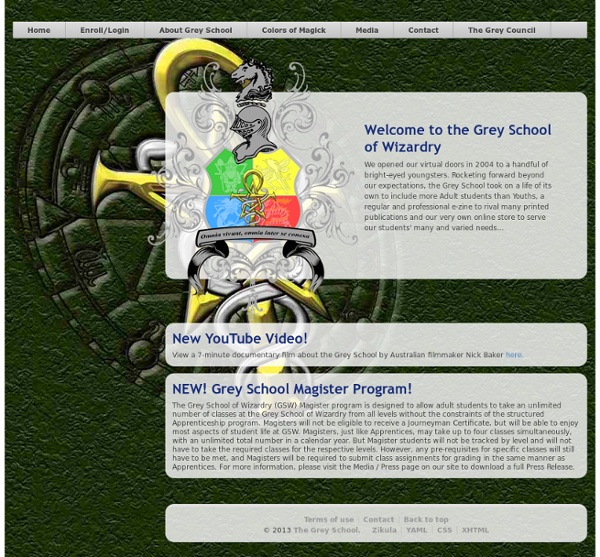 Keep Magickal Education Affordable! Dear Students of the Grey School of Wizardry: This year the Grey School is 10 years old! And how we have grown! We have increased the number of classes available to over 470 and all 16 majors can be completed. Now we are turning to you, our adult students, to help us to grow even more. As you know, our only income is from our modest tuitions and donations.

Path-working on the Qabalistic Tree of Life - Alex Sumner Path-working on the Qabalistic Tree of Life by Alex Sumner Introduction "Path-working" is a comparatively new phenomenon in the Western Mystery Tradition, as it does not seem to have existed as an occult practice prior to the occult revival of the late nineteenth century. Yet nowadays it is an established practice amongst many schools of magical thought. Pat Zalewski reveals that it is part of the curriculum for a Theoricus Adeptus Minor of the Golden Dawn[1]; it is described in the writings of Dion Fortune[2], Israel Regardie[3], Melitta Denning and Osborne Phillips[4] to name but a few.

Phases of the Moon Enter a year between 1700 and 2035 in the form below and press the "Get Data" button to obtain a calendar showing the dates of the primary phases of the Moon for that year. Definitions For definitions of the phases, see the explanation of Phases of the Moon and Percent of the Moon Illuminated in the Astronomical Information Center. In addition, the explanation of Crescent Moon Visibility discusses the waxing crescent phase. Time Format What did the Knights Templar Do The Knights Templar were created by the pope to escort and protect "tourists" going to the Holy Land, and to fight Muslims there. There were originally only a handful, but there were thousands by the time they were disbanded in the 1300's. They were the first bankers. A person could deposit money at one Templar institution, receive a voucher, and turn it in at any other Templar institution.

Magickal Athenaeum - WikiPagan The Magical Athenaeum is the largest collection of magickal PDF books on the internet, with several hundred files. The resource is maintained by Asiya's Shadows. Books are in the Adobe Portable Document Format (PDF) and may be viewed and printed using Adobe Reader. Magical Athenaeum Paganism & Witchcraft The Odin Brotherhood Grimoar - Occult Texts Welcome to our library Welcome in our occult texts library. It contains 2052 unrevised texts in pdf, doc and other formats. Librarians are responsible neither for text redaction nor for their contents.

Top 10 Unusual Ancient Weapons Weird Stuff Mankind always has, and always will, fight wars. And in order to fight said wars, man needed weapons. Using whatever skills and resources they had, man built tools that would slash, smash, pierce and tear their enemies. Every nation had weapons that made their armies unique. Today when we talk about ancient weapons we immediately think swords, spears, bows and axes.

We Are the Other People Oberon (Otter) Zell The following is an Article published three or four years ago in Green Egg. "Ding-dong!" Higher consciousness Higher consciousness is the consciousness of a higher Self, transcendental reality, or God. It is "the part of the human being that is capable of transcending animal instincts". The concept developed in German Idealism, and is a central notion in contemporary popular spirituality. The major world religions The information provided below is intended to provide a short introduction to the major world religions as defined classically. Each description has been kept very short so that it is easy to read straight through all of them and get a general impression of the diversity of spiritual paths humanity takes to live the kind of life God wants. As a result, a great many things have been omitted.

Introduction to Tarot Cards Tarot Class by Michele Introduction to the Tarot The course will be generic in nature and will not be keyed to any specific deck. As long as you are using a standard Tarot deck with a theme that does not cause the interpretations to stray too far from the traditional, you should be able to follow along. The interpretations given will be simple, basic and have been culled from many sources. Legendary creature A legendary creature is an animal whose life is accounted in non-historical or yet to be verified stories that sometime involve the supernatural. However, other legendary animals, such as the unicorn, were documented in accounts of natural history by various scholars of antiquity.[1] Due to the lack of fossils of these creatures, the veracity of these historical recordings is questioned by modern zoologists. Some of the these creatures can also be cryptids, although the terms are not synonymous.