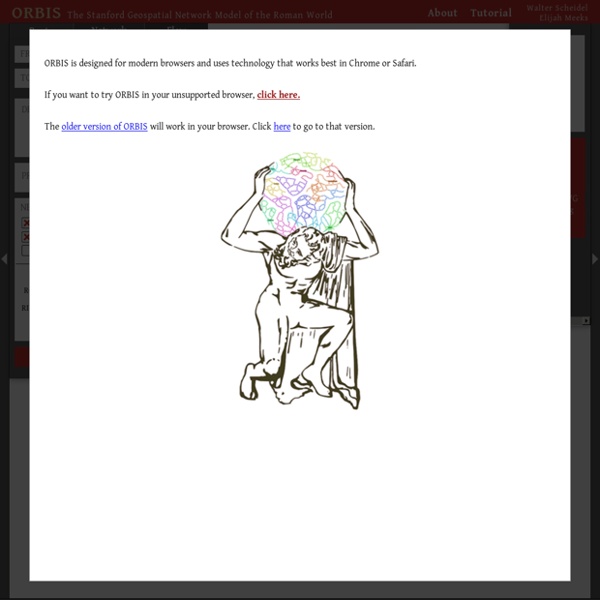 In the aggregate, our model simulations make it possible to reconfigure conventional maps of the Roman Empire to express the relative cost of transfers from or to a central point as distance. This perspective captures the structural properties of the imperial system as a whole by identifying the relative position of particular elements of the network and illustrating the impact of travel speed and especially transport prices on overall connectivity. Distance cartograms show that due to massive cost differences between aquatic and terrestrial modes of transport, peripheries were far more remote from the center in terms of price than in terms of time. Due to an unexpectedly high volume of traffic to the site, performance of the routing map and interactive cartogram are not what they should be. If you experience delays performing route calculations or rendering the map, you can try refreshing the map by zooming in or out.

Enduring Voices Project, Endangered Languages, Map, Facts, Photos, Videos Explore Talking Dictionaries The Enduring Voices team is pleased to present these Talking Dictionaries, giving listeners around the world a chance to hear some of the most little-known sounds of human speech. Several communities are now offering the online record of their language to be shared by any interested person around the world. Your Life On Rollerblades: Healthier And Better For The Environment More than half of all Americans live within five miles of where they work. But, rather than bike, walk, or take public transportation, the overwhelming majority take cars. According to the U.S. Census Bureau, 77% drove to work alone in 2010, with another 10% roughly going via some sort of carpool. About 5% took public transit.

Le théâtre romain d'Autun Author Christophe Barroy Dimensions File Res Obscura: The Most Wonderful Map in the World: Urbano Monte's Planisphere of 1587 At some point in 1589, a Milanese cartographer named Urbano Monte made up his mind: his self-portrait needed updating. Monte carefully crouched over the section of his map that bore his self-portrait from two years earlier — close-cropped sandy hair, a trim beard, modest clothes — and pasted a new self-portrait over it. The resulting double self-portrait (Monte at 43, hidden beneath a new portrait of Monte at 45) testifies to the persistence of male pattern baldness throughout human history. It also exemplifies Monte's astonishing attention to detail. The task he had set himself was to map every corner of the known world, not only showing cities, rivers and mountains, but giving warnings about monsters (beware the trickster spirits that lurk in Central Asian deserts) and wondrous beasts like unicorns.

NOS Special Projects - NOAA Historical Shoreline Survey Viewer What is a Shoreline Survey? Shoreline surveys (also called coastal surveys, T-Sheets or TP-Sheets, and shoreline manuscripts) refer to topographic sheets compiled from maps derived in the field with a plane table, in the office from aerial photos, or a combination of the two methods. These shoreline surveys are the authoritative definition of the U.S. high-water line and may also include details such as roads, prominent buildings, and other features along the coast. BB Little Garden Is a Gadgety Solution to Growing Herbs Indoors © François-Xavier Martouzet We've seen many designs over the years for growing herbs indoors. While they use up more resources and energy than just putting some pots out on the porch, they're important designs for foodies who like to cook with their own fresh herbs even though they live in apartments where they can't grow their own plants, or want fresh herbs during winter.

Historical maps home page Down to: 6th to 15th Centuries | 16th and 19th Centuries | 1901 to World War Two | 1946 to 21st Century The Ancient World ... index of places Aegean Region, to 300 BCE Aegean Region, 185 BCE Map: Vaccine-Preventable Outbreaks This interactive map visually plots global outbreaks of measles, mumps, whooping cough, polio, rubella, and other diseases that are easily preventable by inexpensive and effective vaccines. Red triangles indicate attacks on vaccinators and healthcare workers, as well as announcements from both governments and non-state actors that have had an impact—either positive or negative—on the successful implementation of vaccination programs. The Global Health Program at the Council on Foreign Relations has been tracking reports by news media, governments, and the global health community on these outbreaks since the fall of 2008. This project aims to promote awareness of a global health problem that is easily preventable, and examine the factors that threaten the success of eradicating preventable illnesses such as polio.

Build a Battery-Free Radio With a Glass Bottle Have you ever built a crystal radio? Have you ever built a battery-free crystal radio? I haven't but this project from MAKE Projects makes me really want to try it out! You need no power source, and can repurpose a glass bottle to do the job! This is a "Featured Project" , which means it "has been found to be exceptionally cool by the MAKE staff" -- and we also find it to be exceptionally cool.

Worlds Revealed: Geography & Maps at The Library Of Congress This is a guest post by Kelly Bilz, Librarian-in-Residence in the Geography and Map Division. Even though Latin had fallen out of vernacular use after the fall of Rome (and began to evolve into the modern Romance languages), it lived on in its written form, becoming the lingua franca, so to speak, of scholarship. In particular, western cartographers during the Renaissance used Latin in their maps, resulting in a large collection of maps in the Geography and Map Division written in this ancient language. Seeing these polysyllabic words in a long list of search results can be disorienting; fortunately, being familiar with a couple key terms can help you navigate Latin titles with ease– without having to study Latin for eight years, as I did!