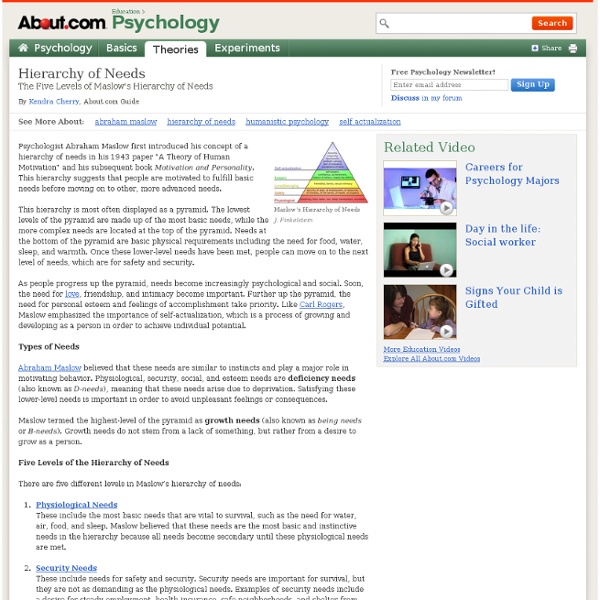 What motivates behavior? According to humanist psychologist Abraham Maslow, our actions are motivated in order achieve certain needs. Maslow first introduced his concept of a hierarchy of needs in his 1943 paper "A Theory of Human Motivation" and his subsequent book Motivation and Personality. This hierarchy suggests that people are motivated to fulfill basic needs before moving on to other, more advanced needs. This hierarchy is most often displayed as a pyramid. As people progress up the pyramid, needs become increasingly psychological and social. Types of Needs Abraham Maslow believed that these needs are similar to instincts and play a major role in motivating behavior. Maslow termed the highest-level of the pyramid as growth needs (also known as being needs or B-needs). Five Levels of the Hierarchy of Needs There are five different levels in Maslow’s hierarchy of needs: Criticisms of Maslow’s Hierarchy of Needs

Home - Gnostic Media What is Religion? Definitions and Quotes 25.2KGoogle + What is the Definition of Religion? The question is not easy to answer. As St. The groups, practices and systems that people identify as "religions" are so diverse that it is no easy task to bring them all under one simple definition. "Religion: A general term used... to designate all concepts concerning the belief in god(s) and goddess(es) as well as other spiritual beings or transcendental ultimate concerns." ~ Penguin Dictionary of Religions (1997). "Religion: Relation of human beings to God or the gods or to whatever they consider sacred or, in some cases, merely supernatural." ~ Britannica Concise Encyclopedia (online, 2006) "Religion: Human beings' relation to that which they regard as holy, sacred, spiritual, or divine." ~ Encyclopædia Britannica (online, 2006) "The religious response is a response to experience and is coloured by the wish to provide a wider context for a fragile, short and turbulent life "One's religion is whatever he is most interested in."

Truth in American Education Let’s Abolish Central Banks! - Coordination Problem Central banks and their monopoly on notes issuance have been around for quite a while. The Bank of England, perhaps the oldest institution of its kind, was established at the end of the 17th century. La Banque de France was established in 1800 by Napoleon to help him, among other things, finance his military conquests. The Federal Reserve System was established in 1913 to help avoid bank runs and panics and "to furnish an elastic currency, to afford means of rediscounting commercial paper, to establish a more effective supervision of banking in the United States, and for other purposes" (the latter includes striking a balance between private interests of banks and the centralized responsibility of government). The Reserve Bank of New Zealand (deemed one of the best central banks in the last twenty years) was established in 1934. Overall, as many have argued, including Milton Friedman, central banks’ track record in the last two hundred years has been pretty abysmal.