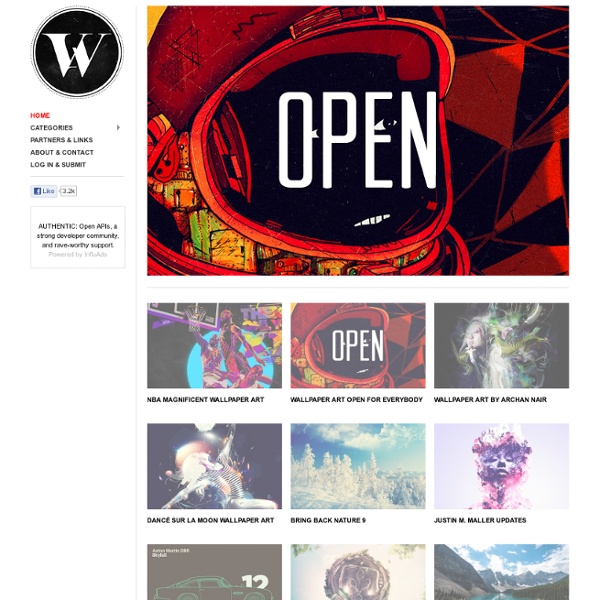 Disable PC Speaker Beep Introduction The computer often seems to make beep noises or other sounds at various times, whether we want them or not. They come from various sources, and as such, you may be able to configure if or when they occur. Further, the sounds from the computer can be heard from the built-in case speaker, or the speakers which are plugged into the sound card. Best Wallpaper Download Sites 2 Series 2 of Best Free Desktop Wallpapers Sites for Single & Wide Monitor users. Wallpapers for Windows Vista , Mac OSX , Ubuntu. Cool wallpaper sites of Car, Model, Artist and so on.. Most sites provides high quality 1600x1200 resolution wallpapers This article is 9th one of Best Sites List Series 1. Best Dual Monitor Wallpapers Sites List2.

Digital Blasphemy 3D Wallpaper: Updates There are canvas and poster versions available too! I rendered this one for single-screen first and the multiscreen version is rendering now on Bucephalus. I know a lot of you aren't nearly ready for winter yet (I know I'm not) but, as the Starks have said, it's coming. My first snowy render of the year is the winter version of "Autumn Revelation". 30 Mudbox Tutorials for Beginners and Professionals Mudbox is a 3D sculpting and painting tool that is commonly used for character design for movies and games. First used in Peter Jackson’s King Kong, Mudbox has been rapidly gaining popularity and was acquired by Autodesk, Inc. in 2007, where it has been refined into a powerful competitor to software such as zBrush. In this post, we’ve scoured around the web to find the 30 best Mudbox tutorials. Starting with a quick start guide that consists of Mudbox tutorials for beginners, the tutorials then progress into individual Mudbox effects, and also Mudbox project overviews. If you are interested in more of the best 3D tutorials, check out these posts:

Passing the Hash with Remote Desktop GARD Pro Not Registered Kali Linux contains a large number of very useful tools that are beneficial to information security professionals. One set of such tools belongs to the Pass-the-Hash toolkit, which includes favorites such as pth-winexe among others, already packaged in Kali Linux. An example of easy command line access using pth-winexe is shown below. We constantly strive to include new, useful tools to our repositories. Sometimes we feel that some of these tools do not get the attention they deserve and go under-reported. Computer Graphics Resources For Digital Artists and Designers - Part 3 Howdy everyone and welcome to another enchanting photography showcase! This time we will focus on the grace and beauty given by the details of the butterflies. They can be an interesting subject both for macro and distance shots, depending on their colors and poses. Butterflies are mainly day-flying insects that go through four stages of […] The tropical area on the globe surrounds the Equator, being limited by the tropic of Cancer in the North and the Tropic of Capricorn in the South.

Rooted Warfare 2014 Spain Wrap-up Part 1 ToolsWatch was present at Rooted CON, the most important security conference in Spain to organize the Rooted Warfare, similar to the Black Hat Arsenal edition, allowing auditors, penetration testers and security experts present and show their tools to the community and interact with attendees. This time Rooted CON was held the 6, 7 and 8 March, being 7 and 8 with Rooted Warfare. To me (maxisoler) was amazing stay with the Spanish community, colleagues and friends, while others only knew through Twitter or blogs as Security By Default. During these days were presented 12 amazing tools! We will starting to publish videos and more pictures about it. Schedule

Animation, Concept Art, CG, Computer Graphics, Video Games, VFX, Visual Development, Comics, Illustration, Toys, Entertainment, Galleries, Images, Wallpapers – CGHUB.com Galleries CG-Hub A community for CG professionals Log in or Sign Up! Ray just left a comment for image NOVA the Network Obfuscation and Virtualized Anti-Reconnaissance v12.6 available Tools Published on September 11th, 2012 | by NJ Ouchn The Network Obfuscation and Virtualized Anti-Reconnaissance (Nova) system is an open-source software tool developed to detect network based reconnaissance efforts, to deny the attacker access to real network data while providing false information regarding the number and types of systems connected to the network. In any intrusion, the attacker must first perform reconnaissance to learn all about a network by discovering information such as how many systems are online, what operating systems are installed on them, what services are running on those machines, and what ports may be open.

Home  Gleb Goloubetski was born in 1975 in Omsk, Russia, a Siberian town. His father, who died when Gleb was six, was a merited artist of the Soviet Union, and his grandfather was an architect. His mother currently owns a gallery in Omsk. Gleb's talent was discovered during his early childhood and he began selling his work at the age of 15. He studied at an art academy in St Petersburg, and from 1989 to 1995 continued as a student in the master class of Valerij Kullkov. Gleb spends weeks at a time in Greece, Italy, Egypt, Thailand, Maledives, and Brazil painting interesting houses, flowers, interiors, and the contrast of light and dark.

How To Write Your First Ruby Web Bot In Watir Time for the fun stuff now. The holy grail for a lot of Internet Marketers is automation. This can be obtained through simple iMacros scripts, some PHP scripts on a server, or with a little tool called Watir using the Ruby programming language. All of these combos have their own inherent advantages and disadvantages, but that’s not something I’m going to go over here. I like to use Watir for a lot of botting needs, so that’s what I’m going to show you how to do today. Why Ruby? Popular Photos Notifications See all notifications All categories Installation For up to date installation instructions download Homebrewer’s Guide to Watir book. You can download the book for free. If you buy the book the money goes to Watir project. Visit the following links for having trouble with installation: