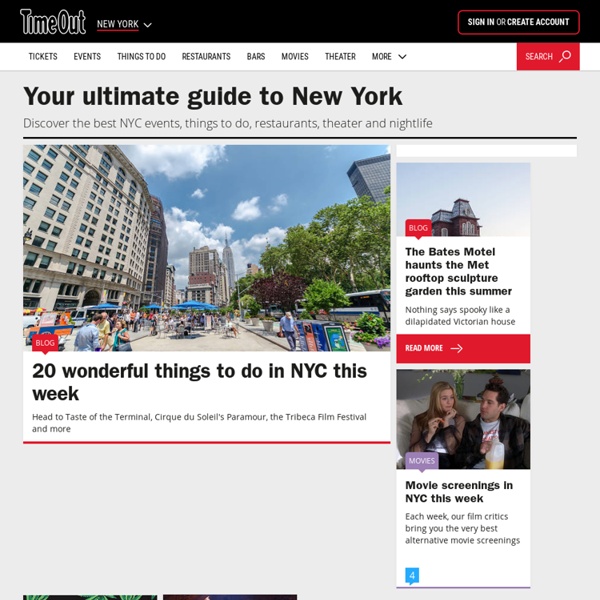 Iran nuke deal quietly collapses Less than a month after it was hailed as “a great diplomatic coup,” the so-called Geneva accord to halt Iran’s nuclear ambitions seems to have come unstuck. The official narrative in Tehran is that Iran signed nothing. “There is no treaty and no pact,” says Foreign Ministry spokeswoman Marzieh Afkham, “only a statement of intent.” Features - Free NYC The amount of free music in New York’s summer months is inspiring…and overwhelming. So, here’s a list. Enjoy. (For helpful overviews, see Cathleen Cueto II’s July NFT tract, “Slummer in the City.”) Features - An Englishwoman in New York It's been ten years since my last visit, and New York suddenly has so much more to offer. At the age of 11 I cried--it didn't quite feel as exciting as the movies and I had picked up head lice on the plane. But I was lucky enough to have a few amazing experiences, including dinner at the Twin Towers. I'll never forget gazing up the side of it and just being so overwhelmed by the view. Now as I travel on the subway for the first time by myself, my biggest fear is being called out as just another tourist getting in the way of the commute for the real New Yorkers. Not that I am anything other than just another tourist.

Dyker Heights Christmas Lights Extravanza To those of you who, like me, have an odd soft spot in your heart for suburban homes dedecked with over the top Christmas decorations (yet have no car), look no further. Let me point you to the Brooklyn neighborhood of Dyker Heights. Dyker Heights sits between Bay Ridge, Bensonhurst, and Gravesend Bay, with a lovely view of the Verrazano Bridge.

Mahmoud Abbas wants One and One-Half State Solution Posted by William A. Jacobson Tuesday, March 11, 2014 at 12:05pm One for Palestinians in West Bank and Gaza, and another half for Palestinians within Israel through a “right of return” The announcement recently by Mahmoud Abbas that the Palestinians never, ever would recognize a Jewish state garnered plenty of headlines. It quickly was followed up by a similar announcement from the Arab League and Fatah party. Watch this speech by Abbas, which led to the headlines, and read the text. New York - City Guidebooks, Maps, Urban Neighborhoods, Travel New York On Our Radar Tea & Sympathy Tea & Sympathy In The West Village by Kari Dimmick The Christmas House In The Bronx [Image via TIME]. The Garabedian family from Pelham Parkway North has been building up their Christmas Display for the past 30 years. Their home is decorated with hundreds of animated figurines and likenesses of "secular saints" such as Nicole Kidman, Audrey Hepburn, and Elizabeth Taylor.

About Hey, remember I’m at the beach! My name is Maggie M. Thornton. I live in Tulsa, Oklahoma in the northeastern portion of the state, which bears no semblance to the days of the Dust Bowl. It is lushly green and hilly here – a beautiful place to live. NYC Guide: 10 amazing ways to spend an afternoon New York is packed with fun things to do, and you can't go wrong with the classic attractions: rowing boats in Central Park, kissing at the top of the Empire State Building, eating oysters at Grand Central. But I'd love to share a few twists on those adventures that we've discovered over the years... 1. Sunset sail. Feel the crisp wind on your face while sailing down the Hudson River on a classic 1890's style Schooner. The captain passes out wool blankets and serves wine, beer and Champagne, and you can bring snacks, if you'd like.