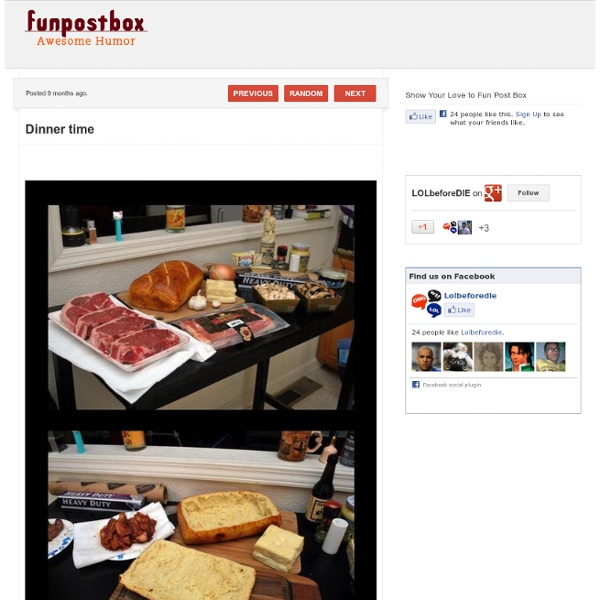 50 Healthy Recipes to Kick Off 2012 Happy New Year! Many of us are thinking about our New Year’s resolutions and healthy eating is often at the top of the list. If you are setting a goal to eat healthy in 2012, here are 50 healthy recipes to help you get started. Beverages Easy Strawberry Mango Smoothie Most Amazing Miniature Food Artworks by Shay Aaron Shay Aaron is a brilliant artist from Israel who makes the most astonishing miniature food jewelry. These foodstuffs look so beautiful that we would desire to eat them. Actually, there’s a whole market out there for miniature food. Not actual stuff you can eat, but beautifully hand made designs of steaks, burgers, pies, vegetables, eggs and pretty much food artworks you can think of. Comments comments 30 Very Funny Books By Gina Barreca, Ph.D. It's a dreary day, so I thought I'd indulge myself and come up with a list of my favorite comedies. A caveat, however: this is not a fancy English-professor-y list of the finest, most exquisitely crafted, most erudite or intellectually sophisticated works on paper in the language. This is a list of the books that make me laugh until my mascara starts to run. These are books to read over your first cup of coffee or just before you go to sleep .

Greek Garlic-Lemon Potatoes Recipe About a month back, a dear reader Sudha asked me for a Potato recipe which is my all time fav. She said she loved roast potatoes and that which makes it often. She asked me if I had a twist to regular roast potatoes. This recipe "Patates sto Fourno" is a Greek recipe for Garlic and Lemon Potatoes. It is a staple in taverna menus and I read that it is usually served with roasted chicken/grilled fish dishes. The potatoes are mostly cubed and browned. Cheesy Chicken, Bacon and Avocado Quesadillas What is it about bacon & avocado that I absolutely love?? And these quesadillas… with their buttery, crispy, heavenly tortilla shells… are seriously yum. Don’t let the green scare ya, avocados have a really delicious taste. I promise they’re not just thrown in to “healthify” this recipe!

Dokkōdō The "Dokkōdō" [ (Japanese: 独行道?); "The Path of Aloneness", "The Way to Go Forth Alone", or "The Way of Walking Alone"] is a short work written by Miyamoto Musashi (宮本 武蔵) a week before he died in 1645. It consists of either nineteen or twenty-one precepts; precepts 4 and 20 are omitted from the former version. "Dokkodo" was largely composed on the occasion of Musashi giving away his possessions in preparation for death, and was dedicated to his favorite disciple, Terao Magonojō (to whom the earlier Go rin no sho [The Book of Five Rings] had also been dedicated), who took them to heart. "Dokkōdō" expresses a stringent, honest, and ascetic view of life.

8 Secrets From the Wonderful World of Disney 1. There Are Human Remains in the Haunted Mansion The Haunted Mansion ride at Disneyland is one of the scariest places in the park, but not for the reasons you’d expect. Creamy Broccoli Cheese Soup by Barb on October 9, 2012 Vegan Broccoli Cheeeeese Soup Whew… what a weekend! As you already know we put our house on the market and it went under contract really fast- faster than we had anticipated. Nutella Cinnamon Rolls May 10, 2011 | Print | E-mail | Filed under bread, nutella There are some days that I just lose my appetite. It might be because of my mood, or that nothing sounds good, or that I’m in a food rut again and need to spice things up a bit. When my appetite comes back though, what I’m inevitably craving is some sort of comfort food. Yesterday happened to be one of those days, and by the end of the day all I could think about was a warm cinnamon roll fresh from the oven. Fortunately, over the weekend I whipped up a batch of my go-to recipe…only this time, I halved the recipe so that I’d only get 3 pans of rolls instead of 6.

Sex Tips to Turn Her On: Mens Health Most bedroom problems boil down to this: Men are microwaves and women are slow cookers. With men, all you have to do is push a few buttons and we"re hotter than a habanero. But with women, it"s an all-day process. You have to buy the ingredients, mix them together, and then put everything in the pot and let it simmer . . . and simmer . . . and simmer. That"s why we"re offering a microwave mentality for the Crock-Pot reality: quick, easy things you can do to make her heating speeds better match yours. tton Candy USB stick turns any flatscreen television into a working computer By Rob Waugh Published: 12:54 GMT, 15 May 2012 | Updated: 13:22 GMT, 15 May 2012 The computer of the future could be a tiny pocket-sized stick that you simply plug into the back of any flatscreen television. The Cotton Candy USB stick turns any television into a fully functioning computer armed with the Android operating system, HD games and word processing via Google Documents. The price for the Cotton Candy hasn't been set yet - but it will be 'well under $200/£125', its makers promise.

33 Cheap Ways to Spice Up Your Rice Whether you use white, brown or yellow rice and whether you cook it in a rice cooker, on the stove or in the microwave, rice is one of the easiest, most frugal things you can cook. There are many reasons why we love rice. It’s pantry friendly and lasts for a long time, it’s easy to make meals out of leftover cooked rice and, best of all, it’s cheap! But eating it plain is not going to satisfy many people for very long.