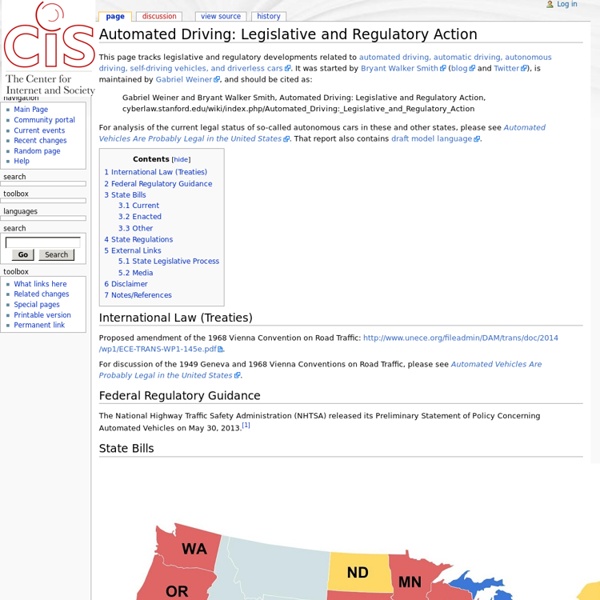 Liability and Regulation of Autonomous Vehicle Technologies Autonomous vehicle technologies and advanced driver-assistance systems have the potential to significantly improve transportation safety and efficiency, and, collectively, they may offer tremendous social, economic, and environmental benefits. As these technologies increasingly perform driving functions, they also create a shift in responsibility for driving from the driver to the vehicle itself. This motivates a new look at liability and regulatory regimes because of the increasing uncertainty about what should happen when the inevitable crash occurs and the implications for the adoption of these technologies. This research is an initial step toward understanding these issues and creating an integrated collection of policies to address them. This report is part of the RAND Corporation external publication series. The RAND Corporation is a nonprofit institution that helps improve policy and decisionmaking through research and analysis.

California Preparing for Self-Driving Cars by 2015 Autonomous vehicles are headed for the commercial market, and they may find their way onto our roadways as early as 2015. But that reality would require a huge rework of today’s operational regulations for personal vehicles -- and the California Department of Motor Vehicles (CA DMV) is moving fast to see that it does in fact become reality. Accounting for the multitude of issues and conflicts with existing regulations is a big job, so the CA DMV is looking to the public for help. On March 11, the department workshopped its regulations at its headquarters in Sacramento, where representatives of industry, advocacy groups and the public met and discussed what the future of autonomous vehicles will look like. The workshop, a recording of which is available on Google+, was attended by Google; automakers like Volkswagen Group, Mercedes and Chrysler; and third-party manufacturers like Garmin and TomTom. And Soriano is well aware that privacy is a main concern.

03-Urmson - aimag2009_urmson.pdf 7 Dead Shopping Malls That Found Surprising Second Lives A Bot in Every Garage and on Every Street Here's an idea on how fast bots are going to roll out and why botageddon in some form is inevitable. Morgan Stanley (with good reason) anticipates that 100% of all of the automobiles sold in the US will be self-driving by 2026. That's only 12 years from now. What's pushing this forward so fast? Driving bots are already do a better job at driving than people do. Based on the data so far, if 90% of the cars on the road were driven by bots, we'd have 14,000 fewer deaths in the US alone from traffic accidents. The reason this is interesting is that even if we restrict our analysis to automobiles alone, it means that there will be millions of bots on the road in a little over a decade. Not only that: Ponder this idea for a while. Is botageddon getting easier to imagine?

Countdown to Mainstreaming of Self-Driving VehiclesThe Eno Center for Transportation BY EVA LERNER-LAMPresidentPalisades Consulting Group, Inc. There is a lot of excitement today about the concept of so-called “self-driving vehicles.” Global management consulting firms and scholarly think tanks are predicting that within the next decade, autonomous vehicles will emerge as one of the world’s most “disruptive technologies,” changing everything from auto ownership and accident rates to land use and transportation infrastructure policies. There is a sense of a countdown to a time when automation will manifest itself in the vehicles navigating our roads just as automation just a few decades ago took over manually operated elevators. Today’s drivers are anxious to see how emerging technologies can help them avoid collisions and possibly even enable them to enjoy in-vehicle texting and entertainment without the “distraction” of driving (Image: Soterea) They are probably right. Parking-assist systems are already offered as options for some vehicles. 2. 3. 4. 5. 6. End Notes

Drone Cargo Ships Will Make the Real World Work Like the Internet | Business Image: Rolls-Royce Holdings Rolls Royce is moving toward a world where a single tap on a smartphone could set a massive cargo ship in motion half a world away. As reported by Bloomberg, the company best known for luxury cars is designing drone cargo ships it says would be cleaner, more efficient, and less expensive than the manned ocean freighters that transport most of the world’s cargo today. These uncaptained vessels could become a key link in a human-free global supply chain of consumer goods The push for drone container ships is part of a much larger effort in the logistics industry to automate the way goods and products move from place to place. In the context of what’s already happening, drone cargo ships almost feel like just another link in a rapidly automating supply chain. But such changes will also be driven by the expectations of consumers themselves as the desire for ever-more-instant gratification mounts.