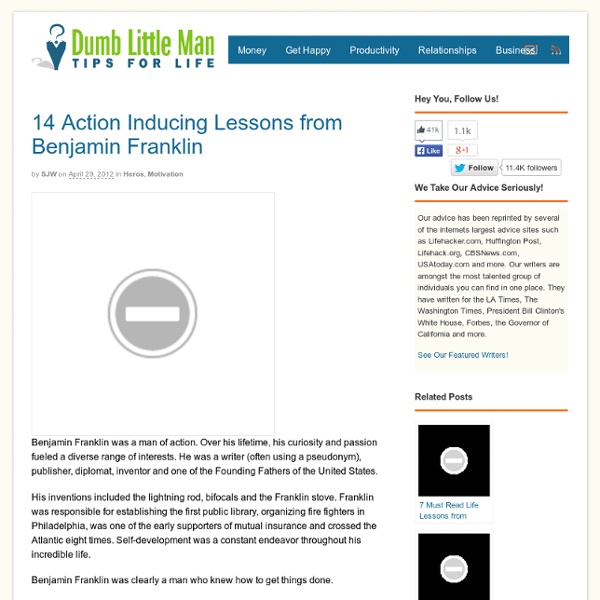 Benjamin Franklin was a man of action. Over his lifetime, his curiosity and passion fueled a diverse range of interests. He was a writer (often using a pseudonym), publisher, diplomat, inventor and one of the Founding Fathers of the United States. His inventions included the lightning rod, bifocals and the Franklin stove. Franklin was responsible for establishing the first public library, organizing fire fighters in Philadelphia, was one of the early supporters of mutual insurance and crossed the Atlantic eight times. Self-development was a constant endeavor throughout his incredible life. Benjamin Franklin was clearly a man who knew how to get things done. 14 Action Inducing LessonsLess Talk, More Action “Well done is better than well said.”Talk is cheap. “Never leave that till tomorrow which you can do today.” This is probably one of the first quotes I remember hearing as a teenager. Be Prepared “By failing to prepare, you are preparing to fail.” You need a plan to accomplish your goals.

When Choosing a Job, Culture Matters - Bill Barnett by Bill Barnett | 4:08 PM May 2, 2012 Some organizations will excite you. They’ll stimulate your success and growth. Others will be stressful. They may lead you to quit before you’ve accomplished much or learned what you hoped to. What Doesn't Motivate Creativity Can Kill It - Teresa Amabile and Steve Kramer by Teresa Amabile and Steve Kramer | 9:49 AM April 25, 2012 Management is widely viewed as a foe of innovation. The thinking goes that too much management strangles innovation (just let a thousand flowers bloom!). But we have found a much more nuanced picture. You really can manage for innovation, but it starts by knowing what drives creativity in the people who generate and develop the new ideas that, when implemented, will become tomorrow’s innovations. Unfortunately, too many managers unintentionally kill innovation because they rely too heavily on carrots and sticks to motivate employees.

Confessions of an Ex-Manager Before I started writing full-time in 2001, I was a corporate manager for a large consumer electronics retailer. I had a large staff, mostly writers and designers plus a few business analysts. Now nearing the 10-year anniversary of my exit from the corporate world, I’ve decided to look back and evaluate how I did as a manager. In some ways, the passion and drive I have to succeed helped me get to a fairly high-ranking position, just one level away from the vice president of a then 50,000-plus employee company. At the same time, I realize now that my disposition and skills were no match for the vagaries of corporate life. Here are a few lessons I learned. 5 Phrases That Can Boost Employee Morale I left the company years ago for another but I still run into former colleagues. Usually the ensuing conversation involves something along the lines of, “Hey, did you hear about the (latest management decision I think is really stupid) at the plant?” This question was different. “You worked there for almost 20 years,” my ex-coworker said.

Nuggets of Storytelling Wisdom Nuggets of Storytelling Wisdom In this post, I return to one of my favourite themes that run through this blog: the importance of storytelling. Past posts on the subject include this one and this one. I recently came across a great TED Talk on storytelling by Andrew Stanton, a director and screenwriter at Pixar whose filmography includes the Toy Story series and Finding Nemo. What is a Hacker? Copyright © 2001 Eric S. Raymond As editor of the Jargon File and author of a few other well-known documents of similar nature, I often get email requests from enthusiastic network newbies asking (in effect) "how can I learn to be a wizardly hacker?". Back in 1996 I noticed that there didn't seem to be any other FAQs or web documents that addressed this vital question, so I started this one. A lot of hackers now consider it definitive, and I suppose that means it is. Still, I don't claim to be the exclusive authority on this topic; if you don't like what you read here, write your own.

The Cost of Bad Project Management When it comes to project management, most organizations put their practices before their people. They place more emphasis on rational factors -- the process itself -- and less on emotional drivers that could lead to project excellence -- like their employees' engagement with the project and company. Large projects, especially those in the IT sectors, have a poor record. But forcing team members to adapt to project management processes and procedures makes it more likely that the project will fail. The resulting cost from bad project management is reaching astronomical levels. It represents a significant waste of money, and it poses a threat to organizations that rely on the success of large-scale projects.

Make a Good Impression in 30 Seconds - Ron Ashkenas by Ron Ashkenas | 12:52 PM February 6, 2012 This post was co-authored with Holly Newman. Here in the U.S., the Super Bowl this weekend showed us the power of 30-second advertisements, and how influential they can be in promoting a company’s awareness. But how often do we craft our own 30-second spots with audiences that we want to influence? 8 Things Really Successful People Do Most people claim to want success. But not everyone is willing to do the hard work and the smart work to get there. Often opportunities present themselves and because people are distracted, they miss them or give up on them before things fully develop. Truly successful people don't leave much to chance. They are disciplined and focused.

The Secret To Creativity, Intelligence, And Scientific Thinking There’s a key difference between knowledge and experience and it’s best described like this: The image is from cartoonist Hugh MacLeod, who came up with such a brilliant way to express a concept that’s often not that easy to grasp. The image makes a clear point—that knowledge alone is not useful unless we can make connections between what we know. Invert, always, invert man muss immer umkehren - Carl Gustav Jacob Jacobi (loosely translated - Invert, always, invert) Today, we will look at one of my favourite mental models called - The Inversion principle. Mental models are a set of simple, abstract but useful principles that help us make sense of the world around us. I came across the Inversion principle on the Farnam Street blog. It is also a favourite of Charlie Munger (Vice Chairman of Berkshire Hathaway and Warren Buffets mate) - "...it is in the nature of things that many hard problems are best solved when they are addressed backward", he pontificates.