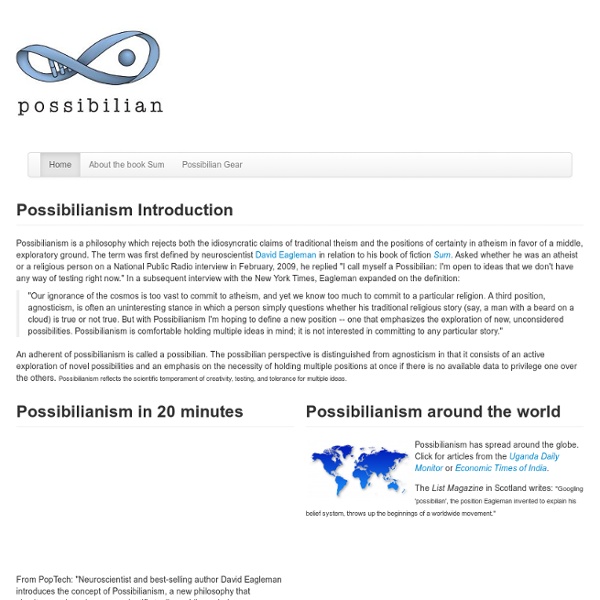 Possibilianism is a philosophy which rejects both the idiosyncratic claims of traditional theism and the positions of certainty in atheism in favor of a middle, exploratory ground. The term was first defined by neuroscientist David Eagleman in relation to his book of fiction . Asked whether he was an atheist or a religious person on a National Public Radio interview in February, 2009, he replied "I call myself a Possibilian: I'm open to ideas that we don't have any way of testing right now." In a subsequent interview with the New York Times, Eagleman expanded on the definition: "Our ignorance of the cosmos is too vast to commit to atheism, and yet we know too much to commit to a particular religion. A third position, agnosticism, is often an uninteresting stance in which a person simply questions whether his traditional religious story (say, a man with a beard on a cloud) is true or not true.

Neuroscience of Music - How Music Enhances Learning - Neuroplasticity Neuroscience research into the neuroscience of music shows that musicians’ brains may be primed to distinguish meaningful sensory information from noise. This ability seems to enhance other cognitive abilities such as learning, language, memory and neuroplasticity of various brain areas. Scientific review of how music training primes nervous system and boosts learning

Six Easy Steps to Avert the Collapse of Civilization ALEXANDER ROSE: Good evening everybody, please take your seats. As some of you know we start these talks off with a long short, a short film that exemplifies long term thinking. This long short is one of the shortest at sixty seconds and probably covers the longest time span at several million years. STEWART BRAND: And for the next four and a half billion years. Is the Internet Warping Our Brains? - Technology Is this a bad thing? Not necessarily, says Sparrow. For instance, for years people in the educational community have known that rote learning—that is, forcing children to memorize facts and dates—is a poor way to educate. If that's the case, allowing computers to do some of the memorizing for us might be a way to focus more on the more philosophical aspects of learning. "Perhaps those who teach in any context, be they college professors, doctors or business leaders, will become increasingly focused on imparting greater understanding of ideas and ways of thinking, and less focused on memorization," Sparrow told Time.

Sexy Cosplay of The Week: Cleavage Corner Advertisement Last week, as you know we did a spotlight on the queen of cosplay Ruby Rocket . We were told “you can’t top the Rocket”. Now, were not the type to back down from a challenge but to be quite honest we agree. I’m sure we could find a super hot babe decked out in a sexy costume but for any cosplayer to follow Ms. Rocket would just be embarrassing. An afternoon nap markedly boosts the brain’s learning capacity If you see a student dozing in the library or a co-worker catching 40 winks in her cubicle, don’t roll your eyes. New research from the University of California, Berkeley, shows that an hour’s nap can dramatically boost and restore your brain power. Indeed, the findings suggest that a biphasic sleep schedule not only refreshes the mind, but can make you smarter. Students who napped (green column) did markedly better in memorizing tests than their no-nap counterparts.

50 Free Android Apps Every College Student Needs Saving money is paramount in college, as most students don’t have a lot of that commodity to throw around. So, you may welcome some free Android apps that can push your productivity, creativity and communication always seem welcome. You may find at least one or two apps you’ll want from this list of 50 free Android apps that every college student needs.

The Brain's Dark Energy Imagine you are almost dozing in a lounge chair outside, with a magazine on your lap. Suddenly, a fly lands on your arm. You grab the magazine and swat at the insect. How To Boot And Install Windows 7 From USB Flash Drive (Updated) Previously, I have discussed the way to create a Windows 7 USB installer drive using the command prompt. Even though I have make it easy to follow, there are still some of you having some difficulty in the process. Recently, I have come across this little cool portable application that is able to do all the things covered in the previous tutorial in a breeze and without the command prompt. The application that I am talking about is WinToFlash. This is a small application (only 2.1MB) that allows you to convert your Windows installer CD/DVD to a bootable USB drive. Not only is it easy to use (nearly idiot-proof and does not require you to have any technical knowledge), it is also fully portable – No installation is required and you can bring it wherever you are.

Brain mechanism recruited to reduce noise during challenging tasks New research reveals a sophisticated brain mechanism that is critical for filtering out irrelevant signals during demanding cognitive tasks. The study, published by Cell Press in the February 26 issue of the journal Neuron, also provides some insight into how disruption of key inhibitory pathways may contribute to schizophrenia. "The ability to keep track of information and one's actions from moment to moment is necessary to accomplish even the simple tasks of everyday life," explains senior study author, Dr. Helen Barbas from Boston University and School of Medicine. "Equally important is the ability to focus on relevant information and ignore noise." Dr.

The Brain-Information about the Brain 1 Introduction “I think, therefore I am.” —René Descartes, 17th-century philosopher 5 Ways To Hack Your Brain Into Awesomeness Much of the brain is still mysterious to modern science, possibly because modern science itself is using brains to analyze it. There are probably secrets the brain simply doesn't want us to know. But by no means should that stop us from tinkering around in there, using somewhat questionable and possibly dangerous techniques to make our brains do what we want. Rewriting the Mind – We Are What We Think - Evolving Beings The conscious mind is the part we are aware of – the part that does the thinking, worrying, planning and creating. It is a tiny part of the structure; it is the subconscious that is the looming bulwark, a massive entity with incredible powers and potentials. Its unique characteristic is that it can create anything that we command it to create, by virtue of the thoughts we think. If you believe that you cannot achieve something, if you believe that you cannot have something, the subconscious will create conditions, so that your beliefs are proved. To transform your life, it is very important that you seek the help of the subconscious. Thus the negative thoughts that create our negative conditioning, can be overthrown by affirming their opposite.

What cannabis actually does to your brain - io9 Chances are they would've ended up brainless morons with or without the pot. It's quite frankly not strong enough of a narcotic to destroy one's life such as you describe. It's very dependent on the user's persona. Rare but Real: People Who Feel, Taste and Hear Color When Ingrid Carey says she feels colors, she does not mean she sees red, or feels blue, or is green with envy. She really does feel them. She can also taste them, and hear them, and smell them. The 20-year-old junior at the University of Maine has synesthesia, a rare neurological condition in which two or more of the senses entwine.

It's exactly the way I feel about the important stuff. A great jumping off point for a workable philosophy. by drszusz May 17