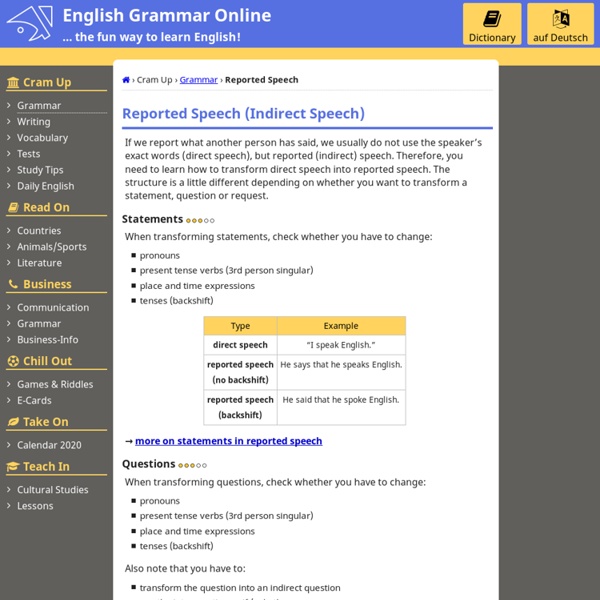 Direct | indirect speech in English If we want to say what other people said, thought or felt, we can use the direct or indirect speech. The direct speech: "I like it," he said. "Irene is late," he thought. If these verbs are in the past tense, we change the following: a) verb tenses and verb forms b) pronouns c) the adverbs of time and place A) Verb tenses We change the tenses in the following way: Present - past "I never understand you," she told me. - She told me she never understood me. As you can see, both the past tense and the present perfect change into the past perfect. Notes 1. The verb forms remain the same in the following cases: If we use the past perfect tense.Eva: "I had never seen him." - Eva claimed that she had never seen him. B) Pronouns We have to change the pronouns to keep the same meaning of a sentence." Sometimes we have to use a noun instead of a pronoun, otherwise the new sentence is confusing." This and these are usually substituted." C) Time and place Here usually becomes there. Reported questions

Random Idea English: Reported speech - lesson and exercises Constructing reported speech involves using a mixture of some basic rules and your common sense. When using the first doesn't sound natural, use the second. The main idea is that it should make sense to the listener. This is a fairly detailed but not exhaustive look at reported speech. I hope to follow it up with some more advanced vocabulary and exercises fairly soon. Click and Drop - Where you see this sign, mouse over for instructions Basic principles Exercise 1 - Convert the direct statements and questions into reported speech. Basic rules In both reported statements and questions verbs usually go one tense back (backshifting)pronouns, possessives and other determiners may have to be changedtime references may have to be made non-time-specificplace references may need to be changed Note These are not fixed rules, but reflect that: Additionally in reported questions in the main question, change question order to statement orderin yes/no questions, add if or whether Patricia isn't here today.

Reporting Verbs for Advanced Level ESL Learners and Classes When using reported speech, most students learn to use "say" and "tell": Examples: John told me he was going to stay late at work. Peter said he wanted to visit his parents that weekend. These forms are perfectly correct for reporting what others have said. For more information on reported speech, this overview of reported speech provides a guide on which transformations are required to use the form. Related Grammar Basic Reported (Indirect) Speech Indirect Speech Transformations Quiz 1 Indirect Speech Transformations Quiz 2 More Grammar Reference

Wh- Question Clauses – Reported / Indirect Speech Restate a question within a clause (reported speech) Quoted Questions vs. Restated Questions Wh-question: Who, What, Where, Why, When and How The main clause (matrix clause) is the independent clause and the subordinate clause (embedded clause) is the dependent clause. In reported speech, no additional punctuation (quotation marks, comma, or question mark) is used. Ask Synonyms ask (V) – request information → My father always asks how I am doing. Also see Said Synonyms. Adjustments Word Order / Person & Number ¹subordinate marker – who, what, where, why, when, how perspective (N) – point of view; how someone relates to surroundings: person (you, i we); place (here, there); time (now, then); direction (coming, going) See deixis. Time / Location ¹subordinate marker– who, what, where, why, when, how ²direction: change coming to going if both speaker and listener do not share a location Adjusting Perspective (deixis) Adjusting Perspective Deictic words Person Deixis Time and Place Deixis Advanced

The Syrian Refugee Crisis Explained Perfectly With a Simple Animation & Video In September 2015, the body of a three-year-old Syrian boy was found floating on the shores of the Mediterranean Sea. Photographs of the boy were quick to get circulated world over, and the world responded with a massive outcry over the Syrian civil war and refugee crisis. This was the first time the Syrian crisis was globally recognised as a burning issue, and one that needs to be addressed with utmost urgency. This video, by In a Nutshell , speaks about how the Syrian crisis is an international issue, and how it all started with countrywide unrest and the civil war in Syria. Apart from the succinct explanation of the overarching issue, the video also explains the role of the neighbouring countries in aiding and giving asylum to refugees in their greatest hour of need. Watch this video to get a better understanding of the larger Syrian issue and learn about what measures we can take to offer help to the affected people. Video created by In a Nutshell .