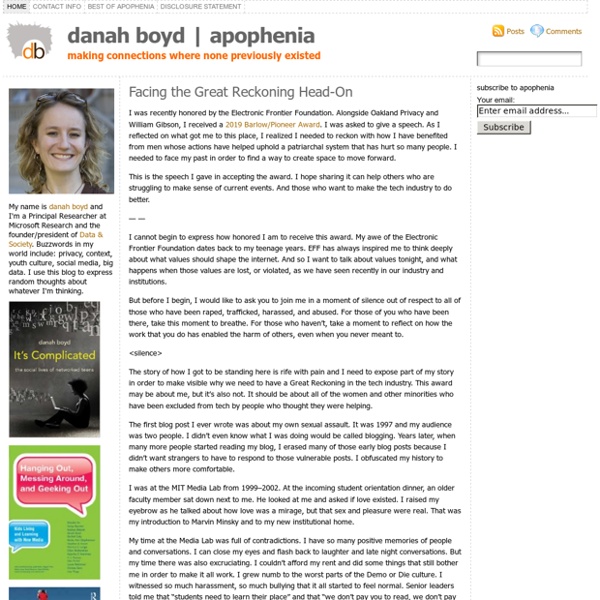 Teens, Social Media, and Privacy Teens, Social Media, and Privacy Teens share a wide range of information about themselves on social media sites; indeed the sites themselves are designed to encourage the sharing of information and the expansion of networks. However, few teens embrace a fully public approach to social media. Instead, they take an array of steps to restrict and prune their profiles, and their patterns of reputation management on social media vary greatly according to their gender and network size.

Thought Meditation - Phakchok Rinpoche on Using Thoughts During Meditation As a small child I was chosen, in a traditional Tibetan fashion, as an incarnation of a highly respected and powerful meditation teacher. When I went to school in the monastery, my professors had big expectations for me. They put a lot of pressure on me to live up to the example of this great master from the past. But rather than rise to the occasion, I, like many teenagers, rebelled against all the expectations and pressure. I just became more and more angry about everything and everyone. Behind my back, the other monks called me the “anger ball,” and when I was in a bad mood everyone tried to get as far away from me as possible. web strategy Expect the Groundswell to continue, in which people connect to each other –rather than institutions. Consumer adoption of social networks is increasing a rapid pace, brands are adopting even during a recession, so expect the space to rapidly innovate to match this trend. Clients can access this report, but to summarize what we found, in the executive summary we state:

Teens, Social Media, and Privacy Overview Teens are sharing more information about themselves on social media sites than they have in the past, but they are also taking a variety of technical and non-technical steps to manage the privacy of that information. Despite taking these privacy-protective actions, teen social media users do not express a high level of concern about third-parties (such as businesses or advertisers) accessing their data; just 9% say they are “very” concerned.

Design-based research This article or chapter is incomplete and its contents need further attention. Some information may be missing or may be wrong, spelling and grammar may have to be improved, use your judgment! 1 Definition FFIEC issues social media guidance:social media channels present privacy compliance challenges If you are using social media to attract and interact with customers, you should review the recent supervisory guidance from the Federal Financial Institutions Examination Council (FFIEC). The guidance, titled “Social Media: Consumer Compliance Risk Management Guidance,” (“Guidance”) was released on December 11, 2013, and was immediately effective. The Guidance applies to all banks, savings associations, and credit unions and to all nonbank entities supervised by the Consumer Financial Protection Bureau (CFPB). Among other things, the Guidance reminds financial institutions that the existing privacy rules have a “particular relevance” in the social media space. The Guidance identifies certain key issues that all financial institutions need to incorporate into their social media compliance programs, including the following: Risk Management

Why is UX so Difficult? Summary: UX practitioners who feel inept at their job usually face far greater challenges than improving their design, craft or research prowess. Rather, addressing development schedules, Agile, Scrum, Lean, and team member’s roles can create the greatest challenges. Collaborative Leadership Practices and Skills The Trust Feedback Loop Leadership starts with you. If you want to build a strong team, the place to start is with a look in the mirror. Your vision for your team arises from your own character, motives and beliefs. How you regard yourself determines the grandeur and scope of your vision.... angel Kyodo williams — The World Is Our Field of Practice Krista Tippett, host: angel Kyodo williams is one of our wisest voices on social evolution and the spiritual aspect of social healing. And for those of us who are not monastics, she says, the world is our field of practice. She’s an esteemed Zen priest and the second black woman ever recognized as a teacher in the Japanese Zen lineage. To sink into conversation with her is to imagine and experience a transformative potential of this moment towards human wholeness. angel Kyodo williams: There is something dying in our society, in our culture, and there’s something dying in us individually. And what is dying, I think, is the willingness to be in denial.

Dehumanizing Always Starts With Language Adapted from Braving the Wilderness (2017) Chapter Four: People Are Hard to Hate Close Up. Move In. When we commit to getting closer, we’re committing to eventually experiencing real, face-to-face conflict. Whether it’s over dinner, at work, or in the grocery line, in-person conflict is always hard and uncomfortable. And when it comes to family—it’s even harder and more painful. Common Ground Cheraton Love & Jim White Cheraton Love identifies as liberal, and her father-in-law, Jim White, identifies as conservative. Cheraton invited Jim to have a conversation at his home in Silver Valley, North Carolina about some of things that are most important to them, and how they don’t let their differences pull their family apart. They recorded their discussion using the StoryCorps App. Listen to their full conversation on the StoryCorps Archive.We’re presenting this conversation through One Small Step, StoryCorps’ new national effort to encourage people to engage in a conversation with someone they may not agree with politically.

The Gut-Wrenching Process of Befriending Ourselves When it comes to addressing the question of technology’s impact on loneliness, it seems people are split. There are so-called techno-utopists and other thinkers who believe that technology is making the world a better place, and specifically that it enables connection across borders and boundaries of various kinds. And certainly, there’s power in organizing through social media, making friends deliberately and inadvertently, through online platforms. I tend to be in this school of thought. When I came back from my first trip to India — when I was 18, and hadn’t yet even been to California — I’d say, “I don’t feel any psychological distance when I think of India.”