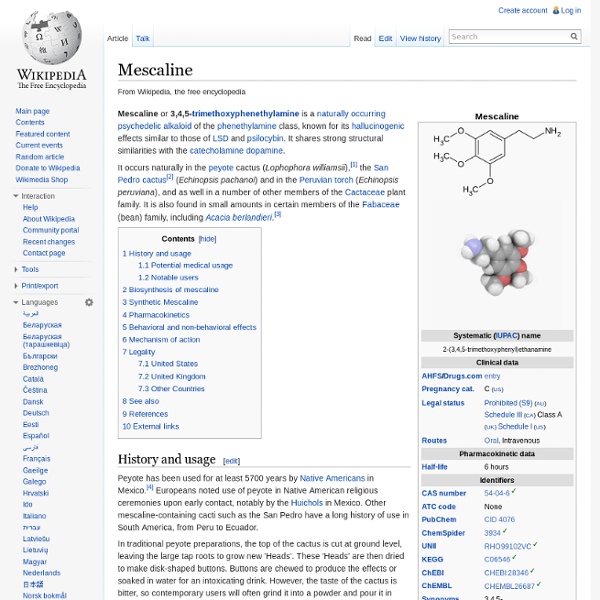 Mescaline or 3,4,5-trimethoxyphenethylamine is a naturally occurring psychedelic alkaloid of the phenethylamine class, known for its hallucinogenic effects similar to those of LSD and psilocybin. It shares strong structural similarities with the catecholamine dopamine. It occurs naturally in the peyote cactus (Lophophora williamsii),[1] the San Pedro cactus[2] (Echinopsis pachanoi) and in the Peruvian torch (Echinopsis peruviana), and as well in a number of other members of the Cactaceae plant family. It is also found in small amounts in certain members of the Fabaceae (bean) family, including Acacia berlandieri.[3] Naturally derived mescaline powder extract. History and usage[edit] Peyote has been used for at least 5700 years by Native Americans in Mexico.[4] Europeans noted use of peyote in Native American religious ceremonies upon early contact, notably by the Huichols in Mexico. Potential medical usage[edit] Notable users[edit] Biosynthesis of mescaline[edit] Synthetic Mescaline[edit]

Ibogaine Ibogaine is a naturally occurring psychoactive substance found in plants in the Apocynaceae family such as Tabernanthe iboga, Voacanga africana and Tabernaemontana undulata. A psychedelic with dissociative properties, the substance is banned in some countries; in other countries it is used by proponents of psychedelic therapy to treat addiction to methadone, heroin, alcohol, cocaine, methamphetamine, anabolic steroids, and other drugs. Ibogaine is also used to treat depression and post traumatic stress disorder. Derivatives of ibogaine that lack the substance's psychedelic properties are under development.[1] Ibogaine-containing preparations are used for medicinal and ritual purposes within African spiritual traditions of the Bwiti, who claim to have learned it from the Pygmy peoples. Although it was first commonly advertised as having anti-addictive properties in 1962 by Howard Lotsof, its western use predates that by at least a century.

Hallucinogen A hallucinogen is a psychoactive agent which can cause hallucinations, perception anomalies, and other substantial subjective changes in thoughts, emotion, and consciousness.The common types of hallucinogens are psychedelics, dissociatives, or deliriants. By contrast, Stimulants, Opioids, and other psychoactive drugs are not explicitly hallucinogens because a 'hallucination' is visual terminology. The psychoactivity of opioids is devoid of visual anomalies, though the 'numbing' can be considered dissociation from pain. Hallucinations are not an uncommon symptom of amphetamine psychosis, but as they are not a primary effect of the drugs themselves. While stimulants do not induce hallucinations without abuse, the nature of stimulant psychosis is not unlike delirium.

Psilocybin Psilocybin[nb 1] (/ˌsɪləˈsaɪbɪn/ SIL-ə-SY-bin) is a naturally occurring psychedelic compound produced by more than 200 species of mushrooms, collectively known as psilocybin mushrooms. The most potent are members of the genus Psilocybe, such as P. azurescens, P. semilanceata, and P. cyanescens, but psilocybin has also been isolated from about a dozen other genera. As a prodrug, psilocybin is quickly converted by the body to psilocin, which has mind-altering effects similar (in some aspects) to those of LSD, mescaline, and DMT. In general, the effects include euphoria, visual and mental hallucinations, changes in perception, a distorted sense of time, and spiritual experiences, and can include possible adverse reactions such as nausea and panic attacks. History[edit]

Nicotine In smaller doses (an average cigarette yields about 1 mg of absorbed nicotine), the substance acts as a stimulant in mammals, while high amounts (50–100 mg) can be harmful.[5][6][7] This stimulant effect is likely to be a major contributing factor to the dependence-forming properties of tobacco smoking, nicotine patches, nicotine gum, nicotine inhalers and liquid nicotine vaporizers.[citation needed] According to the American Heart Association, nicotine addiction has historically been one of the hardest addictions to break, while the pharmacological and behavioral characteristics that determine nicotine addiction are similar to those determining addiction to heroin and cocaine. The nicotine content of popular American-brand cigarettes has slowly increased over the years, and one study found that there was an average increase of 1.78% per year between the years of 1998 and 2005. This was found for all major market categories of cigarettes.[8]

Concord Prison Experiment The Concord Prison Experiment was designed to evaluate whether the experiences produced by the psychoactive drug psilocybin, derived from psilocybin mushrooms, combined with psychotherapy, could inspire prisoners to leave their antisocial lifestyles behind once they were released. How well it worked was to be judged by comparing the recidivism rate of subjects who received psilocybin with the average for other Concord inmates. Staff[edit] The experiment was conducted between 1961–1963 in Concord State Prison, a maximum-security prison for young offenders, in Concord, MA by a team of Harvard University researchers under the direction of Timothy Leary, which included Michael Hollingshead, Dr. Allan Cohen, Dr.

Yuremamine Yuremamine is a phytoindole alkaloid which was isolated and identified from the bark of Mimosa tenuiflora in 2005.[1] As a pure compound, yuremamine is a purple amorphous solid. It represents an entirely new family of indole derivatives. Jump up ^ Vepsäläinen, J. Tribe There are an estimated one hundred and fifty million tribal individuals worldwide,[2] constituting around forty percent of indigenous individuals. Although nearly all tribal people are indigenous, some are not indigenous to the areas where they now live. The distinction between tribal and indigenous is important because tribal peoples have a special status acknowledged in international law. They often face particular issues in addition to those faced by the wider category of indigenous peoples. Many people used the term "tribal society" to refer to societies organized largely on the basis of social, especially familial, descent groups (see clan and kinship). A customary tribe in these terms is a face-to-face community, relatively bound by kinship relations, reciprocal exchange, and strong ties to place.[3]

Dimethyltryptamine History[edit] Another historical milestone is the discovery of DMT in plants frequently used by Amazonian natives as additive to the vine Banisteriopsis caapi to make ayahuasca decoctions. Biosynthesis[edit] Biosynthetic pathway for N,N-dimethyltryptamine