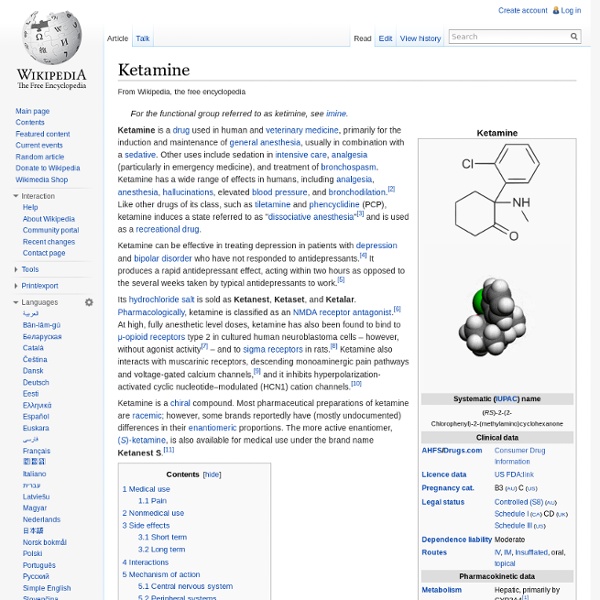 Phencyclidine In chemical structure, PCP is an arylcyclohexylamine derivative, and, in pharmacology, it is a member of the family of dissociative anesthetics. PCP works primarily as an NMDA receptor antagonist, which blocks the activity of the NMDA receptor and, like most antiglutamatergic hallucinogens, is significantly more dangerous than other categories of hallucinogens.[1][2] Other NMDA receptor antagonists include ketamine, tiletamine, dextromethorphan and nitrous oxide. As a recreational drug, PCP may be ingested, smoked, inhaled or injected.[3] Biochemistry and pharmacology[edit] Pharmacodynamics[edit] PCP is well known for its primary action on ionotropic glutamate receptors, such as the NMDA receptor in rats and in rat brain homogenate.[4][5] As such, PCP is an NMDA receptor antagonist. Research also indicates that PCP inhibits nicotinic acetylcholine (nACh) receptors. Studies on rats indicate that PCP indirectly interacts with endorphin and enkephalin receptors to produce analgesia. [11] Notes

MDMA MDMA (3,4-methylenedioxy-N-methylamphetamine) is an empathogenic drug of the phenethylamine and amphetamine classes of drugs. MDMA has become widely known as "ecstasy" (shortened to "E", "X", or "XTC"), usually referring to its street form, although this term may also include the presence of possible adulterants. The UK term "Mandy" and the US term "Molly" colloquially refer to MDMA that is relatively free of adulterants.[3] MDMA can induce euphoria, a sense of intimacy with others, diminished anxiety, and mild psychedelia. Regulatory authorities in several locations around the world have approved scientific studies administering MDMA to humans to examine its therapeutic potential and its effects.[9] Medical use[edit] In the year 2000, Doctor Jose Carlos Bouso performed the first clinical trial of MDMA for use in treating Post Traumatic Stress Disorder.[16] Since 2009, two randomized, controlled trials of MDMA-assisted psychotherapy for post-traumatic stress disorder were published.

Gacyclidine Gacyclidine[1] (GK-11)[2] is a psychoactive drug which acts as a dissociative via functioning as a non-competitive NMDA receptor antagonist. It is closely related to phencyclidine (PCP), and specifically, is a derivative of tenocyclidine (TCP).[3][4] Synthesis[edit] The condensation of 2-methylcyclohexanone (I) with 2-thienyllithium (II) or 2-thienylmagnesium bromide (III) gives cyclohexanol (IV) as a diastereomeric mixture, which was treated with sodium azide (NaN3) in trichloroacetic acid to yield the azide (V). The reduction of (V) with lithium aluminium hydride (LiAlH4) or Raney nickel in isopropanol affords the corresponding amine (VI), preferentially with the cis-configuration. Finally, this compound is condensed with 1,5-dibromopentane (VII) by means of potassium carbonate (K2CO3) in acetonitrile to provide the target compound as a diastereomeric mixture.[5] See also[edit] Arylcyclohexylamine References[edit]

Self-Help Articles The Four Steps for OCD Dr. Jeffrey Schwartz, author of the book Brain Lock, describes the critical four steps for self-treatment of OCD. The idea of self-treatment as part of a behavioral therapy approach is a major advance. Mindfulness and the Treatment of OCD Mental training can be very effective in helping people with OCD change not only their functioning and the clinical course of the disorder, but also the brain itself. In the News Also of Interest Research Articles and Reviews (this site) Announcements & Upcoming Events Dr. Dr. New Partial Intensive Outpatient Program to Launch Soon We will soon launch a new Partial Intensive Outpatient program. Watch the Full Episode of MTV True Life Series "I Hate My Face" featuring Dr.

Morphine Morphine (INN) (/ˈmɔrfiːn/) (sold under nearly a hundred trade names) is an opioid analgesic drug, and the main psychoactive chemical in opium. In clinical medicine, morphine is regarded as the gold standard of analgesics used to relieve intense pain. Like other opioids, such as oxycodone, hydromorphone, and diacetylmorphine (heroin), morphine acts directly on the central nervous system (CNS) to relieve pain. Morphine has a high potential for addiction; tolerance and psychological dependence develop rapidly, although physiological dependence may take several months to develop. Tolerance to respiratory depression and euphoria develops more rapidly than tolerance to analgesia, and many chronic pain patients are therefore maintained on a stable dose for years. Morphine is the most abundant opiate found in opium, the dried latex from unripe seedpods of Papaver somniferum (the opium poppy). Medical uses[edit] Morphine is primarily used to treat both acute and chronic severe pain.

Mirtazapine Mirtazapine (brand names: Avanza, Axit, Mirtaz, Mirtazon, Remeron, Zispin)[6] is a noradrenergic and specific serotonergic antidepressant (NaSSA) introduced by Organon International in the United States in 1996,[2] and is used primarily in the treatment of depression. It is also commonly used as an anxiolytic, hypnotic, antiemetic, and appetite stimulant. In structure, mirtazapine can also be classified as a tetracyclic antidepressant (TeCA) and is the 6-aza analogue of mianserin.[6] It is also racemic - occurs as a combination of both R and S-stereoisomers.[6] Its patent expired in 2004, so generic versions are available.[7] §Medical uses[edit] §Approved and off-label[edit] Mirtazapine's primary use is the treatment of major depressive disorder and other mood disorders.[8][9] However, it has also been found useful in alleviating the following conditions and may be prescribed off-label for their treatment: §Investigational[edit] §Feline[edit] §Efficacy and tolerability[edit] §[edit] Headache

Methoxetamine Methoxetamine (MXE), or 3-MeO-2-Oxo-PCE is a chemical of the arylcyclohexylamine class which has been sold as a designer drug.[2][1] It is a derivative of ketamine that also contains structural features of eticyclidine and 3-MeO-PCP. Methoxetamine has been shown to act as an NMDA receptor antagonist and serotonin reuptake inhibitor.[3] Methoxetamine differs from many other dissociative anesthetics of the arylcyclohexylamine class in that it was designed for grey market distribution.[4] Methoxetamine is a product of rational drug design: its N-ethyl group was chosen to increase potency.[4] Physical properties[edit] Pure methoxetamine hydrochloride is a white powder.[5][unreliable source?] It has low solubility in isopropanol, 6 mg/mL at -10 °C.[6][unreliable source?] It is soluble in ethanol up to 10 mg/ml at 25°C.[7] Emergence[edit] Effects[edit] It is thought that methoxetamine may be an effective, fast-acting antidepressant like other NMDA antagonists. Legal status[edit] Detection[edit]

CrowdMed, Online Medical Diagnosis, Differential Diagnosis Thujone Thujone ( i/ˈθuːdʒoʊn/[1]) is a ketone and a monoterpene that occurs naturally in two diastereomeric forms: (−)-α-thujone and (+)-β-thujone.[2][3] It has a menthol odor. Even though it is best known as a chemical compound in the spirit absinthe, recent studies reveal that absinthe contains only small quantities of thujone, and therefore it is unlikely that thujone is responsible for absinthe's alleged psychedelic effects. Thujone acts on GABA and 5-HT3 receptors[4] in the brain. In addition to the naturally occurring (−)-α-thujone and (+)-β-thujone, there are two other enantiomeric forms possible; (+)-α-thujone and (−)-β-thujone: Sources[edit] Pharmacology[edit] Research grade thujone A toxicology study in mice of alpha-thujone, the more active of the two isomers, found that the median lethal dose, or LD50, is around 45 mg/kg, with 0% mortality rate at 30 mg/kg and 100% at 60 mg/kg. Thujone has been reported to have pain blocking activity. Thujone in absinthe[edit] History[edit] Canada[edit]

Cocaine Cocaine (INN) (benzoylmethylecgonine, an ecgonine derivative) is a crystalline tropane alkaloid that is obtained from the leaves of the coca plant.[5] The name comes from "coca" and the alkaloid suffix "-ine", forming "cocaine". It is a stimulant, an appetite suppressant, and a nonspecific voltage gated sodium channel blocker, which in turn causes it to produce anaesthesia at low doses. Biologically, cocaine acts as a serotonin–norepinephrine–dopamine reuptake inhibitor, also known as a triple reuptake inhibitor (TRI). It is addictive due to its effect on the mesolimbic reward pathway.[6] It is markedly more dangerous than other CNS stimulants, including the entire amphetamine drug class,[7] at high doses due to its effect on sodium channels, as blockade of Nav1.5 can cause sudden cardiac death. Unlike most molecules, cocaine has pockets[clarification needed] with both high hydrophilic and lipophilic efficiency, violating the rule of hydrophilic-lipophilic balance. Medical effects Acute

Eticyclidine Eticyclidine (PCE, CI-400) is a dissociative anesthetic drug with hallucinogenic effects. It is similar in effects to phencyclidine but is slightly more potent. PCE was developed by Parke-Davis in the 1970s and evaluated for anesthetic potential under the code name CI-400,[1] but research into PCE was not continued after the development of ketamine, a similar drug with more favourable properties.[2] PCE is slightly more potent than PCP and has similar effects, but its unpleasant taste and tendency to cause nausea made it less accepted by users.[3] Due to its similarity in effects to PCP, PCE was placed into the Schedule 1 list of illegal drugs in the 1970s, although it was only briefly abused in the 1970s and 1980s and is now little known. See also[edit] References[edit] Jump up ^ LEVY L, CAMERON DE, AITKEN RC (March 1960).

Chronic Illness Survey - 2016 - Paradigm Change The Chronic Illness Survey is a research project designed to gather information about those who suffer from chronic multisymptom illness, such as ME/CFS, fibromyalgia, toxic mold illness, chronic Lyme, CIRS, MCS, POTS, MS, autism and other similar diseases. A main goal is to look at reproductive issues that people with this sort of illness have faced, with regard to fertility as well as the health of any children that that they have had. The survey also includes questions on risk factors for acquiring the illness as well as other topics. How Do I Take The Survey? The survey is available online through Survey Gizmo at the following address: Am I Qualified To Participate? Anyone with any kind of chronic multisymptom illness and who is age 18 or over is welcome to participate. When Is The Deadline For Responses? Our current plan is to collect all responses by July 30, 2016. Who is the Sponsor? How Long Does The Survey Take? Best regards,