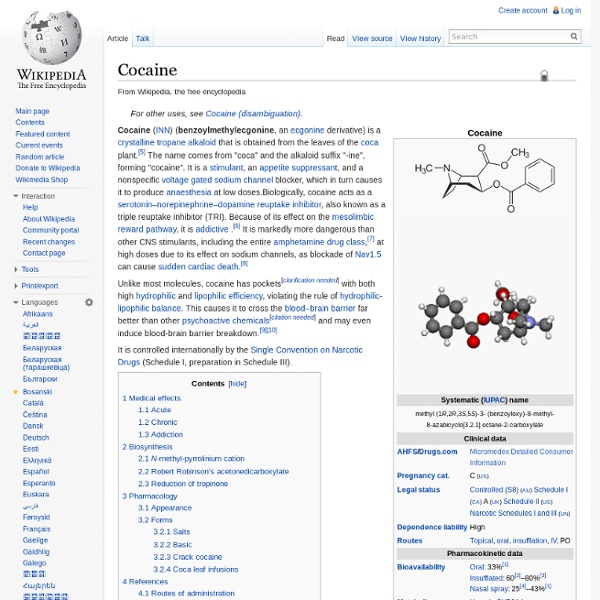 Cocaine (INN) (benzoylmethylecgonine, an ecgonine derivative) is a crystalline tropane alkaloid that is obtained from the leaves of the coca plant.[5] The name comes from "coca" and the alkaloid suffix "-ine", forming "cocaine". It is a stimulant, an appetite suppressant, and a nonspecific voltage gated sodium channel blocker, which in turn causes it to produce anaesthesia at low doses. Biologically, cocaine acts as a serotonin–norepinephrine–dopamine reuptake inhibitor, also known as a triple reuptake inhibitor (TRI). It is addictive due to its effect on the mesolimbic reward pathway.[6] It is markedly more dangerous than other CNS stimulants, including the entire amphetamine drug class,[7] at high doses due to its effect on sodium channels, as blockade of Nav1.5 can cause sudden cardiac death. Unlike most molecules, cocaine has pockets[clarification needed] with both high hydrophilic and lipophilic efficiency, violating the rule of hydrophilic-lipophilic balance. Medical effects Acute Related:  Psychoactive Alkaloids • psychostimulants

Piracetam Piracetam (sold under many brand names) is a medication in the racetams group, with chemical name 2-oxo-1-pyrrolidine acetamide. It is approved in the United Kingdom[2] but is not approved in the United States.[3][4] In the UK, piracetam is prescribed mainly for myoclonus,[5] but is used off-label for other conditions. Evidence to support its use for many conditions is unclear, although it is marketed as a nootropic (cognitive enhancer). Studies of piracetam's cognitive effects have had equivocal results, sometimes showing modest benefits in specific populations and sometimes showing minimal or no benefit.[6] It shares the same 2-oxo-pyrrolidone base structure with pyroglutamic acid. Medical uses[edit] Dementia[edit] Depression and anxiety[edit] Some sources suggest that piracetam's overall effect on lowering depression and anxiety is higher than on improving memory.[12] However, depression is reported to be an occasional adverse effect of piracetam.[13] Other[edit] Anti-vasospasm[edit]

Crack cocaine Crack cocaine ‘rocks’. Appearance and characteristics In purer forms, crack rocks appear as off-white nuggets with jagged edges,[3] with a slightly higher density than candle wax. Purer forms of crack resemble a hard brittle plastic, in crystalline form[3] (snaps when broken). Crack cocaine as sold on the streets may be adulterated or "cut" with other substances mimicking the appearance of crack cocaine to increase bulk. Chemistry In order for cocaine (in plastic bag at bottom) to be converted to crack, several supplies are needed. A close up of the "cooking" process that creates crack. Sodium bicarbonate (NaHCO3, common baking soda) is a base used in preparation of crack, although other weak bases may substitute for it. Coc-H+Cl− + NaHCO3 → Coc + H2O + CO2 + NaCl With Ammonium bicarbonate: Coc-H+Cl− + NH4HCO3 → Coc + NH4Cl + CO2 + H2O With Ammonium carbonate: 2(Coc-H+Cl−) + (NH4)2CO3 → 2 Coc + 2 NH4Cl + CO2 + H2O Psychological effects Physiological effects Addiction Health issues Crack lung Canada

MDMA MDMA (3,4-methylenedioxy-N-methylamphetamine) is an empathogenic drug of the phenethylamine and amphetamine classes of drugs. MDMA has become widely known as "ecstasy" (shortened to "E", "X", or "XTC"), usually referring to its street form, although this term may also include the presence of possible adulterants. The UK term "Mandy" and the US term "Molly" colloquially refer to MDMA that is relatively free of adulterants.[3] MDMA can induce euphoria, a sense of intimacy with others, diminished anxiety, and mild psychedelia. Regulatory authorities in several locations around the world have approved scientific studies administering MDMA to humans to examine its therapeutic potential and its effects.[9] Medical use[edit] In the year 2000, Doctor Jose Carlos Bouso performed the first clinical trial of MDMA for use in treating Post Traumatic Stress Disorder.[16] Since 2009, two randomized, controlled trials of MDMA-assisted psychotherapy for post-traumatic stress disorder were published.

Arecoline Arecoline (/əˈrɛkəliːn/) is an alkaloid found in the areca nut, the fruit of the areca palm (Areca catechu).[1] It is an odourless oily liquid. Chemistry[edit] Arecoline is a strong base, with pKa ~ 6.8.[2] Arecoline is volatile in steam, miscible with most organic solvents and water, but extractable from the latter by ether in presence of dissolved salts. Being basic, arecoline forms salts with acids. The salts are crystalline, but usually deliquescent: the hydrochloride, arecoline•HCl, forms needles, m.p. 158°C;[2] the hydrobromide, arecoline•HBr, forms slender prisms, mp. 177-179 °C from hot alcohol; the aurichloride, arecoline•HAuCl4, is an oil, but the platinichloride, arecoline2•H2PtCl6, mp. 176 °C, crystallizes from water in orange-red rhombohedrons. Biological Action[edit] LD50: 100 mg/kg, administered subcutaneously in mouse.[2] Uses[edit] Owing to its muscarinic and nicotinic agonist properties, arecoline has shown improvement in the learning ability of healthy volunteers.

Caffeine Caffeine is a central nervous system (CNS) stimulant of the methylxanthine class.[10] It is the world's most widely consumed psychoactive drug. Unlike many other psychoactive substances, it is legal and unregulated in nearly all parts of the world. There are several known mechanisms of action to explain the effects of caffeine. The most prominent is that it reversibly blocks the action of adenosine on its receptor and consequently prevents the onset of drowsiness induced by adenosine. Caffeine also stimulates certain portions of the autonomic nervous system. Caffeine is a bitter, white crystalline purine, a methylxanthine alkaloid, and is chemically related to the adenine and guanine bases of deoxyribonucleic acid (DNA) and ribonucleic acid (RNA). Caffeine can have both positive and negative health effects. Caffeine is classified by the Food and Drug Administration as "generally recognized as safe" (GRAS). Uses Medical Caffeine is used in: Enhancing performance Specific populations Children

Adderall While concerns have been raised over side effects and rare, serious complications, Adderall is generally well-tolerated and effective.[3] The most common side effects are cardiovascular, such as fast or irregular heartbeat, and psychological, such as anxiety. Adderall is a common drug of abuse.[citation needed] However, abuse or dependence is very unlikely to develop in those who use it as prescribed.[citation needed] Uses[edit] Medical[edit] Adderall is generally used for the treatment of ADHD and narcolepsy, the two conditions for which the United States Food and Drug Administration has approved its use.[4] However, it is sometimes prescribed off-label for other conditions such as depression. Dosing and administration[edit] Performance-enhancing[edit] Recreational[edit] Side effects[edit] Physical Psychological Overdose[edit] Dependence, addiction, and withdrawal

Nuciferine References[edit] Jump up ^ Bhattacharya SK, Bose R, Ghosh P, Tripathi VJ, Ray AB, Dasgupta B (Sep 1978). "Psychopharmacological studies on (—)-nuciferine and its Hofmann degradation product atherosperminine". Psychopharmacology (Berl.) 59 (1): 29–33. doi:10.1007/BF00428026. See also[edit] Theobromine Theobromine, formerly known as xantheose,[1] is a bitter alkaloid of the cacao plant, with the chemical formula C7H8N4O2. It is found in chocolate, as well as in a number of other foods, including the leaves of the tea plant, and the kola (or cola) nut. It is classified as a xanthine alkaloid,[2] which also includes the similar compounds theophylline and caffeine.[1] The compounds differ in their degree of methylation. Theobromine is a slightly water-soluble (330 mg/L[5]), crystalline, bitter powder. Theobromine was first discovered in 1841[8] in cacao beans by Russian chemist Alexander Voskresensky.[9] Theobromine was first synthesized from xanthine by Hermann Emil Fischer.[10][11] Sources[edit] A chocolate bar and melted chocolate. Theobromine is the primary alkaloid found in cocoa and chocolate. The plant species with the largest amounts of theobromine are:[17] The mean theobromine concentrations in cocoa and carob products are:[18] Biosynthesis[edit] Therapeutic uses[edit] Effects[edit]