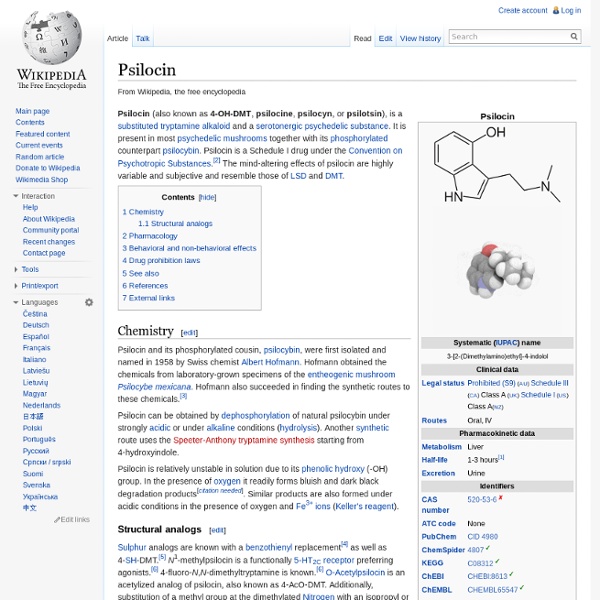 Psilocin (also known as 4-OH-DMT, psilocine, psilocyn, or psilotsin), is a substituted tryptamine alkaloid and a serotonergic psychedelic substance. It is present in most psychedelic mushrooms together with its phosphorylated counterpart psilocybin. Psilocin is a Schedule I drug under the Convention on Psychotropic Substances.[2] The mind-altering effects of psilocin are highly variable and subjective and resemble those of LSD and DMT. Chemistry[edit] Psilocin and its phosphorylated cousin, psilocybin, were first isolated and named in 1958 by Swiss chemist Albert Hofmann. Hofmann obtained the chemicals from laboratory-grown specimens of the entheogenic mushroom Psilocybe mexicana. Psilocin is relatively unstable in solution due to its phenolic hydroxy (-OH) group. Structural analogs[edit] Pharmacology[edit] Psilocin is the pharmacologically active agent in the body after ingestion of psilocybin or some species of psychedelic mushrooms. Psilocin's half-life ranges from 1 to 3 hours.[1]

Tryptophan Tryptophan (IUPAC-IUBMB abbreviation: Trp or W; IUPAC abbreviation: L-Trp or D-Trp; sold for medical use as Tryptan)[2] is one of the 22 standard amino acids and an essential amino acid in the human diet, as demonstrated by its growth effects on rats. It is encoded in the standard genetic code as the codon UGG. Only the L-stereoisomer of tryptophan is used in structural or enzyme proteins, but the R -stereoisomer is occasionally found in naturally produced peptides (for example, the marine venom peptide contryphan).[3] The distinguishing structural characteristic of tryptophan is that it contains an indole functional group. Isolation[edit] The isolation of tryptophan was first reported by Frederick Hopkins in 1901[4] through hydrolysis of casein.

Dissociative Classes of dissociatives[edit] NMDA receptor antagonists[edit] κ-opioid receptor agonists[edit] Effects[edit] The effects of dissociatives can include sensory dissociation, hallucinations, mania, catalepsy, analgesia and amnesia.[9][10][11] The characteristic features of dissociative anesthesia were described as catalepsy, amnesia and analgesia.[9] According to Pender (1972), "the state has been designated as dissociative anesthesia since the patient truly seems disassociated from his environment. 5-MeO-DMT 5-MeO-DMT (5-methoxy-N,N-dimethyltryptamine) is a powerful psychedelic tryptamine. It is found in a wide variety of plant and psychoactive toad species and, like its close relatives DMT and bufotenin (5-HO-DMT), it has been used as an entheogen by South American shamans for thousands of years.[citation needed]

Online Books : "TIHKAL" - #18 4-HO-DMT SYNTHESIS : To a solution of 0.50 g 4-acetoxyindole (see preparation in the recipe for 4-HO-DET) in 4 mL Et2O, that was stirred and cooled with an external ice bath, there was added, dropwise, a solution of 0.5 mL oxalyl chloride in 3 mL anhydrous Et2O. Stirring was continued for 0.5 h and the intermediate indoleglyoxylchloride separated as a yellow crystalline solid but it was not isolated. There was then added, dropwise, a 40% solution of dimethylamine in Et2O until the pH came to 8-9. N-Methyltryptamine N-Methyltryptamine (NMT), or methyltryptamine, is a member of the tryptamine chemical class. It is an alkaloid, probably derived from L-tryptophan, that has been found in the bark, shoots and leaves of several plant species, including Virola, Acacia, Mimosa and Desmanthus often together with the related compounds N,N-dimethyltryptamine (DMT) and 5-methoxy-N,N-dimethyltryptamine (5-MeO-DMT).[1] It is also synthesized in the human body as a metabolic endproduct of the amino acid L-tryptophan.[2] It was found to be a natural trace component in human urine.[3] NMT has been shown to act as an agonist of the TAAR1, similarly to its relatives tryptamine and N,N-dimethyltryptamine.[7]

NMDA receptor antagonist Ketamine, one of the most common NMDA receptor antagonists. NMDA receptor antagonists are a class of anesthetics that work to antagonize, or inhibit the action of, the N-Methyl-D-aspartate receptor (NMDAR). They are used as anesthetics for animals and for humans; the state of anesthesia they induce is referred to as dissociative anesthesia. Myristicin Myristicin is a phenylpropene, a natural organic compound present in small amounts in the essential oil of nutmeg and to a lesser extent in other spices such as parsley and dill. It is insoluble in water, but soluble in ethanol and acetone.[1] Uses[edit] Nutmeg has psychoactive properties at doses much higher than used in cooking.

Psilocybin Psilocybin is Schedule I in the United States. This means it is illegal to manufacture, buy, possess, or distribute without a DEA license. Not available by prescription.