A Complete Guide to 'Hipster Racism' 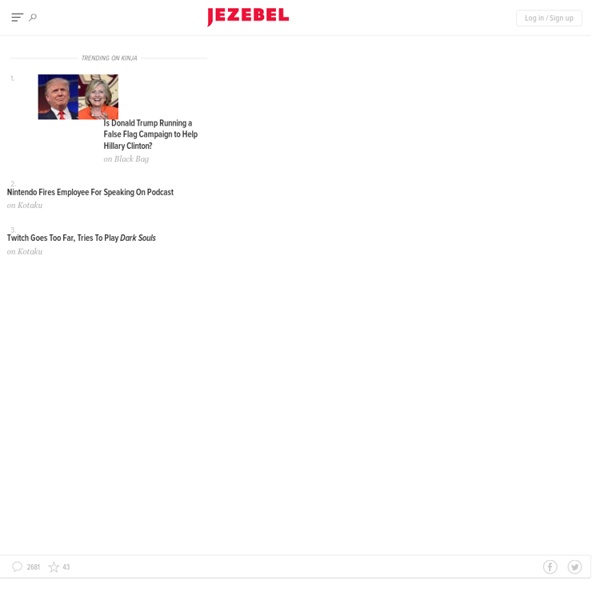 Space Law: Is Asteroid Mining Legal? Can a private company claim ownership of an asteroid based on sending a probe out to it? Can it at least get exclusive mining rights? Would it own the gold, platinum or other materials mined from the asteroid? Last week, a new private company, Planetary Resources announced an ambitious plan to prospect for and eventually mine near-Earth asteroids.

What is femme anyway? Roland Torpor, "Les Masochistes" I’ve been feeling like maybe I should talk about how femme feels (for me at least.) I’ve no doubt that the way I relate to being femme will be forever changing, & I’m positive that other femmes would describe this term differently, but that’s just fine, too. 5 Ways White Feminists Can Address Our Own Racism Last month, the hashtag #SolidarityIsForWhiteWomen erupted on Twitter. Started by Mikki Kendall, it immediately became a channel for women of color to call out how implicit racial bias, double standards for women of different races and overt racism are all baked into mainstream white feminism. If you've been following feminism for the past 150 years, you probably weren't surprised by the range of grievances.

The Science of Why Cops Shoot Young Black Men I went to NYU to learn what psychologists could tell me about racial prejudice in the wake of the shooting of a black teenager, Michael Brown, by a white police officer, Darren Wilson, in Ferguson, Missouri. We may never really know the exact sequence of events and assumptions that led to the moment when Brown, unarmed and, according to witnesses, with his hands in the air, was shot multiple times. But the incident is the latest embodiment of America's racial paradox: On the one hand, overt expressions of prejudice have grown markedly less common than they were in the Archie Bunker era.

Saturday Morning Breakfast Cereal February 18, 2010 Pow! Man, I don't know if this one even makes sense anymore... and that's usually a good sign or a very bad sign. 10 Most Unstoppable Women Ever Presented by MOTRIN®, written by Autostraddle, in the spirit of celebrating unstoppable women everywhere. Sometimes it’s hard to get out of bed, right? And other times it’s hard to push through that last mile, or take that personal or professional risk, or stay up to finish that project. You need an extra push to get you over that difficulty-bump. Maybe it’s coffee, or a personal mantra. The Top 10 Most Racist/Privileged Things White Feminists Did in 2013 In honor of the #stopblamingwhitewomenweneedunity hashtag (started via this Huffington Post article penned by the delightfully clueless Adele Wilde-Blavatsky) I’ve decided to put together a top ten honoring the many interesting methods white feminists employed this year to promote unity between themselves and feminists of color. From refusing to defend feminists of color against attacks from the patriarchy (or from other white feminists for that matter), to deriding feminists of color for not being feminist enough, to blaming feminists of color’s oppressions on their own cultures (instead of, you know, patriarchy) white feminists sure have a funny way of expressing their desire for unity with feminists of color. 10. 9.

Chris Rock: It's not black people who have progressed. It's white people. In New York magazine's November 2014 interview with Chris Rock, writer Frank Rich asked the comedian about issues ranging from the protests in Ferguson, Missouri, to Bill Cosby's rape allegations. But perhaps the most insightful part of Rock's interview came when he dismantled the idea of "black progress": When we talk about race relations in America or racial progress, it's all nonsense. There are no race relations. White people were crazy. Now they're not as crazy. Mr. Vaudrey's Class UPDATE – 21 December 2013: My department developed a week-long performance task about this, and it’s awesome. I admit, I would love for my 8th graders to remember a sweet lesson about Systems of Equations (when we used math to convince my wife to buy skis rather than rent them) or something more mathematical than what we did yesterday. But this will probably be the one they tell their parents about.

One Weird Old Trick to Undermine the Patriarchy My five-year-old insists that Bilbo Baggins is a girl. The first time she made this claim, I protested. Part of the fun of reading to your kids, after all, is in sharing the stories you loved as a child. When “Life Hacking” Is Really White Privilege It happens all the time that white people claim not to be racist because they didn’t intend to be racist; they weren’t thinking about that at all. But there are many situations in which it is precisely your job to think about that. Nothing induces more rage in others than your taking what you do not deserve and not even noticing.