Eduardo Paes: The 4 commandments of cities 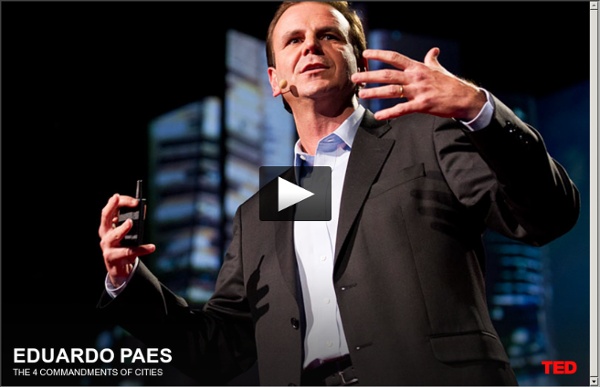 How Data is Making Rio de Janeiro a Smarter City Do you plan to attend 2014 FIFA World Cup or 2016 Olympic Games in Rio de Janeiro? If so, the city is already getting ready to welcome you. Here is how Rio is using technology and data management to get smarter. Manage information to avoid tragedies In April 2010, the State of Rio de Janeiro was hit by a natural disaster, when floods and mudslides killed over 200 people and made 15,000 homeless. Worse, Rio de Janeiro’s Mayor admitted that Rio’s preparedness was “less than zero”. Rio Operations Center, the city’s control room Although its initial focus was floods, the scope of Rio Operations Center expanded considerably. The Center is part of the Smarter Cities initiative that IBM has been promoting since 2007. The Center itself is a paradise for data geeks: the amount of information displayed on its 300 screens is impressive, starting with the images streamed from 200 traffic cameras (soon to be 400). Sharing data with the public through Twitter and apps What about you?

The American Dream The AMERICAN DREAM is a 30 minute animated film that shows you how you’ve been scammed by the most basic elements of our government system. All of us Americans strive for the American Dream, and this film shows you why your dream is getting farther and farther away. Do you know how your money is created? Or how banking works? Why did housing prices skyrocket and then plunge? Do you really know what the Federal Reserve System is and how it affects you every single day? Source: TheAmericanDream (www.theamericandreamfilm.com )

IBM Selects 5 Brazilian Startups to Help Build Smarter Cities IBM announced today the 5 finalist startups for its SmartCamp in Brazil, following a preliminary round of selections across 8 Brazilian cities. So what is the event about and what do these 5 startups do? What is IBM SmartCamp? The ninth global event of its kind this year, IBM’s next SmartCamp will take place in Rio de Janeiro on November 10th and 11th, in conjunction with the IBM Venture Capital Symposium. Betting on startups According to IBM, its SmartCamp provides mentorship to early stage start-ups and facilitates access to venture capital companies. “We believe entrepreneurs will play a critical role in addressing the needs of cities around the world. For these startups, it is also a huge market to conquer; IDC Government Insights estimates the new Smarter Cities information technology market opportunity at $34 billion in 2011, increasing more than 18% per year to $57 billion by 2014, IBM said. Betting on Brazil This isn’t IBM’s first action to promote smarter cities in the country.

Winning the Oil Endgame-Homepage n 2004, Rocky Mountain Institute's Chief Scientist, Chairman and Co-founder Amory Lovins and a team of RMI collaborators accomplished a highly complex and innovative task—the drafting of a roadmap for the United States to get completely off oil by 2050, led by business for profit. The result became a thoroughly researched, highly analytical yet practical book called "Winning the Oil Endgame" (WTOE). Following its release, RMI began working with key industry stakeholders to accelerate key components of the WTOE strategy. To aid in its implementation, RMI raised $3.6 million from private donors and foundations. This has led to many critical projects, including: Supporting the initial stages of Walmart's efforts with its suppliers to increase the efficiency of the firm's new heavy trucks by 25 percent through 2008 (the actual reduction in fuel intensity vs. 2005 was 38 percent), and to set a goal of doubled efficiency by 2015. The Innovation Dial The Road Ahead Richard N. Robert C. George P.

Tom Watson smacks down Guido Fawkes Rupert Murdoch is “not a fit person” to run a major international company, a report by the media select committee report today concluded, but descended into acrimony and accusations. But during the press conference, an amusing exchange took place. Tom Watson MP was accused by blogger Harry Cole (from Guido Fawkes) of contempt of Parliament by revealing details in his recently published book of the committee report. John Whittingdale (Tory MP) interjected and said that almost all of the evidence in the select committee report was already in public domain. Tom Watson MP then added snippets in the book that weren’t published before were cleared with the senior clerk of the committee. Watson then said he had a question for Harry Cole in return. He said asked why Paul Staines, aka Guido Fawkes, destroyed his computer hard drive after publishing the emails by Damian McBride a few years ago. Keep in mind that those emails were most likely retrieved by hacking too. Update:

Positive Money | A simple solution to the debt crisis