6 Tips to Free Up Tons of Storage Space on iPad, iPhone, and iPod Touch 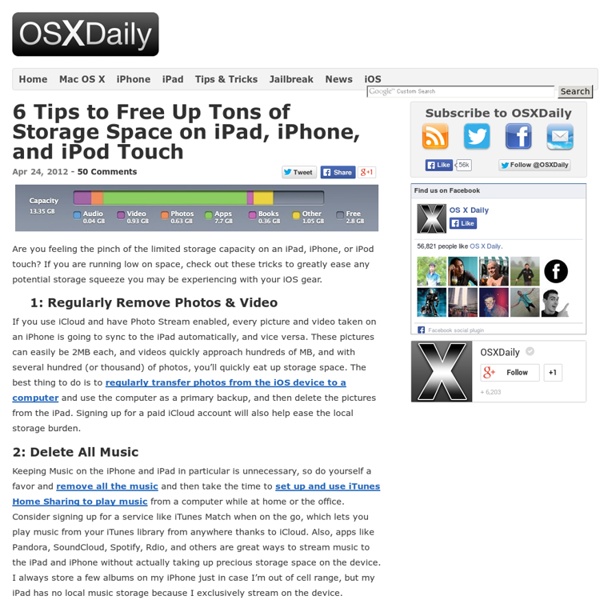 Are you feeling the pinch of the limited storage capacity on an iPad, iPhone, or iPod touch? If you are running low on space, check out these tricks to greatly ease any potential storage squeeze you may be experiencing with your iOS gear. 1: Regularly Remove Photos & Video If you use iCloud and have Photo Stream enabled, every picture and video taken on an iPhone is going to sync to the iPad automatically, and vice versa. These pictures can easily be 2MB each, and videos quickly approach hundreds of MB, and with several hundred (or thousand) of photos, you’ll quickly eat up storage space. The best thing to do is to regularly transfer photos from the iOS device to a computer and use the computer as a primary backup, and then delete the pictures from the iPad. 2: Delete All Music 3: Find Where Storage is Being Used and Clean Up It’s easy to check how much storage is available in iOS, and the same screen tells you which apps are taking up the most space. 5: Remove Watched Videos All done?

Download iOS Updates Once for Installing on Multiple Devices If you have several iPhones, iPads, or iPods that need updating to the latest version of iOS, you can use a nice trick to save some bandwidth and download a single iOS update file to apply to multiple devices from either Mac OS X or Windows. This is a perfect solution for a family that has multiple iPhones or iPads that need updating, particularly when you don’t want to download the same firmware multiple times. To be clear, the iOS devices must be of the same type and model, meaning three different iPhone 4s can use the same firmware, but an iPhone 4 can’t use the same update file as an iPad 2 would, and an iPod touch can’t use an iPhone 4S update file, and so on. To do this, you will need to download the iOS firmware files directly from Apple. For Mac OS X: Quit iTunesHit Command+Shift+G to bring up “Go To Folder” and enter the following path, depending on your iOS device: For Windows: Thanks to AJ & NeverEnuf for giving the idea for this great tip in our comments.

Amazon launches Storyteller to turn scripts into storyboards — automagically NOTE: GrowthBeat -- VentureBeat's provocative new marketing-tech event -- is a week away! We've gathered the best and brightest to explore the data, apps, and science of successful marketing. Get the full scoop here, and grab your tickets while they last. Upload your script, choose some backgrounds, and magically create a professional-looking storyboard of your movie. Or the graphic novel version of your text-based anything. Amazon Studios released Storyteller today to allow writers and filmmakers to quickly, easily, and cheaply storyboard their scripts. And it can be used for much, much more than just scripts. “We’ve found that many writers want to see their story up on its feet in visual form but find it harder than it should be to create a storyboard,” Roy Price, Amazon’s director of Studios said in a statement. You start by uploading a script to Amazon Studios — or by playing with one that’s already there. Above: You can choose shot framing Image Credit: John Koetsier

Ridiculously awesome iPad tips and tricks | Digital Crave - Yahoo! Think you know your Apple tablet inside and out? Oh, sure, you're well aware of double-tapping the Home screen to see all open apps, enabling iCloud to wirelessly sync content between devices and how to group apps into folders -- but there is a lot more to your beloved 9.7-inch iPad (from $499). And so the following is a handful of lesser-known tips and tricks to getting the most out of your iPad. If you have a few suggestions to share of your own, be sure to submit them in the Comments section below — so you get the credit for them. Split keyboard If you like to type while holding the iPad, simply press on the virtual keyboard with both thumbs and drag to each side of the tablet. Speak to me The new iPad doesn't have Siri — the powerful voice-activated "personal assistant" feature built into the iPhone 4S — but it does offer built-in voice dictation. Snap that screen Roam if you want to Copy en masse You can touch this Those dang kids Battery bust Switch it up Get back I've been framed Let's connect

How to Print from Your iPad: Printer and Printing Options When you can, use your iPad to save money, paper and time by sending and processing documents electronically. For those times when a printout is required or desired, here are three options for dealing with printing from your iPad. Option One An AirPrint capable printer. AirPrint is an Apple technology built into the iOS to support printing from the iPad. Option Two A program that connects to a printer through your computer. Printopia (Mac Only) $19. AirPrint Activator (Mac Only) Fingerprint (Mac or Windows) $9. Option Three An iPad App Here are three apps that support printing from your iPad to wireless printers. PrintCentral ($8.99) Mac or Wi

Tips And Tricks For Saving Battery Life On Your iPhone And iPad Good battery life is essential for a mobile device to succeed in the post-PC era, and Apple’s iOS devices continue to pack upgraded internals and improved battery technology into every product iteration. iPhone, iPad and iPod touch users can use a handful of tips and tricks for conserving precious battery on the go. Many of the tips are pretty basic, but every little bit counts when you’re trying to make it through the day on one charge. Here’s a roundup of tips and tricks for saving battery life on your favorite iOS device: Turn Down Screen Brightness The general consensus is that you should keep your screen brightness under 30% for optimal battery performance. Disable Location Services Location Services lets your apps access your device’s GPS to provide location-aware results and ads. Disable Time Zone Settings This nifty trick was discovered when iPhone 4S were initially experiencing battery life issues. Disable WiFi Turn WiFi off in Settings to save battery. Disable Bluetooth

iPhone or iPad Ran Out of Storage Space? Here’s How to Make Space Available Quickly You’ve been downloading tons of apps, books, music, and movies galore, and when you go to download the latest great app you find yourself unable to, confronted with a “Cannot Download – There is not enough available storage” message. What are you supposed to do when your iPhone, iPad, or iPod runs out of disk space? The simplest and fastest answer is to free up some storage capacity by focusing on apps you no longer use, we’ll show you the fastest way to do this so you can quickly get back to downloading the new apps or content you want. From the iOS home screen tap on “Settings”, then tap “General” followed by “Usage”, this shows us how much space is available and what’s eating it all upThe Usage list is sorted by total size, starting from the top look through the list for apps you no longer use When you find an app that is large that gets infrequent use, tap on it and then tap the big red “Delete App” button, then confirm the deletion at the alert dialog

Transfer Music from iPhone, iPod, or iPad to a Computer Everyone knows how easy it is to get music onto an iPod, iPhone, or iPad with the help of iTunes, but have you ever tried to get music off an iPod or iPhone and onto a new computer? As it turns out, transferring music from an iOS device and to a new or different computer isn’t a feature that is supported in iTunes. Nonetheless it’s easy to do on your own, and we’ll walk you through exactly how to copy all your music from a device and back to a computer. The end result? Transfer Music from iPhone, iPod, or iPad to iTunes on a Computer for Free This process will copy all music from the device to a Mac or Windows PC: Quit iExplorer when finished When finished all music will have been successfully copied from the iOS device to the Mac or PC, all while maintaining the music stored on the iPod/iPhone as well. Importing the Copied Music into iTunes Assuming you want the music you just copied from the iPod or iPhone imported into iTunes, this is what you need to do:

A Friendly Guide to Deploying iPads at Your School For personal use, the iPad is a breeze to set up. Turn it on, connect to a wireless network, enter your Apple ID, and you’re ready to go. If you’re already a resident of the Apple ecosystem, your apps are waiting for you in on a “Purchased” list in the App Store and backups of your other devices are available via iCloud for download to your current device. If you’re a new convert, getting started and downloading apps is a relatively painless experience. There is also a lot to like about iOS. That said, deploying iPads at any kind of scale is just short of maddening. First, kindly allow me to give you some background. Consider this a freshman level tutorial. On paper, Lion Server should work. Apple Configurator is a fickle mistress. Some caveats: Apple Configurator has three modes: Prepare, Supervise, and Assign. Prepare mode has a few options that you can tweak to your tastes. Step one is to get your iPads updated to iOS 5.1 and turn on supervision.

A Better Interactive Whiteboard: an iPad and the Apple TV | Tech Savvy Teachers Presented at ISTE 2012 The Interactive Whiteboard (IWB) promised a rich learning experience, but the reality of classroom use has, by in large, not lived up to its billing. An IWB has a natural bent towards “sage on stage” style teaching, and while some teachers do use it constructively, IWB use tends to reinforce a teacher transmitting information to the class. Student use of an IWB is usually very limited, and student use is limited by the logistical need to be at the front of the room. Technology is disruptive, and the AirPlay feature between an iPad 2 or later and an AppleTV has to have IWB manufacturers concerned. Not only can the iPad replace all of the functions of an IWB, but it brings so many more options. HDMI to VGA Adapters The AppleTV is primarily a home-entertainment device, and uses HDMI-out. 3 Taps is all it takes to mirror your iPad Double-tap the home button (or four finger swipe up if multitouch gestures are on)

8 Typing Tips for iPad and iPhone That Everyone Should Know and Use Learning to type well on the touchscreen keyboards in iOS that we all use on the iPhone, iPad, and iPod touch can take some time. To speed that process up and improve touch typing, here are a handful of great tips to make typing on iOS virtual keys much easier and faster. Some of these you’ll probably know and perhaps already use, and some you probably won’t, but all are very worthwhile to learn and master. 1. Access Special Characters Tapping and holding on many normal letters will reveal their special character versions instead. 2. iOS lets you set shortcuts to automatically expand to larger blocks of text or words. Open Settings and tap “General” followed by “Keyboard”Tap “Add New Shortcut” and enter the full phrase and then the shortcut, followed by “Save” 3. Unlike a traditional keyboard, the iOS virtual keyboards are very forgiving. 4. This is a sequence that makes typing in iOS so much easier that it should be required learning for all iPhone and iPad users. Tap and hold on the “.?