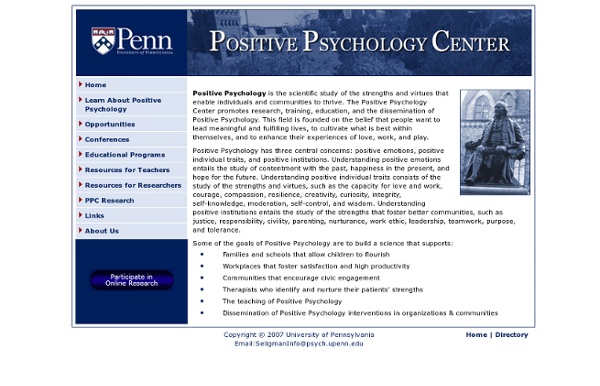 The Problem With Self-help Books: The Negative Side To Positive Self-statements In times of doubt and uncertainty, many Americans turn to self-help books in search of encouragement, guidance and self-affirmation. The positive self-statements suggested in these books, such as "I am a lovable person" or "I will succeed," are designed to lift a person's low self-esteem and push them into positive action. According to a recent study in Psychological Science, however, these statements can actually have the opposite effect. Psychologists Joanne V. Wood and John W. Lee from the University of Waterloo, and W.Q. asiansocialpsych.org On this site you will find information about Asian Association of Social Psychology's history, publications, and current activities. Please use the menu on the left of the page to find the information you want. Join AASP Latest AASP Newsletter (December 2013) You can access the AASP Newsletter Number 12 for December 2013 (PDF, 1.8 MB). 2013 AASP Conference

Positive psychology To Martin Seligman, psychology (particularly its positive branch) can investigate and promote realistic ways of fostering more joy in individuals and communities. Positive psychology is a recent branch of psychology whose purpose was summed up in 1998 by Martin Seligman and Mihaly Csikszentmihalyi: "We believe that a psychology of positive human functioning will arise, which achieves a scientific understanding and effective interventions to build thriving individuals, families, and communities."[1] Positive psychologists seek "to find and nurture genius and talent" and "to make normal life more fulfilling",[2] rather than merely treating mental illness. Positive psychology is primarily concerned with using the psychological theory, research and intervention techniques to understand the positive, adaptive, creative and emotionally fulfilling aspects of human behavior.[3]

Dream Dreams mainly occur in the rapid-eye movement (REM) stage of sleep—when brain activity is high and resembles that of being awake. REM sleep is revealed by continuous movements of the eyes during sleep. At times, dreams may occur during other stages of sleep. Inspiring Change – Kindle the Light “As far as we can discern, the sole purpose of human existence is to kindle a light in the darkness of mere being.” – C.G. Jung Darkness is long now in this part of the world and summer blooms on the other side of the planet. Brain Difference In Psychopaths Identified Professor Declan Murphy and colleagues Dr Michael Craig and Dr Marco Catani from the Institute of Psychiatry at King's College London have found differences in the brain which may provide a biological explanation for psychopathy. The research investigated the brain biology of psychopaths with convictions that included attempted murder, manslaughter, multiple rape with strangulation and false imprisonment. Using a powerful imaging technique (DT-MRI) the researchers have highlighted biological differences in the brain which may underpin these types of behaviour and provide a more comprehensive understanding of criminal psychopathy. Dr Michael Craig said: 'If replicated by larger studies the significance of these findings cannot be underestimated. The suggestion of a clear structural deficit in the brains of psychopaths has profound implications for clinicians, research scientists and the criminal justice system.'

APS Observer - Asian Psychology Coming of Age Cover Story Nonverbal Accents By Andrew Merluzzi Vol.27, No.4 April, 2014 It’s long been believed that people of all ages and ethnicities express their states of mind with the same physical cues. Why do some people enjoy life and others don't? Propose a movement whose aim is to bottle happiness so it can be dispensed to one and all, saving humanity from a future of chronic misery, and you might expect at least a few people to roll their eyes. But, starting tomorrow, Britain's most prestigious scientific institution, the Royal Society, will host a meeting for some of the world's top psychologists who have done just that. Over two days, they will discuss "the science of wellbeing". Their aim is to find out why it is that some people's lives go so right. What is it that makes them happy and fulfilled, while others seem doomed to founder in misery, dissatisfaction and dejection? As the psychologists converge on London, some, though dutifully upbeat, admit that the public could be forgiven for getting the wrong idea about the meeting.