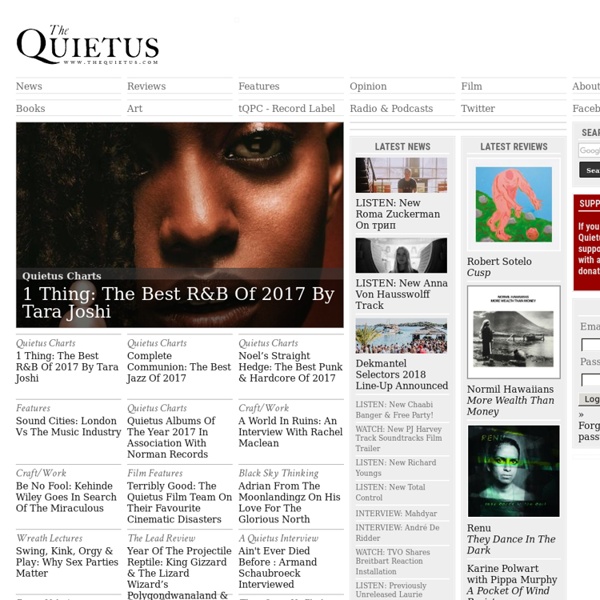 Features Praise Be! The Quietus' Favourite Religious & Spiritual Records Read the choicest cuts from the Quietus archive: reviews, features and opinion A Quietus eBook Our Debut Publication Albums Of The Year The 100 Best Of 2013

Late Night Work Club » Ghost Stories Late Night Work Club Project #1 A short film anthology. A whole bunch of animators gather around the campfire to tell their tales of ghosts and the ghostly. Tales to shock, amuse, and frighten! Everyone Calls Themselves An Ally Until It Is Time To Do Some Real Ally Shit By Xhopakelxhit, Ancestral Pride [PDF]: Every single time we speak publicly, or put ourselves out there we are always asked by other Indigenous Nations, settlers, and settlers of color: what can we do. We then go on to outline all the ways those who want to be potential allies can help us out in a tangible way, in a targeted way, and in a general way. Everyone takes notes, asks more questions, and seems really earnest. Jane Austen’s Contemporaries - Regency Reader Janeites and hist-ro fans undoubtedly have wished at least once (if not many, many times) that there were more Austens to read and absorb, to soak in during a long hot soak, to curl up to at bedtime. And almost having exhausted Heyer’s most excellent body of hist-ro works, I began to seriously wish this yet again. So after a troll, here is the wonderful world of Jane Austen’s contemporaries now just a click away.

Blog Search form List of Networks Log In You are here Home Some Came Running So. A couple of months, or weeks, or something, ago—my sense of time grows simultaneously more compressed and expanded as I grow older—someone on social media asked me where I ranked Bond movie X, and it reminded me that a few years back I labored somewhat mightily for my then-freelance-client, an entity called MSN Movies, on a lengthy piece in which I ranked the Bond pictures. That piece, published in annoying multi-click "gallery" form, has been purged from what is left of the MSN website, along with pretty much everything else I did for it. Fortunately, or unfortunately, I've been keeping my original submitted versions of much if not all of my work for my freelance clients backed up. So I thought, well, now that Spectre's coming out, everybody else is ranking the Bond films, why shouldn't I get some of that Secret Agent Traffic?

Traktor Scratch VS Serato Scratch ThudRumble posted a video this weekend of Qbert comparing the scratch response of Serato Scratch to Traktor Scratch. Predictably, there was little real difference between the two systems as both performed really well compared to traditional vinyl. With only a few minor performance differences between the 2 DVS leaders, most viewers were probably still left wondering which system is better for them. Dj TechTools will attempt to tackle that question in this article. As the video above clearly demonstrates, both systems have excellent response. The Darker Side of Classical Music undefined The Darker Side of Classical Music Classical music is a genre of music that touches on all emotions man is capable of feeling, some of which can only be evoked through the power of music itself. It can be difficult and even deceptive to pin the general feel of a piece of music under one label since there are so many different feelings constantly churning to the surface; peace and action, happiness and sadness, light and darkness. The deepest meanings, and therefore the most real are contained in these contrasts.

Prometheus Movie Discussion Link to Timeline: Welcome to the most expansive timeline of the Alien films available. It is based on the four 20th Century Fox films: Alien, Aliens, Alien 3, and Alien Resurrection, their respective novelisations, and film production information from a variety of sources. SEAN WILENTZ Yesterday, Columbia Records announced the publication in October of SW’s new book, 360 Sound. Advance order Amazon, B&N July 30, 2012, New York, NY – Columbia Records will celebrate its 125th anniversary with the release of a book titled 360 Sound: The Columbia Records Story on the great American record label and its role in initiating recorded music, cultivating great artists, and igniting cultural change. Written by Pulitzer Prize-and Grammy nominated author and historian Sean Wilentz, the book provides a journey through Columbia Records’ storied past and its contributions to entertainment from the invention of commercial recording through the present day.

How to Capture, Save, Record or Download Streaming Audio for Free Ever wonder how you could possibly record or rip a song that’s being streamed across the Internetonto your computer for free? Trying to download streaming audio directly to your computer can be quite difficult because sites usually have different security measures put in place, making it near impossible unless you’re a hacker. However, one surefire way of recording streaming audio from any web site is to simply capture it via the sound card on your computer. Basically, there are programs that can record whatever is being played by your computer’s speakers, so if you can hear it, it can be recorded. Of course, you’ll have to listen to the entire song since the recording is live, but it’s definitely much easier than trying to download the file from the web site directly.