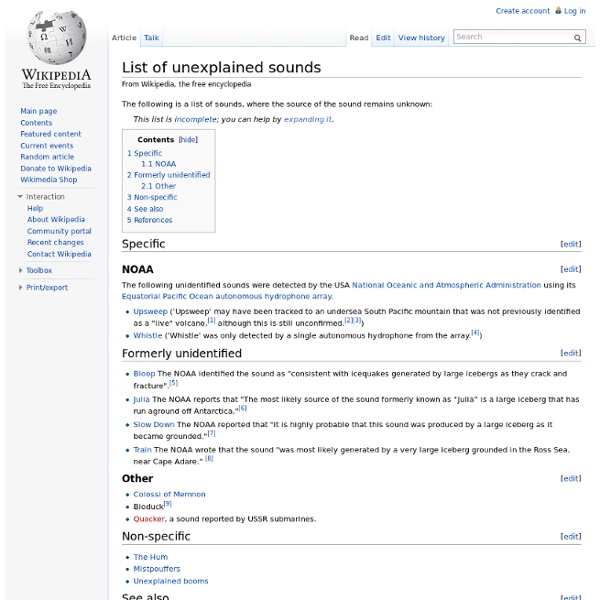 The following is a list of sounds, the sources of which remain unknown: NOAA (unidentified)[edit] The following unidentified sounds were detected by the USA National Oceanic and Atmospheric Administration using its Equatorial Pacific Ocean autonomous hydrophone array. Upsweep[edit] Spectrogram of the Upsweep sound Upsweep is an unidentified sound detected on the American National Oceanic and Atmospheric Administration's equatorial autonomous hydrophone arrays. The sound appears to be seasonal, generally reaching peaks in Spring and Autumn, but it is unclear whether this is due to changes in the source or seasonal changes in the propagation environment. WikiMiniAtlas 54°S 140°W﻿ / ﻿54°S 140°W﻿ / -54; -140Coordinates: 54°S 140°W﻿ / ﻿54°S 140°W﻿ / -54; -140, near the location of inferred volcanic seismicity, but the origin of the sound is unresolved. Whistle[edit] Spectrogram of the Whistle sound NOAA (formerly unidentified)[edit] Bloop[edit] Analysis[edit] Julia[edit] Slow Down[edit] Analysis[edit]

Sex and Marriage in the Mid to Late Medieval Times | The Medieval Society « Early Medieval Sex and Marriage | Main | Sex and Marriage During Tudor Times » Sex and Marriage in the Mid to Late Medieval Times By Madeline | March 13, 2008 After the sexual repression encouraged by the church in the early Medieval days, the people must have finally started to rebel as the mid to late Medieval times were rampant with sex, especially in the country where the people were free of the tight laced social rules prevalent in larger cities. In fact, most boys had lost their virginity by the age of 15 during this time. Back to the topic of virginity, though, because it truly played such an important role during this period in history. Obviously virginity in the daughter of a noble was worth more financially than the virginity of a common woman, therefore, the daughters of rich men were encouraged to maintain their virginity. The final point I wanted to make about this time in history was that women were finally relieved of their ‘evil’ reputation. Topics: Medieval Era |

List of unusual deaths - Wikipedia, the free encyclopedia - Nightly This is a list of unusual deaths. This list includes unique or extremely rare circumstances of death recorded throughout history, noted as being unusual by multiple sources. Some of the deaths are mythological or are considered to be unsubstantiated by contemporary researchers. Oxford Dictionaries defines the word "unusual" as "not habitually or commonly occurring or done" and "remarkable or interesting because different from or better than others Some other articles also cover deaths that might be considered unusual or ironic, including List of entertainers who died during a performance, List of inventors killed by their own inventions, List of association footballers who died while playing, List of professional cyclists who died during a race and the List of political self-immolations. Antiquity[edit] Middle Ages[edit] Renaissance[edit] 18th century[edit] 19th century[edit] 20th century[edit] 1920s[edit] 1950s[edit] 1960s[edit] 1961: U.S. 1970s[edit] 1980s[edit] 1990s[edit]

The Drive to Be Different | Wired Science  I’m waiting in line for a cappuccino. It’s gonna be a good one: short, intense, the foamed milk emulsified with the syrupy shot. I glance up from my phone and look around at the cafe. It is, for lack of a better adjective, a hipster joint. There are the artfully branded items for sale (T-shirts, espresso cups, etc.) and a long list of single varietal beans. Hot water is being poured out of sleek Japanese kettles; the baristas are wearing fedoras. I mean no disrespect. I was reminded of this contradiction while reading a new paper by two excellent social scientists, Jonah Berger and Baba Shiv. To answer these questions, Berger and Shiv played a variety of tricks on undergraduates. What does this data teach us about the drive for distinctiveness? Another experiment asked 90 male undergrads to complete a survey on the attractiveness of various swimsuit models. There are some obvious marketing takeaways from this research. Image: LWY/Flickr

Psychopathic killers: Computerized text analysis uncovers the word patterns of a predator As words can be the soul's window, scientists are learning to peer through it: Computerized text analysis shows that psychopathic killers make identifiable word choices – beyond conscious control – when talking about their crimes. This research could lead to new tools for diagnosis and treatment, and have implications law enforcement and social media. The words of psychopathic murderers match their personalities, which reflect selfishness, detachment from their crimes and emotional flatness, says Jeff Hancock, Cornell professor of computing and information science, and colleagues at the University of British Columbia in the journal Legal and Criminological Psychology. Hancock and his colleagues analyzed stories told by 14 psychopathic male murderers held in Canadian prisons and compared them with 38 convicted murderers who were not diagnosed as psychopathic. "Previous work has looked at how psychopaths use language," Hancock said.

Hesitant Speech Helps Kids, Um, Learn Parents never want their tots to learn to fumble over words, but they need not worry about their own “uhs” and “ums”—­such filled pauses may actu­­ally improve kids’ ability to pick up language. Such vocal hesitations, called dis­fluencies, tend to occur before we use a word that is infrequent or unfamiliar in our speech. They also precede words used for the first time in a conversation. Disfluencies keep adults tuned in and help them process the real words that come next. Even infants can distinguish between fluent and disfluent speech, research at Brown Univer­sity has shown. In the study, kids aged 16 to 32 months sat on their parent’s lap in front of a computer monitor that showed images of paired objects, one recognizable (such as a ball) and one imaginary but equally colorful. The first time a pair appeared, a voice from the computer said, “I see the ball.” During this third step, some­times the voice said simply, “Look!

Raëlism Raëlism , or the Raëlian Movement , is a UFO religion that was founded in 1974 by Claude Vorilhon , now known as Raël . It is numerically the world's second largest UFO religion, after Scientology . [ 2 ] An adherent of Raelism is a Raelian . The Raëlian Movement teaches that life on Earth was scientifically created by a species of extraterrestrials , which they call the Elohim . Members of this species appeared human and when having personal contacts with the descendants of the humans they made, they previously misinformed (on purpose) early humanity that they were angels , cherubim or gods . Raëlians believe messengers, or prophets, of the Elohim include Buddha , Jesus , and others [ 3 ] [ 4 ] [ 5 ] who informed humans of each era. [ 6 ] The founder of Raëlism, members claim, received the final message of the Elohim and that its purpose is to inform the world about Elohim and that if humans become aware and peaceful enough, they wish to be welcomed by them. [ edit ] History

The Toughest Little Bird You've Never Heard Of : Krulwich Wonders... They're nothing to look at. They're not colorful. They seem so ordinary, in mottled brown, black and gray, if you noticed them at all, you'd think, "ah, just another shore bird, pecking at something in the water." But you'd be so wrong. Bar-tailed Godwits are special. Josh Kurz for NPR They are the only birds known to fly more than 7,000 miles nonstop, that means no food breaks, no water breaks, no sleep breaks, no pausing, just pushing through cyclones, storms, headwinds, flappity flap, flap for days and nights — and this is their championship season. As you read this, a bunch of Bar-tailed Godwits or Kuakas, as they're called in New Zealand, are hanging out in western Alaska, eating a rich medley of clams, worms, seeds and berries, guaranteed to add ounces to their slight frames (check our exclusive Kuaka Workout Program below). Then they wait. According to wildlife biologist Bob Gill and his colleagues at the U.S. Fighting The Winds Nobody Does It Better What a bird!

English dialect vocabulary The Word Map Observing Lexical Variation All languages change over time and vary according to place and social setting. We can observe lexical variation - differences in words and phrases - by comparing the way English is spoken in different places and among different social groups. Despite the belief that dialect words are no longer very widely used, there remains a great deal of lexical diversity in the UK. Listen to these extracts of speakers using regionally specific vocabulary: meak, didle & crome: another skill, uh, when we used to clean the dykes out all by hand with the old meak and the old didle and crome — that‘s all lugging Show Commentary peevers but what, what do you remember playing as a child – as a child – hmm – eh, skipping ropes - oh yes – eh, peevers. nain I remember my nain – when I was about four – she couldn‘t speak a worl, word of English, always Welsh, Welsh, Welsh mistall and we‘d to get up and go down in – in wintertime – go down into the mistall we called it See Also

Alien world is blacker than coal Public release date: 11-Aug-2011 [ Print | E-mail Share ] [ Close Window ] Contact: Christine Pulliamcpulliam@cfa.harvard.edu 617-495-7463Harvard-Smithsonian Center for Astrophysics Astronomers have discovered the darkest known exoplanet - a distant, Jupiter-sized gas giant known as TrES-2b. Their measurements show that TrES-2b reflects less than one percent of the sunlight falling on it, making it blacker than coal or any planet or moon in our solar system. "TrES-2b is considerably less reflective than black acrylic paint, so it's truly an alien world," said astronomer David Kipping of the Harvard-Smithsonian Center for Astrophysics (CfA), lead author on the paper reporting the research. In our solar system, Jupiter is swathed in bright clouds of ammonia that reflect more than a third of the sunlight reaching it. TrES-2b orbits its star at a distance of only three million miles. Kipping and Spiegel determined the reflectivity of TrES-2b using data from NASA's Kepler spacecraft.

Last speaker of language Any language is determined to be an extinct language when the last native or fluent speaker of that language dies. There are some 500 languages out of a total of 6,000 being classified as nearly extinct because "only a few elderly speakers are still living".[1] Last known speakers of languages[edit] See also[edit] Notes[edit] Jump up ^ Believed to have been the last monoglot Cornish speaker, as opposed to other speakers such as Dolly Pentreath who could also speak English. References[edit]