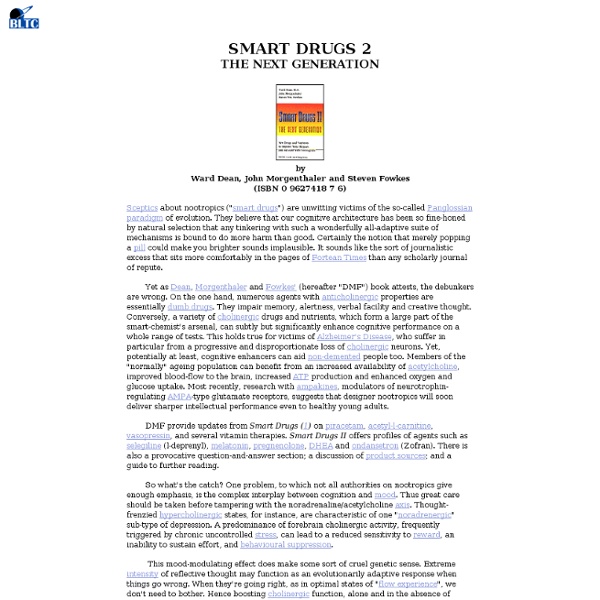 The Emergence of Noopolitik: Toward An American Information Strategy Strategy, at its best, knits together ends and means, no matter how various and disparate, into a cohesive pattern. In the case of a U.S. information strategy, this requires balancing the need to guard and secure access to many informational capabilities and resources, with the opportunity to achieve national aims by fostering as much openness as practicable. The authors' term to represent such strategic balancing is guarded openness. This report is part of the RAND Corporation monograph report series. The RAND Corporation is a nonprofit institution that helps improve policy and decisionmaking through research and analysis.

The Science of Learning: Best Approaches for Your Brain Do you wonder why people don’t understand the idea you’re trying to get across in a meeting? Are you mentoring another developer and struggling to understand why the still don’t get it? Do you run training courses and wonder why the attendees only learn 10% of the material? We are all teachers whether as informal mentors, coaches, trainers or parents. Only twenty years ago most people in the world of neuroscience believed that the connections between the neurons in your brain were fixed by the time you were a teenager (or even younger)[1]. The hippocampus is the gatekeeper for long term memory, in this case declarative memory (i.e. stories and experiences). Abstract Ideas We sometimes start talking about Unit Testing with a long theoretical explanation and we get blank stares from the people we’re trying to help. In the case of kids it would be more effective to teach math by using blocks or any other physical object that makes the idea concrete. What is going on in your brain? Emotion

The Diagrammatic Writings of an Asylum Patient (1870) These two images are from the book On the Writing of the Insane (1870) by G. Mackenzie Bacon, medical superintendant at an asylum (now Fulbourn Hospital) located near Cambridge, England. The pictures are the product of a “respectable artisan of considerable intelligence [who] was sent to the Cambridgeshire Asylum after being nearly three years in a melancholy mood”. Bacon goes on to explain that the man, after leaving the asylum, went “to work at his trade, and, by steady application, succeeded in arriving at a certain degree of prosperity, but some two or three years later he began to write very strangely again, and had some of his odd productions printed ; yet all this time he kept at work, earned plenty of money, conducted his business very sensibly, and would converse reasonably.” After a visit from a medical man who tried to dissuade him from writing this way the man wrote the following letter: Dear Doctor, To write or not to write, that is the question.

Radical New Thinking for a Changing World Applying Cognitive Psychology Principles to Education and Training From the President... Welcome to the website of the Australian Association for Research in Education. AARE is a large, national, member-run organisation for educational researchers and educators, and our association plays a critical role in supporting and strengthening major research partnerships and networks for the Australian educational research community. More... AARE-NZARE Joint Conference 2014 The website for the joint AARE-NZARE Conference, to be held in Brisbane from the 30th of November 2014, is now live. We look forward to seeing you in Brisbane in 2014. 2013 Conference Papers now Available Details of all papers presented at the 2013 conference have now been entered into the conference paper archive. Click the link to the left to access and search the database. AER Open Access 'Highlight Articles' A selection of six articles from the Australian Educational Researcher has been made available free of charge for a limited time. New Grant Funding for SIGs Read our Blog EduResearch Matters

Are Our Brains Really Just Computers? Take a look at the image above. Do you see a duck or a rabbit? Similarly, do you see the brain as being structured like a computer or the infinitely complex cosmos? Questions of perception are fundamental to how we investigate the world around us. Like the question of whether you see the duck and the rabbit, different people have different ideas of what the brain is and how it works—and certain ideas are more fashionable at one time or another. "That could be cosmologists and astrophysicists, but it may very well be artists, as well" In other words, if one idea of the brain, championed by a particular field of study, guides research down one path instead of another, will we lose out on what everybody else has to offer? Listen to Motherboard's podcast about brains: “It is like, I speak French and you speak Chinese,” Quirion told me at the IX Symposium in Montreal, before he participated in a panel discussion on interdisciplinary studies.

Behavior modification Description[edit] The first use of the term behavior modification appears to have been by Edward Thorndike in 1911. His article Provisional Laws of Acquired Behavior or Learning makes frequent use of the term "modifying behavior".[1] Through early research in the 1940s and the 1950s the term was used by Joseph Wolpe's research group.[2] The experimental tradition in clinical psychology[3] used it to refer to psycho-therapeutic techniques derived from empirical research. It has since come to refer mainly to techniques for increasing adaptive behavior through reinforcement and decreasing maladaptive behavior through extinction or punishment (with emphasis on the former). Behavior modification is a form of Behavior therapy now known as Applied behavior analysis. Emphasizing the empirical roots of behavior modification, some authors[4] consider it to be broader in scope and to subsume the other two categories of behavior change methods. Some areas of effectiveness[edit] Criticism[edit]

Moosphere Application of Behavior-Change Theories and Methods to Injury Prevention -- Gielen and Sleet 25 (1): 65 -- Epidemiologic Reviews + Author Affiliations Reprint requests to Dr. Andrea Carlson Gielen, Bloomberg School of Public Health, Johns Hopkins University, Baltimore, MD 21205 (e-mail: agielen@jhsph.edu). Received August 29, 2002. Accepted February 24, 2003. Abbreviation: HIV, human immunodeficiency virus. Reducing the burden of injury is an international health goal, one that requires an interdisciplinary perspective. Applications of behavioral science to injury prevention lagged behind other approaches during the last half of the 20th century. In planning for injury prevention and control, there has been a historical tension between the use of “active” (behavioral) strategies and “passive” (structural) strategies (1). Need for integrating passive and active strategies It is rarely feasible to achieve injury reduction without some element of behavior change. The above examples underscore the necessity of combining behavioral and environmental approaches to injury prevention (6, 20–22). Need for new models

The Strange Life of Simon Magus, Christian, Pagan, Magician, and Sorcerer Simon the Magician, otherwise known as Simon Magus, comes down through history predominately from the New Testament account, Acts of the Apostles 8:9-24, with all other ancient sources pertaining to him written after his death. Simon is discussed in a variety of different lights, most notably "as a Christian, a Jew, a pagan and the founder of a new religion; a magician, a sorcerer, a religious philosopher and an arch-heretic; a pseudo-apostle, a pseudo-Messiah and a pretended incarnation of God; and the 'father of all heresies.'" It is with this widespread influence in mind that Simon Magus' teachings have survived as long and as intact as they have. Simon is thought to have been a Samaritan by birth, coming from Gitta and traveling to Rome around the time of Emperor Claudius (reign from 41 AD to 54 AD), enacting all sorts of magical acts upon the way. Peter, Paul, Simon Magus and Nero. Peter's conflict with Simon Magus by Avanzino Nucci, 1620. Fall of Simon Magus by Leonaert Bramer.