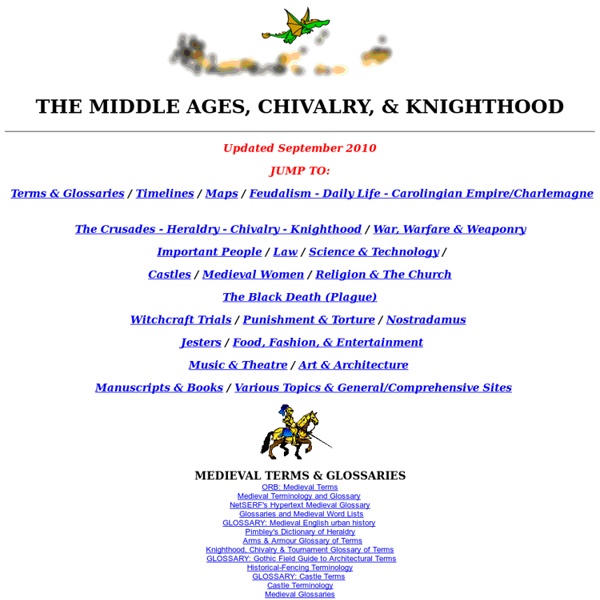 Internet History Sourcebooks Update Information 2006: In 2006 the Internet Medieval Sourcebooks and associated sourcebooks are undergoing a major overhaul to remove bad links and add more documents. 1. This project is both very large and fairly old in Internet terms. At the time it was instigated (1996), it was not clear that web sites [and the documents made available there] would often turn out to be transient. As a result there is a process called "link rot" - which means that a "broken link" is a result of someone having taken down a web page. 2. 3. The Internet Medieval Sourcebook is organized as three main index pages, with a number of supplementary documents. INTRODUCTION: MEDIEVAL SOURCES ON THE INTERNET Historians teaching medieval history surveys almost always want to combine a textbook, a sourcebook, and additional readings. GOAL: The goal here then has been to construct an Internet Medieval Sourcebook from available public domain and copy-permitted texts. By pointing students to this web site.

MedievalChurch.org.uk:An Internet Resource for Studying the Church of the Middles Ages Home Click here to jump straight to the articles: Original Preface. The Catholic Encyclopedia, as its name implies, proposes to give its readers full and authoritative information on the entire cycle of Catholic interests, action and doctrine. What the Church teaches and has taught; what she has done and is still doing for the highest welfare of mankind; her methods, past and present; her struggles, her triumphs, and the achievements of her members, not only for her own immediate benefit, but for the broadening and deepening of all true science, literature and art — all come within the scope of the Catholic Encyclopedia. It differs from the general encyclopedia in omitting facts and information which have no relation to the Church. Designed to present its readers with the full body of Catholic teaching, the Encyclopedia contains not only precise statements of what the Church has defined, but also an impartial record of different views of acknowledged authority on all disputed questions.

Medieval and Renaissance Fact and Fiction undefined This page is meant to be a guide to resources available on the Web for people who are interested in the history, culture, literature and re-creation of the Middle Ages and Renaissance. There are hundreds of sites on the Middle Ages on the Web. I know I have only a small percentage of what is out there, but I have tried to organize this site so that you will have an easier time finding what you want. Please e-mail me to let me know about good sites that I haven't included yet. Welcome to my site. Table of Contents There are two other related pages on Sharon's Medieval Web Site that you may enjoy visiting Visit my other Web Pages Sign my Guest Book Major Archives and Pages of Links Guide to Archaeology on the Internet An article in the Athena Review. The Labyrinth at Georgetown University NetSERF "The Internet Connection for Medieval Resources" Old English Pages by Cathy Ball at Georgetown University The Online Reference Book for Medieval Studies This Site includes: Archives of Documents