Which Social Network Should You Use 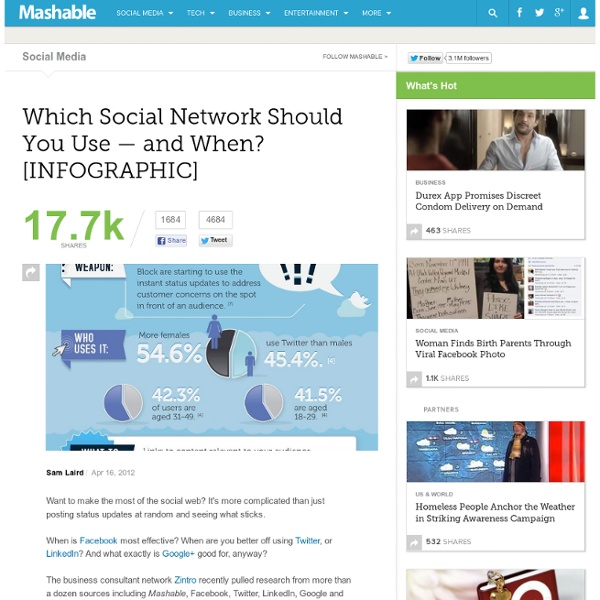 Want to make the most of the social web? It's more complicated than just posting status updates at random and seeing what sticks. When is Facebook most effective? When are you better off using Twitter, or LinkedIn? And what exactly is Google+ good for, anyway? The business consultant network Zintro recently pulled research from more than a dozen sources including Mashable, Facebook, Twitter, LinkedIn, Google and Quantcast to put together this nifty infographic, which will help you develop your social strategy. Do you use different social networks for different purposes? Thumbnail image courtesy of iStockphoto, arakonyunus

Resilience Thinking “The most potent keystone species in the world may be the sea otter,” wrote the biologist Edward O. Wilson. These sleek, furry creatures once lived in coastal waters from Baja, California, around the Pacific Rim, to the northern islands of Japan. Where they are present, the ecosystem tends to be characterized by dense kelp forests. The kelp provides shelter for fish, which in turn provide food for harbor seals. In ecological terms, sea otters are a keystone species, a species that determines the regime of the near-shore ecosystems that it inhabits.

Why Students Should Use Twitter I must admit I was skeptical and originally questioned the validity of Twitter. I initially viewed Twitter as just a tedious free service that lets you send a 140-character message, or “tweet to your followers” of lackluster and hum-drum information. I was not really interested in reading about the location of someone checking in on Four Square or what he or she was eating for dinner. Search Engine Startpage offers you Web search results from Google in complete privacy! When you search with Startpage, we remove all identifying information from your query and submit it anonymously to Google ourselves. We get the results and return them to you in total privacy. Your IP address is never recorded, your visit is not logged, and no tracking cookies are placed on your browser. When it comes to protecting your privacy, Startpage runs the tightest ship on the Internet.

Why Do People Volunteer? - Key to Motivating Volunteers Motivating volunteers can be a challenge, but may not be if one understands the reasons people volunteer. Volunteering means different things to many people; however, it usually come down to a couple of basic reasons. Before we discuss those, let's consider some of the possibilities. A. They May Have a Special Reason for Supporting the Cause

LinkedIn and Facebook: Personal Vs. Professional in the Identity Wars: Tech News and Analysis « As part of its ongoing attempts to make its business-oriented network more social, LinkedIn launched an open plugin platform on Wednesday that looks and sounds very much like the “open graph” platform Facebook launched last year with much fanfare. Like Facebook’s offering, LinkedIn now allows developers and website publishers to add various features from the network as widgets or plugins on their pages, so that users can connect their activity to the LinkedIn network. More than any of its previous moves, this one throws LinkedIn into head-to-head competition with Facebook for the clicks and identities of web users. LinkedIn has had a form of “open API” or programming interface since 2009, but never seemed to generate a lot of traction with it, and there have been ongoing complaints from developers about the difficulties and restrictions involved in working with the company’s APIs. Post and thumbnail photos courtesy of Flickr user Coletivo Membembe

Have a good project but no money? Ask everyone for a little Photo: Orwar (CC: by-nc-sa) For those who want to start small-scale, local sustainability projects, money is often a crucial problem. If you don’t have the initial capital, how do you make your dream come true? One way, which is gaining popularity in Sweden, is crowdfunding, which is basically getting a lot of people to invest a little money in your idea instead of one investor taking the whole risk.

Social Marker I am working hard on a new website called eptiv.com which is basically a news aggregator, a place where you can find the latest headlines from trusted news sources around the web. On eptiv.com you have the opportunity to share opinions and discuss all the latest news which are of interest to you. Please help by registering on the website (for free) and commenting on all the news stories that you find interesting. Feedback and suggestions are very welcome! Latest blog post