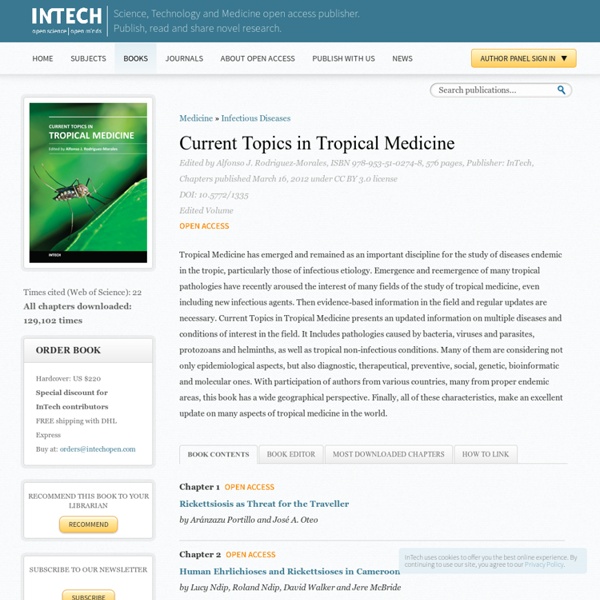 Edited by Alfonso J. Rodriguez-Morales, ISBN 978-953-51-0274-8, 576 pages, Publisher: InTech, Chapters published March 16, 2012 under CC BY 3.0 licenseDOI: 10.5772/1335 Edited Volume Tropical Medicine has emerged and remained as an important discipline for the study of diseases endemic in the tropic, particularly those of infectious etiology. Emergence and reemergence of many tropical pathologies have recently aroused the interest of many fields of the study of tropical medicine, even including new infectious agents. Then evidence-based information in the field and regular updates are necessary. Current Topics in Tropical Medicine presents an updated information on multiple diseases and conditions of interest in the field.

Asian Pacific Journal of Tropical Medicine Volume 9, Issue 10, October 2016 Chikungunya infection: A potential re-emerging global threat Abstract Infectious diseases are indeed a lifelong threat to everyone irrespective of age, sex, lifestyle and socio-economic status. The infectious diseases have persisted among the prominent causes of death globally. Recently, re-emergence of Chikungunya viral infection harmed many in Asian and African countries. Chikungunya was considered as a major threat in developing and under-developed countries; the recent epidemiological outbreak of Chikungunya in La Reunion urges the global researchers to develop effective vaccine against this viral disease.

PLOS 05/09/13 Lungworm Infections in German Dairy Cattle Herds — Seroprevalence and GIS-Supported Risk Factor Analysis In November 2008, a total of 19,910 bulk tank milk (BTM) samples were obtained from dairy farms from all over Germany, corresponding to about 20% of all German dairy herds, and analysed for antibodies against the bovine lungworm Dictyocaulus viviparus by use of the recombinant MSP-ELISA. A total number of 3,397 (17.1%; n = 19,910) BTM samples tested seropositive. The prevalences in individual German federal states varied between 0.0% and 31.2% positive herds. Parasites & Vectors 2011, 4:232 (13 December 2011) Integrated prevalence mapping of schistosomiasis, soil-transmitted helminthia Treatment availability and capacity building Uganda's National Control Programme for combating intestinal schistosomiasis and STHs has been active since 2003, and although regular monitoring has occurred at intervals since then, this is the first comprehensive overview of the status of treatment infrastructure and health capacity on the districts adjacent to Lake Victoria. The results here paint a mixed picture; on the one hand, some villages appear to function well in terms of drug availability, regular training of CMDs and administration of mass treatment. However, there were also locations, such as much of Wakiso district islands, where people were sceptical about the efficacy or need to take PZQ, while in Masaka district there was a noticeable absence of volunteers willing to take on the role of CMD. The reasons given for refusal included the distance between sites and the lack of adequate funding for travel. High disease prevalence and observation of co-infection

NATURE SCIENTIFIC REPORT 20/03/17 A smartphone-based diagnostic platform for rapid detection of Zika, chikungunya, and dengue viruses Assay speed and sensitivity We aimed to develop a rapid and reliable QUASR RT-LAMP assay for ZIKV, while relying on previously reported RT-LAMP assays for CHIKV and DENV17,19,22. We first set about identifying an optimal primer set for ZIKV, using the LAMP-compatible SYTO intercalating dyes to perform real-time monitoring. We then adapted the optimal primer set to the target-specific QUASR endpoint detection technique. The mechanism and chemistry of QUASR-based RT-LAMP detection techniques has previously been described in detail22. At least one recent publication describes a different RT-LAMP assay for ZIKV utilizing leuco crystal violet indicator13.

PLOS 11/07/13 Strongyloides stercoralis: Global Distribution and Risk Factors Abstract Background The soil-transmitted threadworm, Strongyloides stercoralis, is one of the most neglected among the so-called neglected tropical diseases (NTDs). We reviewed studies of the last 20 years on S. stercoralis's global prevalence in general populations and risk groups. Methods/Principal Findings A literature search was performed in PubMed for articles published between January 1989 and October 2011. GRIDA - In the Grip of Malaria in Africa The GRID-Arendal Maps & Graphics Library is an on-going project to collect and catalogue all graphic products that have been prepared for publications and web-sites from the last 15 years in a wide range of themes related to environment and sustainable development. There are currently 3022 graphics available in the database. Urban growth rate in Africa Africa’s urban centres are currently growing at an annual rate that is the fastest compared to other regions. The urban expansion is expected to continue, with cities like Abuja and Ouagadougou expecting very high growth in the next decade, while Cairo, Africa’s largest city, is projected to see a comparatively lower growth rate.

BMC Microbiology 03/05/17 Simultaneous detection of chikungunya virus, dengue virus and human pathogenic Leptospira genomes using a multiplex TaqMan® assay The aim of our study was to implement a syndromic approach based upon the use of a multiplex real time RT-PCR assay to facilitate rapid diagnosis of dengue-like syndromes in Reunion Island. This syndromic approach was in phase with regional health agency preoccupations because of the recurrent occurrences of leptospirosis but also taking into account the unprecedented major CHIKV outbreak in 2005–2006 and the regular number of clustered cases of DENV [22]. On the one hand, the use of a syndromic panel is appealing for economic reasons. It is cost saving due to the use of lower amount of enzyme than in simplex reactions. The multiplex assay requires less handle-time and it is subjected to lower risk of undesirable cross-reaction contaminations. On the other hand, multiplex assays have been criticized for a loss of sensitivity compared to their simplex counterparts.

BMC Research Notes 2013, 6:200 Strongyloides stercoralis is a cause of abdominal pain, diarrhea and urticaria in rural Cambodia Strongyloidiasis, an infection of an intestinal parasitic nematode, affects about 30–100 million people worldwide [1,2]. It is endemic in areas where sanitary conditions are poor and where the climate is warm and humid [3]. The clinical manifestations of strongyloidiasis vary greatly according to infection intensity and the immune-status of the patient. It is thought that more than 50% of all infections remain asymptomatic [4-6]. In Cambodia, a recent study showed that 24.4% and 49.3% of schoolchildren were infected with strongyloidiasis and hookworm, respectively [7]. Here, we report on the clinical manifestations of 21 strongyloidiasis patients from the rural province of Preah Vihear in northern Cambodia, with high numbers of S. stercoralis larvae in their feces.

PARASITES AND VECTORS DEC 2009 Distribution, host preference and infection rates of malaria vectors in Mauritania In Mauritania, malaria is a major public health concern in southern and south-eastern regions. In fact, it is clearly on the increase and significantly contributes to the increase in illness and mortality, especially in children under 5 years of age and pregnant women [1]. In spite of this importance, little is known about its vectors.

PLOS 09/05/13 A Public Health Response against Strongyloides stercoralis: Time to Look at Soil-Transmitted Helminthiasis in Full Strongyloides stercoralis infections have a worldwide distribution with a global burden in terms of prevalence and morbidity that is largely ignored. A public health response against soil-transmitted helminth (STH) infections should broaden the strategy to include S. stercoralis and overcome the epidemiological, diagnostic, and therapeutic challenges that this parasite poses in comparison to Ascaris lumbricoides, Trichuris trichiura, and hookworms. The relatively poor sensitivity of single stool evaluations, which is further lowered when quantitative techniques aimed at detecting eggs are used, also complicates morbidity evaluations and adequate drug efficacy measurements, since S. stercoralis is eliminated in stools in a larval stage. Specific stool techniques for the detection of larvae of S. stercoralis, like Baermann's and Koga's agar plate, despite superiority over direct techniques are still suboptimal. Figures