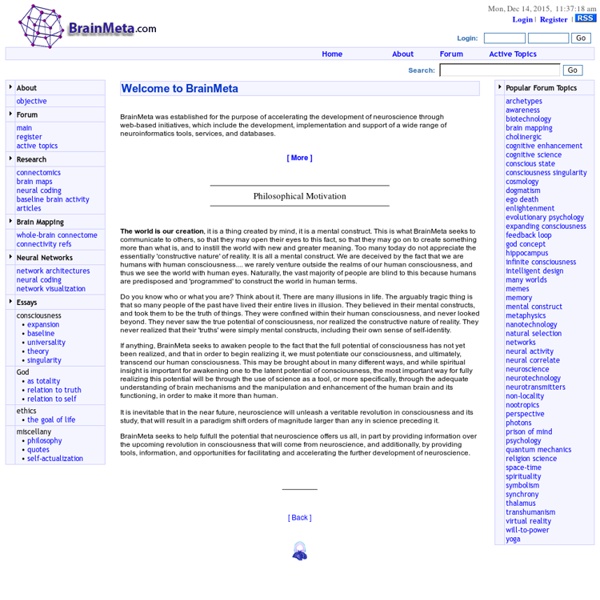 The Human Brain Biology - Brain Brain Waves When you drop a small stone in water, you see waves. Similarly our heart and our brain have wave patterns. The wave pattern of the heart is measured by ECG (electro cardiograph). Using the brain wave studies, scientists have discovered that our brain waves are of four types. The brain waves also have peaks that are similar to the peaks we see in water waves. Beta (13 to 25 cycles per second) This brain wave indicates that your conscious mind is in control. Left brain and right brain working together Usually the left brain and the right brain waves are independent. For both, the peaks are reached together. Scientists had long believed that brain activity such as brain waves and secretion of brain chemicals were beyond conscious control. Back to Contents Brain Activity During Meditation The brain is an electrochemical organ - using electromagnetic energy to function. There are four categories of these brainwaves. During meditation brain waves alter.

Some brain wiring continues to develop well into our 20s The human brain doesn't stop developing at adolescence, but continues well into our 20s, demonstrates recent research from the Faculty of Medicine & Dentistry at the University of Alberta. It has been a long-held belief in medical communities that the human brain stopped developing in adolescence. But now there is evidence that this is in fact not the case, thanks to medical research conducted in the Department of Biomedical Engineering by researcher Christian Beaulieu, an Alberta Innovates – Health Solutions scientist, and by his PhD student at the time, Catherine Lebel. "This is the first long-range study, using a type of imaging that looks at brain wiring, to show that in the white matter there are still structural changes happening during young adulthood," says Lebel. The duo recently published their findings in the Journal of Neuroscience.

genetic-programming.org-Home-Page Rewriting the Mind – We Are What We Think - Evolving Beings | Consciousness Expansion and Heart-Centered Living The conscious mind is the part we are aware of – the part that does the thinking, worrying, planning and creating. It is a tiny part of the structure; it is the subconscious that is the looming bulwark, a massive entity with incredible powers and potentials. Its unique characteristic is that it can create anything that we command it to create, by virtue of the thoughts we think. If you believe that you cannot achieve something, if you believe that you cannot have something, the subconscious will create conditions, so that your beliefs are proved. Thus the negative thoughts that create our negative conditioning, can be overthrown by affirming their opposite. To transform your life you must have a picture of yourself as you wish to be. The Power of the Subconscious Mind Awareness of the incredible power of the subconscious, conveyed by writers such as Joseph Murphy, author of ﻿The Power of Your Subconscious Mind, is behind the New Age deployment of affirmations to change oneself. 1. 2. 3.

Scientists use brain activity analysis to reconstruct words heard by test subjects Scientists have developed technology that is able to reconstruct words heard by test subjects, through analyzing their brain activity (Photo: Elvert Barnes) Image Gallery (2 images) Last September, scientists from the University of California, Berkeley announced that they had developed a method of visually reconstructing images from peoples' minds, by analyzing their brain activity. Much to the dismay of tinfoil hat-wearers everywhere, researchers from that same institution have now developed a somewhat similar system, that is able to reconstruct words that people have heard spoken to them. Instead of being used to violate our civil rights, however, the technology could instead allow the vocally-disabled to "speak." Epilepsy patients were enlisted for the study, who were already getting arrays of electrodes placed on the surface of their brains to identify the source of their seizures. According to study leader Brian N. About the Author Post a CommentRelated Articles

Brain Explorer genetic-programming.com-Home-Page Welcome to the Possibilium Love Deactivates Brain Areas For Fear, Planning, Critical Social Assessment Love Deactivates Brain Areas For Fear, Planning, Critical Social Assessment Andreas Bartels and Semir Zeki of the Wellcome Department of Imaging Neuroscience, University College London have found using Functional Magnetic Resonance Imaging (fMRI) that love turns down activity in some areas of the brain in part so that we will not see flaws in the object of our affections. However the key result was that it's not just that certain shared areas of the brain are reliably activated in both romantic and maternal love, but also particular locations are deactivated and it's the deactivation which is perhaps most revealing about love. Among other areas, parts of the pre-frontal cortex – a bit of the brain towards the front and implicated in social judgment – seems to get switched off when we are in love and when we love our children, as do areas linked with the experience of negative emotions such as aggression and fear as well as planning. Well, consider the possibilities.

The neurobiology of politics What, if anything, should we make of studies that purport to find neurological differences between people who self-identify as "conservative" and people who self-identify as "liberal?" You've seen studies like that in the paper. You've heard them argued about on radio and TV shows. Behavioral therapist Andrea Kuszewski has a great guest post up at The Intersection blog, looking at what we can (and can't) learn from the handful of studies that have attempted to link politics and neurobiology. If you're going to talk about these studies at all, Kuszewski writes, you're going to have to understand the context behind them. This is definitely a story worth reading all the way through. 1.