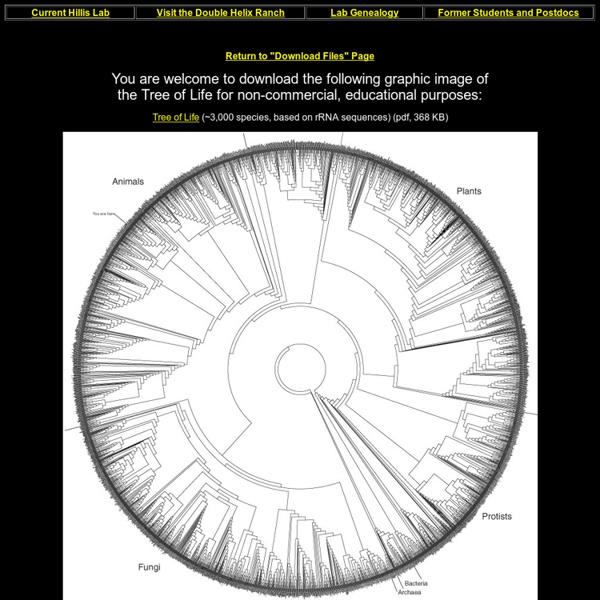 Return to "Download Files" Page You are welcome to download the following graphic image of the Tree of Life for non-commercial, educational purposes: Tree of Life (~3,000 species, based on rRNA sequences) (pdf, 368 KB) (see Science, 2003, 300:1692-1697) This file can be printed as a wall poster. Printing at least 54" wide is recommended. Tree of Life tattoo, courtesy of Clare D'Alberto, who is working on her Ph.D. in biology at the University of Melbourne. The organisms depicted in this tattoo are (starting at 4 o'clock and going around clockwise): (1) a cyanobacterium (Anabaena); (2) a radiolarian (Acantharea); (3) a dinoflagellate (Ceratium); (4) an angiosperm (Spider Orchid); (5) a couple species of fungi (Penicillium and a yeast); (6) a ctenophore (comb jelly); (7) a mollusc (nudibranch); (8) an echinoderm (brittle star); and (9) a vertebrate (Weedy Sea Dragon). Here is another great Tree of Life tattoo! Cover of Molecular Systmatics, 2nd ed

PBS Can Wind Turbines Make You Sick? Residents living in the shadows of wind turbines say the sound is making them sick. But so far the science isn't there. From NOVA Next | Jun 27, 2018 Thirty Years Ago Today, Global Warming First Made Headline News On June 23, a NASA climate scientist, James Hansen, told a U.S. From NOVA Next | Jun 23, 2018 New Middle Eastern Particle Accelerator’s Motto is “Science for Peace” In a region in turmoil, an unprecedented joint venture of scientists and policymakers is working together on Jordan’s new particle accelerator under the motto "science for peace." From NOVA Next | Jun 21, 2018 Psychological Damage Inflicted By Parent-Child Separation is Deep, Long-Lasting Here's what happens in the brain and the body when a child is forcibly separated from his or her parents.

Protein Data Bank - RCSB PDB A Structural View of Biology This resource is powered by the Protein Data Bank archive-information about the 3D shapes of proteins, nucleic acids, and complex assemblies that helps students and researchers understand all aspects of biomedicine and agriculture, from protein synthesis to health and disease. As a member of the wwPDB, the RCSB PDB curates and annotates PDB data. The RCSB PDB builds upon the data by creating tools and resources for research and education in molecular biology, structural biology, computational biology, and beyond. Use this website to access curated and integrated biological macromolecular information in the context of function, biological processes, evolution, pathways, and disease states. A Molecular View of HIV Therapy January Molecule of the Month Nuclear Pore Complex Deposition Preparation Tools Data Extraction Small Molecules Ligand Expo: Search the Chemical Component Dictionary for the IDs of released ligands Data Format Conversion 3D Structure Viewers

The Internet - A Playground for the Sociologist | Scott Golder & MIT Media Lab This ScienceLives article was provided to LiveScience in partnership with the National Science Foundation. The Internet is a sociologist's playground, says Scott Golder, a graduate student in sociology at Cornell University. Although sociologists have wanted to study entire societies in fine-grained detail for nearly a century, they have had to rely primarily upon large-scale surveys (which are costly and logistically challenging) or interviews and observations (which provide rich detail, but for small numbers of subjects). Golder hopes that data from the social Web will provide opportunities to observe the detailed activities of millions of people, and he is working to bring that vision to fruition. The same techniques that make the Web run—providing targeted advertisements and filtering spam—can also provide insights into social life. Name: Scott A. Field of Study: Sociology What inspired you to choose this field of study? What is the best piece of advice you ever received?