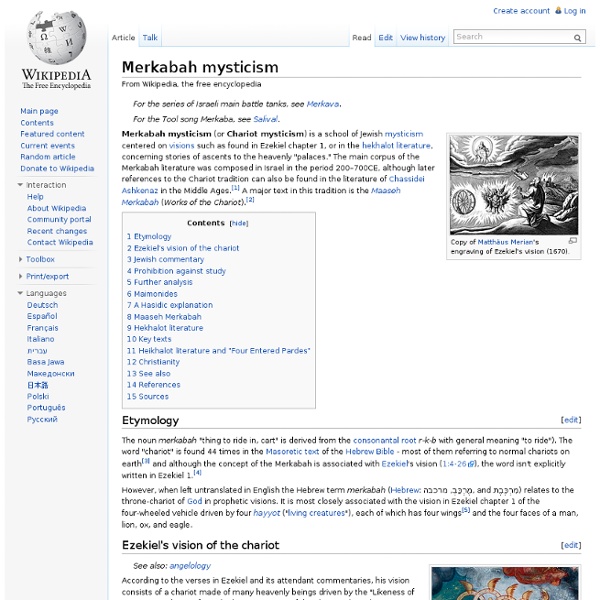 Etymology[edit] The noun merkabah "thing to ride in, cart" is derived from the consonantal root r-k-b with the general meaning "to ride". The word "chariot" is found 44 times in the Masoretic text of the Hebrew Bible – most of them referring to normal chariots on earth,[3] and although the concept of the Merkabah is associated with Ezekiel's vision (1:4–26), the word is not explicitly written in Ezekiel 1.[4] Ezekiel's vision of the chariot[edit] Ezekiel's Wheel in St. According to the verses in Ezekiel and its attendant commentaries, his vision consists of a chariot made of many heavenly beings driven by the "Likeness of a Man." The Bible later makes mention of a third type of angel found in the Merkabah called "Seraphim" (lit. Early Jewish merkabah mysticism[edit] Mark Verman has distinguished four periods in early Jewish mysticism, developing from Isaiah's and Ezekiel's visions of the Throne/Chariot, to later extant merkabah mysticism texts:[6] [edit] Prohibition against study[edit] Related:  Metro

Seal of Solomon A hexagram on the obverse of Moroccan 4 falus coin, dated AH 1290 (AD 1873/4). The current flag of Morocco, introduced in 1915 (r. Yusef) displays a green pentagram in reference to Solomon. The Seal of Solomon (or Ring of Solomon, Arabic Khātim Sulaymāni خاتم_سليمان) is the signet ring attributed to King Solomon in medieval Islamic tradition, later also in the Jewish Kabbalah and in Western occultism. It was often depicted in either a pentagram or hexagram shape; the latter also known as Shield of David or Star of David in Jewish tradition. The legend of the Seal of Solomon was developed primarily by medieval Arabic writers, who related that the ring was engraved by the name of God and was given to the king directly from heaven. In Islamic eschatology, the Beast of the Earth is equipped with both the Staff of Moses and the Seal of Solomon and uses the latter to stamp the nose of the unbelievers.[2] The date of origin legends surrounding the Seal of Solomon is difficult to establish.

The hidden and manifest God: some ... - Peter Schäfer Legal grounds AGAINST Benn Act & Letwin Amendment - the Government has supremecy over LEGISLATURE as its not an actor. And The Proper Denial of Royal Assent Twenty-one eminent constitutional lawyers expressed this view in a letter to the Times (3 4 19): ‘Any attempt to advise refusal of Royal Assent to a Bill passed by Parliament would stand constitutional principle on its head. It would presume a governmental power to override Parliament, yet it is in Parliament, not the Executive, that sovereignty resides’. But it is the eminent-21 who stand constitutional principle on its head. The true principle is: it is in Parliament (not the Executive, and not the Legislature) that sovereignty resides. The name Parliament, or parliamentum, came (from the Old French: parlement, parler) into use in England in the 14th century (the Modus Tenendi Parliamentum, probably 1321), but by the 15th century it had come to mean a legislature (OED 3rd edition, 2005); and, indeed, that’s what it was. And if it were just one of them, that one would have to be the executive. A distinctive aspect of the Queen’s constitutional duty is for her to act only on advice.

Table of correspondences History[edit] Tables of correspondences are not limited to magical spellcasting. Gnostic books in the Nag Hammadi Library contain lists of aeons and archons (good and evil beings), correlating them to virtues and vices. The First Book of Enoch lists fallen angels and their spheres of influence. Organization[edit] Collecting attributes or indexes into small familiar sets provides a sense of orderliness: Four: the Western classical elements and Eastern wu xing, the cardinal directions and winds, the suits Tarot cards, the canonical gospels.Seven: the classical planets and days of the week;Twelve: the months of the year, the signs of the zodiac, the Twelve Tribes of Israel, and the twelve Olympians; References[edit] Bill Whitcomb, The Magician's Companion, Llewellyn's High Magic Series. External links[edit]

Zohar: Genesis: Chapter XVIII. Higher Devachanic or Heavenly Spheres Sacred Texts Judaism Index Previous Next p. 180 SAID Rabbi Abbi: "The higher or celestial world with its accompanying spheres, though invisible to mortal sight, has its reflection and analogue, namely, the lower world with its circumambient spheres, according to the saying, 'As above, so below.' It is written, "And the earth was without form and void" (Tohu va Bohu). p. 181 of its reflection. Rabbi Jose having asked the question: "What kind of world is that which is called Zia?" "It is the place of Gehenna or Hell, 'a land of draught and of the shadow of death' (Jer. ii, 1). "The first of these higher or celestial spheres and nearest to the earth, is altogether void of light and is the abode of angels who are like tempestuous winds, never seen, but felt, and are always invisible as they are void of light and darkness and undistinguished by any color. p. 182 "The third celestial sphere is pervaded and filled with fire and flames. p. 183 darkness. p. 184 Footnotes Next: Chapter XIX.

Boris close to victory – 33 Labour and Tory rebels to back deal Brexit: Bridgen reveals he will vote for Boris' deal Boris Johnson secured changes to the Withdrawal Agreement and Political Declaration with the European Union and is now fighting to get his Brexit deal over the line, with the historic vote in the House of Commons scheduled for Saturday. Government whips are working to get the Prime Minister’s plan ratified by Parliament and have calculated it will pass - IF they can persuade enough Labour MPs, and the Tory rebels to back it. There are 650 MPs in Westminster. Of these, Sinn Fein’s seven members do not vote, and nor does Speaker John Bercow or his three deputies. Neither are the votes of the four vote tellers - two Conservative MPs in favour, two Labour MPs against - included in the overall result. This means the Government will need at least 320 votes to be certain of a majority. Assuming every Conservative MP who is able to vote backs the deal, this gives the Government 287 votes - short of a majority. Brexit news: What happens next?

ἱερός Ancient Greek[edit] Alternative forms[edit] ἱαρός (hiaros) (Doric)ἱρός (hiros) (Ionic)ἷρος (hiros) (Aeolic) Etymology[edit] From Proto-Indo-European *ish₂ros. Pronunciation[edit] (5th BC Attic): IPA: /hi͜i.erós/(1st BC Egyptian): IPA: /hiːɛrós/(4th AD Koine): IPA: /ierós/(10th AD Byzantine): IPA: /ierós/(15th AD Constantinopolitan): IPA: /ieɾós/ Adjective[edit] ἱερός • (hieros) m, ἱερά f, ἱερόν n; first/second declension Inflection[edit] Descendants[edit] English: hiero- References[edit] Heichalot The Heichalot & the Merkavah (The Palaces & The Chariot) The [subject of] forbidden sexual relations [cf. Lev.18:6ff.] may not be expounded in the presence of three, nor the 'work of creation' [ma'aseh braishit] in the presence of two, nor the '[work of] the chariot' [ma'aseh merkavah] in the presence of one, unless he is wise and understands from his own knowledge. Mishnah, Hagigah 2:1. Our rabbis taught: Four entered the 'Garden' [pardes], namely, Ben Azzai, Ben Zoma, Acher, and Rabbi Akiva. Talmud, Hagigah 14b. What does CHaSHMaL [Ezekiel 1:4,27; 8:2] mean? Talmud, Hagigah 13a-b. We asked him [Rabbi Ishmael], Who are those who are among those who 'descend to the chariot' and are not among those who 'descend to the chariot'? from Pirkei Heichalot Rabbati (The Greater 'Chapters of the Palaces'), chap.20, 4. ms. published by S.A.Wertheim, in Batei Midrashot (Jerusalem: Mossad HaRav Kook, 1952), v.I, p.98. Rabbi Ishmael said: How beloved is Israel before the Holy, Blessed One!