A Baseline for Front-End Developers 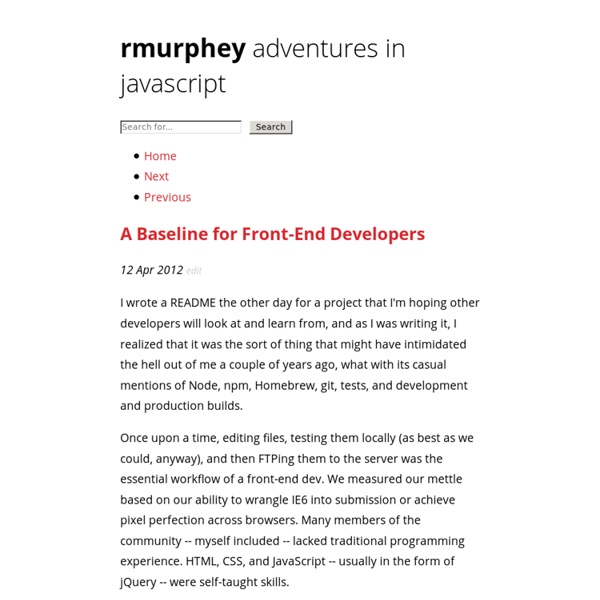 12 Apr 2012 edit I wrote a README the other day for a project that I'm hoping other developers will look at and learn from, and as I was writing it, I realized that it was the sort of thing that might have intimidated the hell out of me a couple of years ago, what with its casual mentions of Node, npm, Homebrew, git, tests, and development and production builds. Once upon a time, editing files, testing them locally (as best as we could, anyway), and then FTPing them to the server was the essential workflow of a front-end dev. We measured our mettle based on our ability to wrangle IE6 into submission or achieve pixel perfection across browsers. Many members of the community -- myself included -- lacked traditional programming experience. HTML, CSS, and JavaScript -- usually in the form of jQuery -- were self-taught skills. Something has changed in the last couple of years. Whatever it is, I think we're seeing the emphasis shift from valuing trivia to valuing tools. JavaScript Testing The End

gnedster/Front-end-Developer-Interview-Questions 11 Tips on Hiring a Rails Developer By Peter Cooper / November 29, 2007 The following article is a guest article written by John Philip Green of Savvica, a Toronto based educational technology company whose development efforts are focused on Ruby and Rails. Hiring Rails full-time Rails developers is hard. Here's why: Surging demand. I've hired ten full-time Rails developers into startups so far in 2007, but to do that I've had to interview hundreds and learned a lot of lessons. Don't use Monster.com or recruitment agencies. Happy Hiring!

Great questions about client-side development from a server-side developer This question came in today and I thought it was an excellent one to share with my readers. It is also one of those questions with a lot of different takes so I hope my readers chime in with their own opinions as well. The reader wants to remain anonymous, but I really feel like he is in a similar position as a lot of my other readers as well. So, let's get into it. First, some background (that I'm mangling a bit to help keep his anonymity so please excuse any awkwardness). 12 years in IT. While I was in a different role, I was doing roughly the same over the past decade as well. Now - the questions: The more courses and conferences I go to and the more I learn/read about the need to move my server side websites and applications to more client side with 100% responsiveness (which to me, means built on a js platform, with a bootstrap framework). Technically you are talking about two very different things. When I began my development career, I was mainly doing simple HTML sites.

Keeping Up with New JavaScript, HTML and CSS Projects Developers love things that are shiny and new, and, in a world where new JavaScript or CSS libraries are released faster than babies are born, it can be hard to keep up. I've maintained my own weekly update which recently moved to my Flippin' Awesome site (follow the news category for the weekly update), and one of the toughest pieces is finding not just new and updated projects, but worthwhile ones! This post is a thank you to some of the best resources that I rely on for that task. Of course, for the most part I rely on people who create projects to promote them on their blogs, Twitter or elsewhere. Web Developer Focused Sites DailyJS DailyJS is run by Alex Young and in addition to featuring great tutorials on topics like Node and AngularJS, it has weekly roundups covering newly released projects in JavaScript, Node and jQuery. CoDrops CoDrops has some of the most attractive and impressive demos and tutorials around. Web Developer Focused Newsletters Other Resources

"Accidentally" Freelance From time to time, I’ll be talking to someone in the startup industry and I’ll mention I’m a freelancer. “Oh, are you working on a startup?" they’ll often ask. “No, though I have a couple side projects and experiments," I’ll say. Then, it happens. It doesn’t happen. There’s this stigma in the startup universe around being a contractor, consultant, or freelancer. When it comes down to it, I do what I do because it’s not always about going “big" and betting it all on a startup. I enjoy the freedom. It’s true that there may be more stress and more worry—what if business slows down? At the end of the day, the work I do touches many people, I love maintaining a close relationship with my awesome clients, and I love being able to help companies stretch themselves in ways they would otherwise struggle to do. Honestly, work has been so busy these days that I’ve even been working on expanding, bringing in a partner and adding new resources to take on bigger and even more impactful work.

Hiring Developers: A Guide for Recruiters | REVERB Over the summer, I was invited to speak with the recruiting team at the S.I Systems Vancouver office. I popped in and delivered a lunch and learn style presentation with the goal of helping their team better distinguish top-tier developers from the not-so-top-tier developers. Recruiters constantly face this challenge, and given most of recruiters have little to no programming background, it is necessary to address to the issue. Below is an excerpt from the presentation. First, we need to define what a “good” programmer is. Without a doubt, “good” varies from client to client and role to role. Secondly, let it be known that this is all in my own personal opinion. The first fact that is important for a recruiter to understand is this: to know if a candidate is a good programmer, a skilled programmer must write code with them. I firmly believe that this is the most fundamental tool to assess the actual level and talent of a software engineer. What are you reading these days?