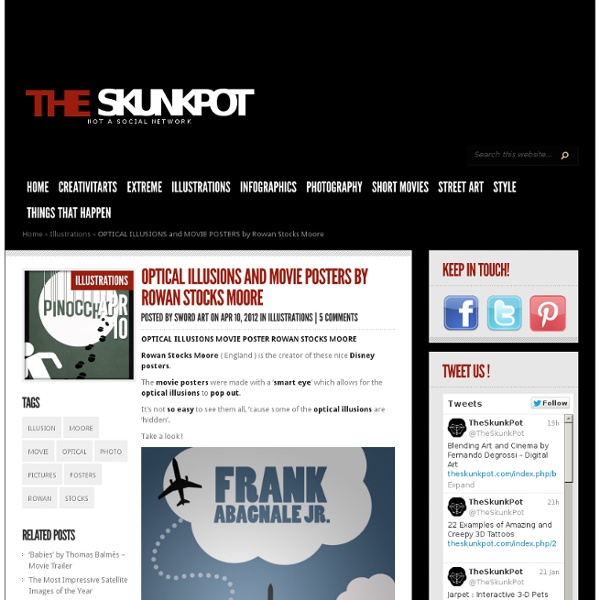 Vintage Travel Posters and Relative Dimension in Space Whether the Doctor and crew rarely ending up where the meant to visit is a result of the Doctor not being able to drive the TARDIS or the TARDIS taking him where he needs to be out of its own volition, our favorite Time Lord generally ends up impacting the most important bits of human history. Sometimes he ends up in England, saving Shakespeare from alien witches, and sometimes he offhandedly mentions how he might’ve married Marilyn Monroe on accident. Sometimes he ends up in Space Florida for a nice Spacecation, and sometimes he ends up in India, seeing the sights without having to save the universe. We rarely see those vacations, since a nice rest probably wouldn’t make a thrilling adventure, but rest assured, if it exists, the Doctor has (or will have) been there. (Andrew Le via Super Punch)

50 Inspirational Typographic Poster Designs The art of the typeface, from the typographer who creates them down to the designer who meticulously meddles with settings to get them just right in their designs — from the size to the letter spacing to the line length — is a complicated one. Many designers get overwhelmed just trying to get the typography right on simple websites. But here we have 50 typographic posters where the art lies in not just getting the letters right, but using them to paint the picture. Photographer Captures An Underwater Dance Of Colors The shapes displayed in Luka Klikovac’s work look like colored smoke, or maybe strange deep-sea creatures, but they’re actually mixtures of colored and black liquids immersed in water. The Serbian photographer’s photo series is called Demersal and was based on the unique motions resulting from the combination of fluids. To create this psychedelic effect, the photographer used nothing but his camera and lights capable of showing the dance of fluid shapes captured by his lenses. No digital editing resources were used afterwards, so what you see in the images are actually the precise moments when the two elements were combined. Klikovac said that the goal of his work is to create images that allow people to escape from their daily routine and that his underwater shapes should be interpreted like the Rorschach inkblot test.

Hockney-Falco thesis A diagram of the camera obscura from 1772. According to the Hockney–Falco thesis, such devices were central to much of the great art from the Renaissance period to the dawn of modern art. The hypothesis that technology was used in the production of Renaissance Art was not much in dispute in early studies and literature.[2] The 1929 Encyclopedia Britannica[2] contained an extensive article on the Camera obscura and cited Leon Battista Alberti as the first documented user of the device as early as 1437.[2] The discussion started by the Hockney-Falco thesis ignored the abundant evidence for widespread use of various technical devices, at least in the Renaissance, and, e.g., Early Netherlandish painting.[3] Setup of the 2001 publication[edit] Part of Hockney's work involved collaboration with Charles Falco, a condensed matter physicist and an expert in optics.

20 Very Useful Photography Tips And Tricks The summer is here so now is the perfect time to make a lot of photos. If you want to look like a professional photographer, then you must enhance your pictures. Take a look at this article because here you will find 20 very cool tutorials which will help you transform an average photo into a work of art. How To Make Digital Photos Look Like Lomo Photography In this article, the author will teach you how to create lomo photos in a very easy way. 25 Beautiful & Modern Poster Designs Like we said before, if you want to become a better designer, the only way to do it is to learn by doing. But if you’re in search for inspiration on your next project, or if you’re simply itching to admire something with true aesthetic value, a curated collection of beautiful designs is the way to go. With this in mind, we at TNW’s Design & Dev channel present to you a list of 25 Beautifully designed modern posters.

Earthscrapers: Is Going Down Instead Of Up A Greener Way To Build? Evolo/via Every year, TreeHugger and all the architectural websites troll through the Evolo competition entries, looking for the most imaginative work from young architects with time on their hands. Sometimes you just have to shake your head and wonder at the creativity and drawing skills. In 2010, I did not pay a lot of attention to Bunker Arquitectura's proposal for Earthscraper, an upside down pyramid in downtown Mexico City. Bunker Arquitectura/via It was not a new idea, and it was not the best iteration of it that I had seen. Playing with Displace Filter in Photoshop I have been playing a lot with the Displace filter in Photoshop and I still get impressed with how powerful it is. Even though I have written some tutorials using it, I decided to try to recreate a different effect that I saw in one of the images submitted for the Daily Inspiration. It was a brick wall deformed like it was made of cloth. So in this tutorial, or a quick-tips I will show you how to create a curtain made of bricks or how to deform a brick wall as it was a curtain. To do that we wil use a few stock photos, layer adjustments and the Displace filter in Photoshop CS5.

I seek images that don't exist I seek images that don't exist Map works by Matthew Cusick Title: Adam Zagajewski Lines from "The Room I Work In," translated from the Polish by Clare Cavanagh: I seek images that don't exist, and if they do they're crumpled and concealed like summer clothes in the winter, when frost stings the mouth. via Web Urbanist via BibliOdyssey Will 50 Watts 10 creative shopping bag designs Shopping bags is an item that pretty much every shop has to use. Strangely, most shops use simple logos or visuals on their bags and very few try to be creative with it. These ten examples should inspire you. 1. 19 Amazing Paintings, Not Photos One of my favorite things I like to do on this site is share the work of amazing artists. These seven artists were chosen because each has the ability to create paintings so realistic they look like pictures. These mind-blowing, hyper-realistic scenes are made by using nothing but oil-based paints on linen or canvas. Though some critics may discount their artistic ability, saying that creating paintings from photos isn't "true art," I happen to disagree.

25 Helpful Tutorials for Lighting Effects in Photoshop Photoshop allows designers with unlimited possibilities when it comes to creative effects, including lighting effects. There are plenty of different ways to create lighting effects in Photoshop, and there are equally as many different possible uses for them. If you’re interested in learning more about how to create awesome lighting effects in your own work, here are 25 tutorials that can help. Looking for hosting? Dream Worlds Revealed On Canvas Along with some magnificent dreams, Jacek Yerka finds inspiration for his masterful paintings from his childhood memories: the places, remembered feelings and smells of 1950′s Poland. He studied fine art and graphic design before becoming a full time artist in 1980… and we’re glad he did. His paintings will take you through incredible worlds of imagination, bending reality in captivating and clever ways fit to inspire a novel or film.