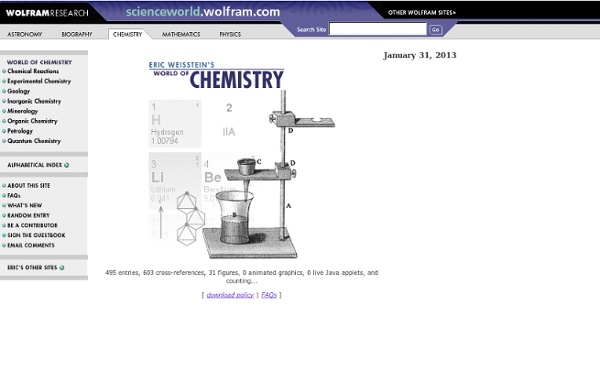 Hi-Res Images of Hydrogen Nonmetal, mass: 1.008 u, 2 stable isotopes (1, 2), abundance rank (earth/space): 9/1 Click image to magnify. Vial of glowing ultrapure hydrogen, H2. Original size in cm: 1 x 5. Hydrogen is the lightest and simplest element and, with a ratio of 80%, is the main ingredient of the visible universe. 20% consist of helium, the ratio of the heavier elements is below 1%. Right: The Great Orion Nebula, 80% hydrogen. The images are licensed under a Creative Commons Attribution 3.0 Unported License, unless otherwise noted. Molecule of the Month Welcome to the Molecule of the Month page! This is one of the longest running chemistry webpages on the internet. Each month since January 1996 a new molecule has been added to the list on this page. The links will take you to a page at one of the Web sites at a University Chemistry Department or commercial site in the UK, the US, or anywhere in the world, where useful (and hopefully entertaining!), information can be found about a particularly interesting molecule. If you wish to contribute a Molecule of the Month page, just email me the URL and I'll add you to the list at the next opportunity. What do I need to see the pages properly? See here for all the details of software and helper files you require. See here for a list of the awards and citations received by this page and a disclaimer. Above is a drop-down alphabetical list of all the molecules. Buy a book containing many of these molecules!

Home Common Compound Library A searchable database of over 800 common compound names, formulas, structures, and properties. Companion Notes Hyperlinked notes and guides for first semester general chemistry. Construction Kits Flash-based kits for building chemical formulas, names, equations, and problem solutions. Articles Featured articles, books, and tutorials. Toolbox Interactive graphing, popup tables, and calculators. Tutorials Index of self-guided tutorials, quizzes, and drills on specific topics. 50 Awesome Chemistry Videos For The Busy Science Teacher Though we don’t often recognize it, chemistry defines nearly every element of our everyday lives. From the reactions that fuel the sun to the biology of our bodies to the technology in our gadgets, chemistry is at the heart of everything we do and is the central science that unites biology, physics, geology, astronomy, medicine, and countless other fields. Yet chemistry doesn’t always get the credit and recognition it deserves for playing such an awesome role in, well, everything. If you’ve been slighting chemistry, there’s no better time to give the field the credit it deserves than National Chemistry Week. Founded in 1987, the week-long event has helped bring awareness to the role chemistry plays both in our lives today and in our future. Amazing Reactions and Experiments From incredible explosions to chameleon-like color changes, these experiments and demonstrations showcase some of the coolest reactions in chemistry. Lectures Courses Fun Miscellaneous

Artificial Robotic Hand Transmits Feeling To Nerves Astro Teller has an unusual way of starting a new project: He tries to kill it. Teller is the head of X, formerly called Google X, the advanced technology lab of Alphabet. At X’s headquarters not far from the Googleplex in Mountain View, Calif., Teller leads a group of engineers, inventors, and designers devoted to futuristic “moonshot” projects like self-driving cars, delivery drones, and Internet-beaming balloons. To turn their wild ideas into reality, Teller and his team have developed a unique approach. It starts with trying to prove that whatever it is that you’re trying to do can’t be done—in other words, trying to kill your own idea. As Teller explains, “Instead of saying, ‘What’s most fun to do about this or what’s easiest to do first?’ The ideas that survive get additional rounds of scrutiny, and only a tiny fraction eventually becomes official projects; the proposals that are found to have an Achilles’ heel are discarded, and Xers quickly move on to their next idea.

CLUSTER - divulgación científica Penn study shows why sleep is needed to form memories PHILADELPHIA – If you ever argued with your mother when she told you to get some sleep after studying for an exam instead of pulling an all-nighter, you owe her an apology, because it turns out she's right. And now, scientists are beginning to understand why. In research published this week in Neuron, Marcos Frank, PhD, Assistant Professor of Neuroscience, at the University of Pennsylvania School of Medicine, postdoctoral researcher Sara Aton, PhD, and colleagues describe for the first time how cellular changes in the sleeping brain promote the formation of memories. "This is the first real direct insight into how the brain, on a cellular level, changes the strength of its connections during sleep," Frank says. The findings, says Frank, reveal that the brain during sleep is fundamentally different from the brain during wakefulness. "We find that the biochemical changes are simply not happening in the neurons of animals that are awake," Frank says. A molecular explanation is emerging.

MyChemicals | CAMEO Chemicals | NOAA Nanotechnology Basics Home > Introduction > Nanotechnology Basics Nanotechnology Basics Last Updated: Friday, 14-Jun-2013 09:28:04 PDT What is Nanotechnology? Answers differ depending on who you ask, and their background. Coined as "nano-technology" in a 1974 paper by Norio Taniguchi at the University of Tokyo, and encompassing a multitude of rapidly emerging technologies, based upon the scaling down of existing technologies to the next level of precision and miniaturization. Foresight Nanotech Institute Founder K. In the future, "nanotechnology" will likely include building machines and mechanisms with nanoscale dimensions, referred to these days as Molecular Nanotechnology (MNT). Click image for larger version. This image was written using Dip-Pen Nanolithography, and imaged using lateral force microscopy mode of an atomic force microscope. It uses a basic unit of measure called a "nanometer" (abbreviated nm). There are one billion nm's to a meter. One thousandth of that is a millimeter.